(as reported by Dilly) 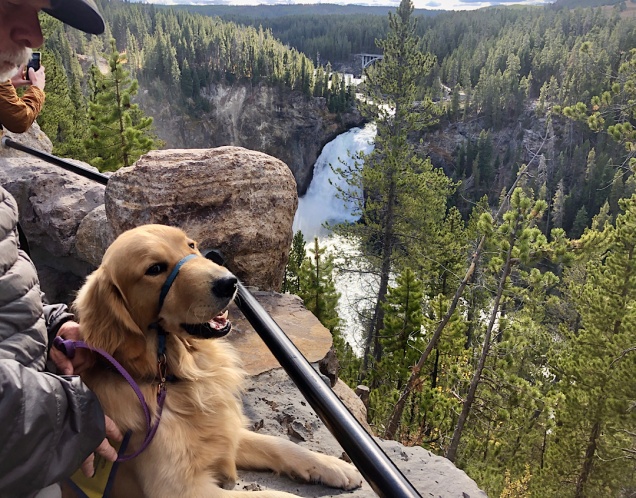 My pack and I got back from the road last week, and I have to tell you: life has been pretty boring since then. So I’ve volunteered to briefly shift my attention from Sitting and lying Down and Speaking to… Reporting. My puppyraiser/Mom usually handles this task, but on our recent trip she (my p/M) didn’t find anything interesting to write about. She’d be the first to say she had a wonderful time. But really.

(Excuse me while I yawn.)

We drove 2600 miles but never had a flat tire or ran out of gas or got into any accidents. No one asked for bribes or tried to kidnap us. We visited five national parks (and a couple of lesser ones). But who doesn’t know those places are amazing? (I’ll admit I didn’t. But I’m a one-year-old aspiring service dog.) To most folks, that’s not news.

I, however, see (and smell) things from a different perspective. Here are five of my most important takeaways from our adventure:

1) Flying is much more interesting than being driven around in a kennel. And traveling out of a kennel is (slightly) better than traveling inside one.

I flew once before, when I was 8 weeks old and Canine Companions for Independence (CCI), the organization that owns me, shipped me down from Northern California to my San Diego puppyraiser/parents. But for all their travels, my p/ps never before had flown with any CCI puppy. (I’m the 9th one they’ve raised.) Despite their trepidations, our flight from San Diego to Salt Lake City went well. The nice man at the Southwest Airlines counter didn’t even ask to see the rabies-vaccine documentation my p/M had brought along. (I mean, duh, it’s pretty obvious I’m not rabid.)

He gave us boarding passes that let us go first through the jetway,

so we had tons of room, sitting in the first row. I Stayed in a perfect Down position when the flight attendant gave her speech,

and although I got a little nervous during the take-off (and later, the landing), my p/M gave me the Lap command and let me look out the window. I found the sights out the window intriguing, if slightly creepy.

After that, we got around in a rented van. My p/ps had checked a travel kennel for me to ride in. But after a while, they started letting me ride loose, like a Regular Big Dog. Sometimes I took advantage of this, sitting on a seat and looking out the window.

Just as often, I napped.

2) Weather can be more interesting than I ever imagined.

I got a big lesson in this our first afternoon in Jackson Hole (Wyoming). My p/D had taken me out for a little afternoon stroll around the compound where we were staying when suddenly the sky got dark and I was being pelted with hundreds of little pebble-sized pieces of ice! Hail, people were calling it. I never saw the like of that in San Diego! 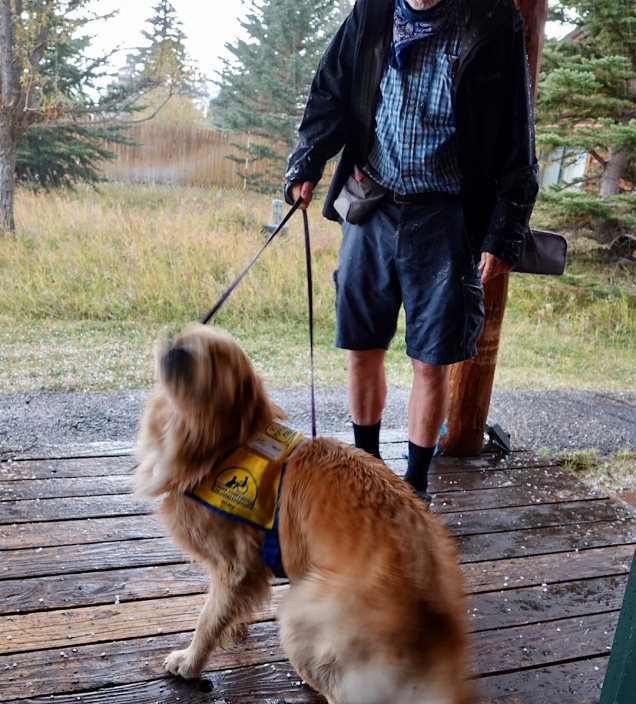 Several days later when we had moved just outside Yellowstone National Park, my p/M took me out for my morning constitutional, and fluffy white stuff was falling out of the sky. That was cold too, but at least it didn’t hurt! 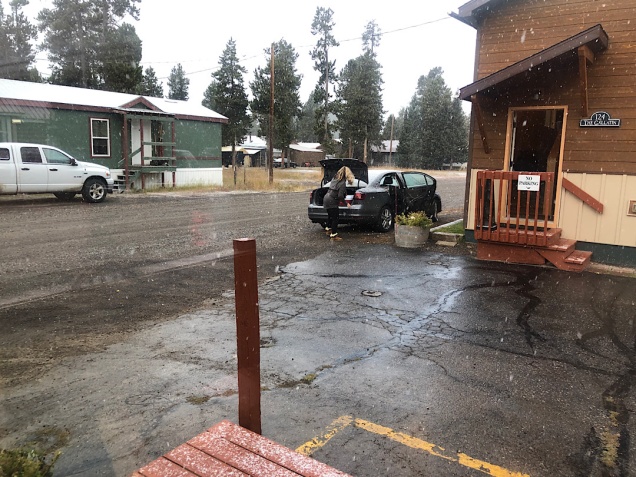 And pretty soon the sun was shining again.

We hiked an awful lot. One day (I think we were walking along the Rim Trail at Bryce Canyon National Park), my p/M sighed and said, “Dilly, it’s really too bad this can’t appreciate these sights.” They were looking at stuff like this:

My p/D piped up, voicing what I would have said (if I could talk). “Dilly says you can’t begin to appreciate all the smells.” Man, did he get that right! Sometimes there were scary smells, like this stuff, which was HUGE and filled with berry seeds. I didn’t want to get anywhere close to whatever creature produced it. 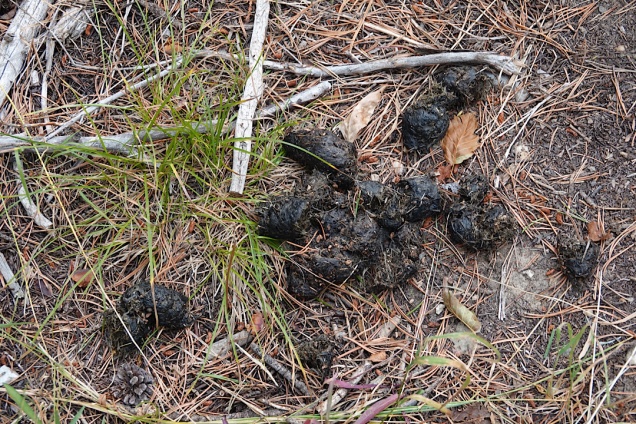 Day after day at Yellowstone, we hiked past what surely must be some of the weirdest smells on the planet.

But even the simplest stroll in a forest made me want to close my eyes and savor the symphony of scents produced when streams and leaves and pine trees and animals come together.

After Yellowstone, my p/ps and I drove to Craters of the Moon National Monument and Preserve (in southern Idaho). It’s not actually the moon but a vast, crater-pocked area that was created when lava flowed out of fissures in the Snake River plain between 15,000 and 2,000 years ago. It’s a stark, alien landscape that did NOT smell anywhere near as interesting as the Grand Tetons or Zion canyon. And the scrunchy black gravel kind of hurt my paws. 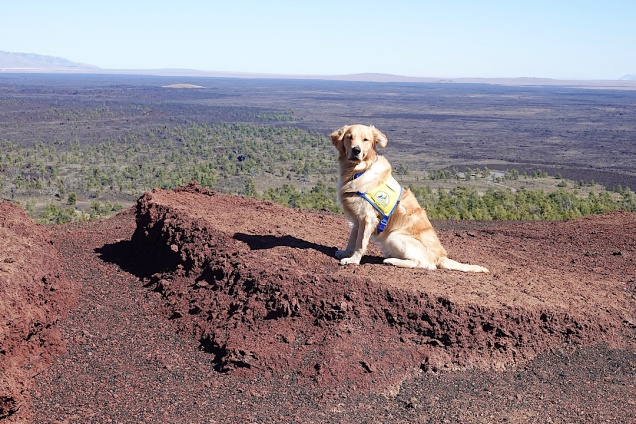 5) I’m thinking about a career change.

Everywhere we went, I had to wear my official cape and halter and leash (on which I pulled about 1000 times more often than I should have). But I did get one taste of paradise.

This happened when we visited my p/M’s uncle and aunt. They live on a farm in a small town in Utah. Before sunset, we went for a walk through the farm’s corn fields. I was on my leash, as usual, but then we stopped and suddenly they released me. For a moment I was so stunned I couldn’t move. Then I went berserk with joy – racing up and down the road, kicking up clouds of dirt, leaping and twisting and finding sticks and dried corn cobs and stones to chew. 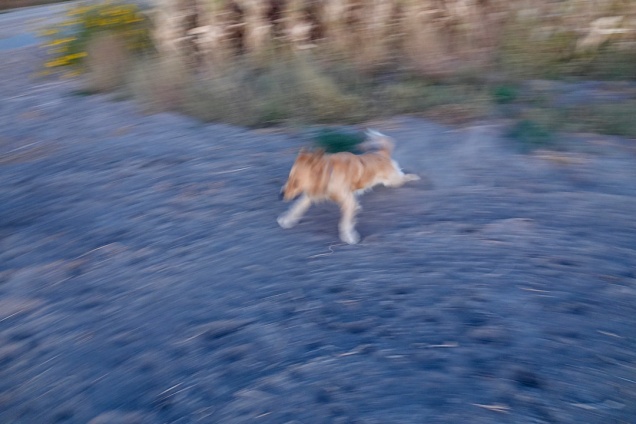 My ecstasy was so obvious, my p/ps brought me back early the next morning. Again I romped and rollicked.

Everyone tells me it will be a great thing if I graduate and work in a life of service. I say….. maybe. But I’m pretty sure it wouldn’t be as great as life on a farm.