Here’s the biggest thing I’ve learned from this road trip. If you’ve grown tired of today’s world, if you’re drowning in the digital flood, twisting in the social-media tendrils, overcrowded and over stressed, you might be happy living in the far-northwestern stretches of California (where we spent the five days from Saturday to Tuesday). It felt like we got there in a time machine, rather than our aging Chrysler van. We passed through stretches in which we were more informationally isolated than we were in the Congo, earlier this year. No (T-Mobile) cell phone service; wi-fi that simply didn’t work, even though it was supposed to. We walked Dilly down sections of Highway 101 — the main road connecting the coastline to the rest of the world — when no cars passed us for minutes at a time. Town signs often reported populations in the hundreds; five-digit ones were rare. Buildings in the centers of these villages remind me of those from my childhood. Or maybe my grandparents’ childhood.

The coastal vistas were as beautiful and empty as any I’ve seen anywhere. 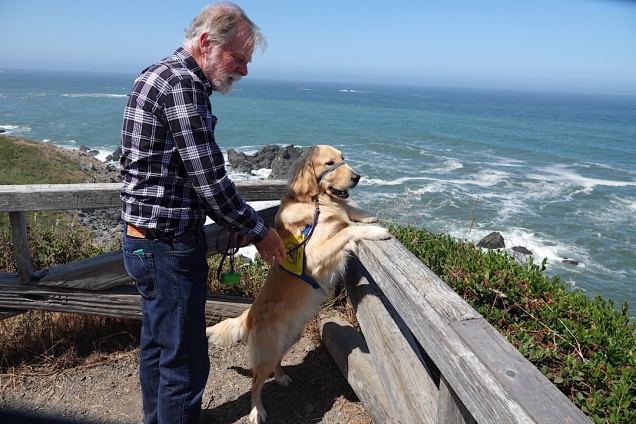 “Why don’t more people live here?!” I asked Steve, several times. (I had trouble retaining his answer. It made sense but at the same time seemed incredible.) It’s hard to get to these parts, he pointed out. The rugged Klamath mountains cram right up to the coast. Carving roads through them (then maintaining them), looks to be a brutal task. Nor is it easy to make any kind of a living. Even pot-growing, once the economic engine in these parts, reportedly isn’t what it used to be since legalization. Tsunamis can strike at any time and wreck havoc.

Then there’s the weather — gray, sodden, and dreary for much of the year. In the height of summer, we enjoyed some sunny spells, but the daytime highs rarely surpassed 60. Nights, the temperatures dipped into the 40s.

For all those reasons, I wouldn’t relocate here. But none of those factors dampened our pleasure in visiting. They in no way interfered with the great thrill accessible here: the chance to spend time with old-growth redwood trees.

Redwoods can be found all the way from Santa Cruz north to the southern reaches of Oregon. Many of them look stately, tall, impressive. But the vast majority — something like 95% —are relatively young specimens that reached for the sky only after the woodchoppers plundered their forebears. To the loggers who found their way to California in the wake of the Forty-Niners, the massive old redwoods were as good as any gold. Did those guys realize they were destroying arboreal gods that were already massive when the last Roman bastions fell? Did they reflect that what they sawed and chopped and floated out to sea to become house frames and fence posts was standing, shading, exhaling oxygen when Jesus was newborn?

I have no idea. But in California’s far northwest corner, in Redwoods National Park, the last few ancient redwoods still thrive. These are trees as tall as a football field is long; too wide in diameter to be spanned by a couple of adult humans. They’re the tallest trees on the planet, and while only half the age of the bristlecone pines, they still feel older than God.

We hiked at their feet, and I couldn’t stop exclaiming childishly, inarticulately: “Wow.” The forests are cool and shady. The ground underneath is springy and soft. 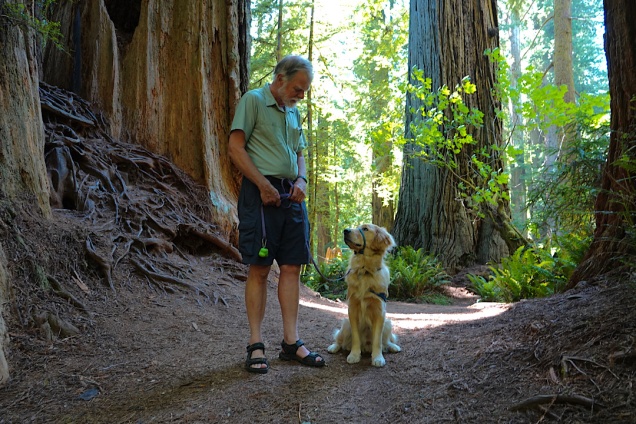 The path ahead of us invariably looked shorter than the trees were tall. The scented air invigorated me, and the sculpted shapes surrounding us often stopped us in our tracks. 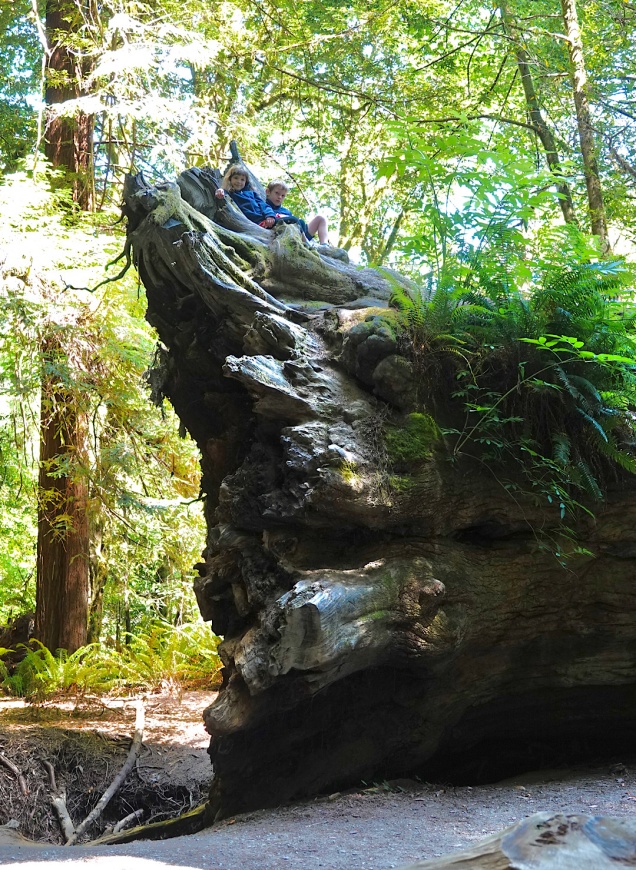 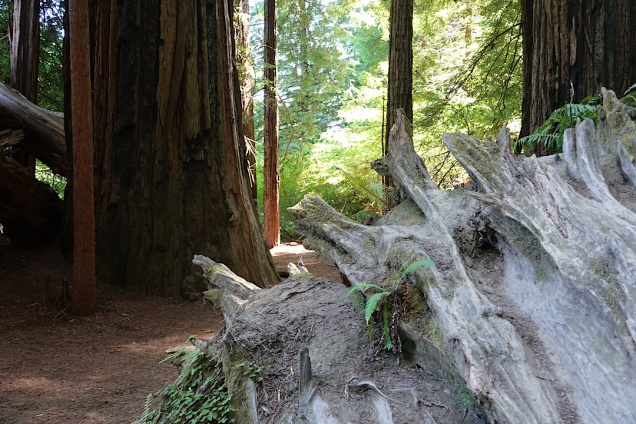 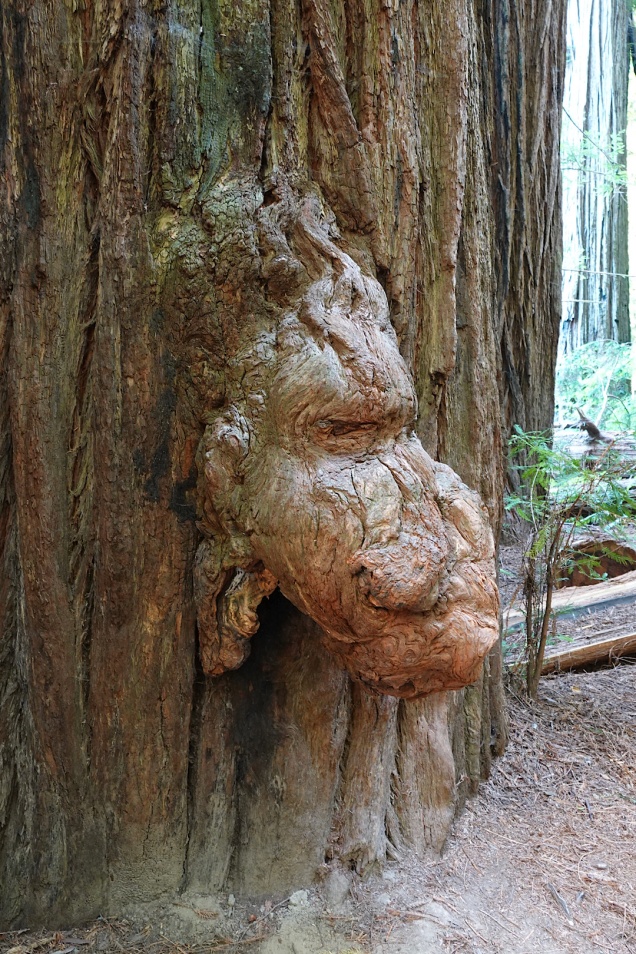 It’s a landscape that competes with the most breathtaking anywhere, I think, and yet it rarely shows up on lists of the natural wonders of the world.

Steve and Dilly and I spent two nights in a cabin in Klamath, then three more in another isolated redwood grove in Mendocino. We didn’t exclusively hike in the redwoods. We found a path to a eerie solitary beach. 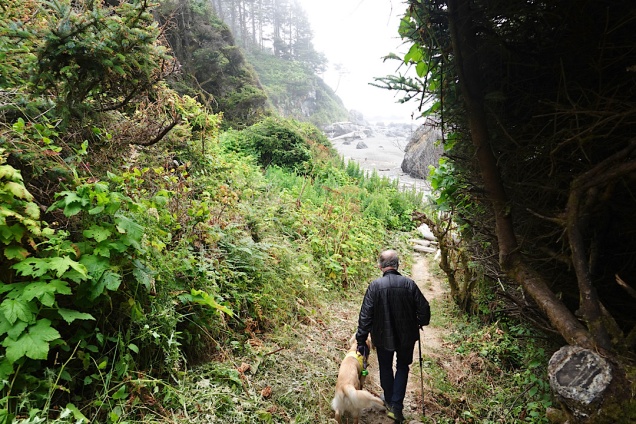 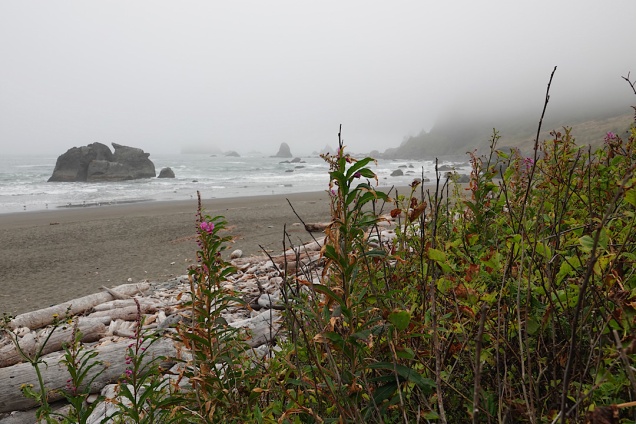 We spent an afternoon exploring a canyon whose walls are coated with ferns. 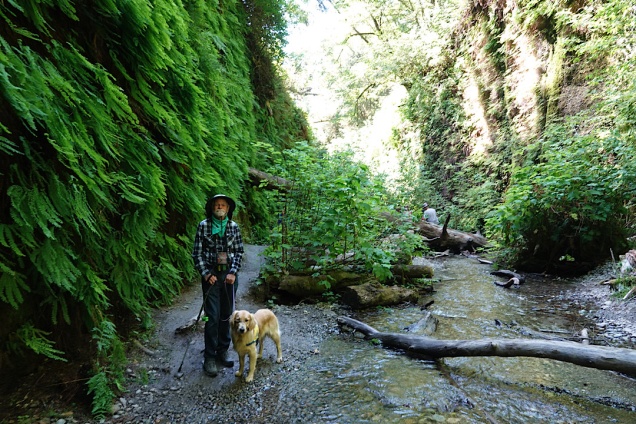 We got close to wild elk.

Another morning we hiked up the mouth of the Big River.

We resisted paying to drive through one of the touristic tree wonders. 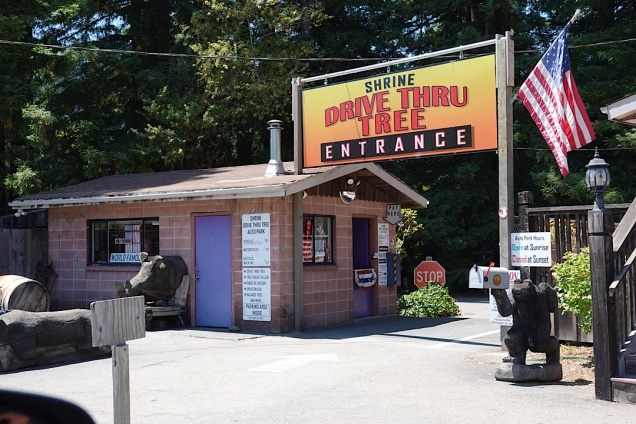 But we drove the Avenue of the Giants, where the huge trees crowd so close to the road people put reflectors on them as a warning.

Then Tuesday we headed south along Highway 1, skirting thrilling precipices (no shoulder! No guard rails!)…

…until we crossed the Golden Gate Bridge and were back in Civilization. We slept in Santa Cruz last night and will spend our final night on the road in Santa Barbara. All that will be anticlimactic. Those hikes through the otherworldly, timeless woods were the climax.

7 thoughts on “The land time forgot”