I can’t say it has always been my dream to sleep in an Airstream, one of those iconic shiny aluminum travel trailers. Still, every time time I notice one out and about, the stylish design tickles me. So when the opportunity arose to experience one on a recent night in greater Los Angeles, I couldn’t resist.

We were going to LA to attend an 8 pm concert at the Hollywood Bowl, meeting our son and his family there. At the moment I am flush, if not with cash, with Guest Points acquired through one of the oldest and largest home-exchanging organizations (homeexchange.com). Looking for options on their site, I spotted the Airstream permanently parked in the Burbank backyard of a couple, Eva and Lars, and their four children. It “cost” only 150 Guest Points and looked charming, in the photos. And it appeared to be only a skip and a jump from the family’s quiet neighborhood to Hollywood. Steve was skeptical, but he acquiesced. I set up the exchange (of the points for the one-night stay), and last Saturday morning, we packed small bags and headed north.

First we stopped at the newly renovated Beverly Center mall in Beverly Hills, where I wanted to visit the large outpost of Uniqlo (the Japanese clothing maker whose casual wear several friends have raved about, but which I had never seen first-hand since the chain has no stores south of Orange County). The mall felt a bit like a spaceship, and the Uniqlo was very interesting. I bought a few $15 t-shirts made of a high-tech material that supposedly heats up any moisture you emit to keep you warmer. We’ll see how that works.

But then we had to hustle on to Burbank, which felt like it was about three times farther from Hollywood in reality than it had been in my head. Eva and Lars greeted us and showed us the trailer. If anything, it felt more attractive than it looked online, being surrounded by a nicely landscaped backyard and sitting area. 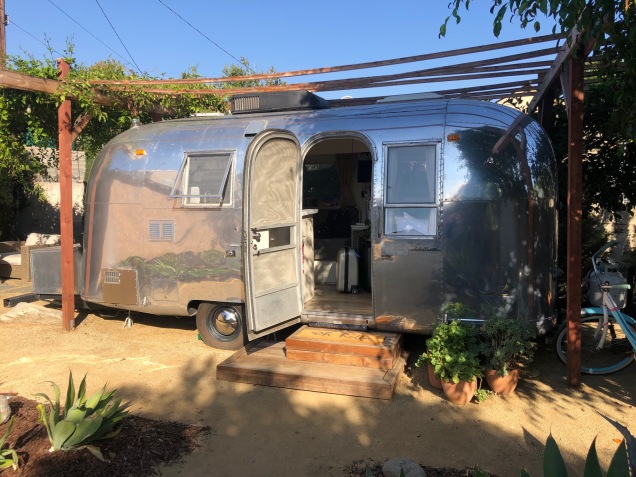 Restored to pristine condition, the interior seemed roomy enough, and when we slept on it later that night, the queen-size bed was surprisingly comfortable.

If that aspect of the weekend proved underwhelming, the other main elements exceeded expectation. To avoid the hellish traffic and parking nightmares around the Hollywood Bowl, we drove our van to the North Hollywood Metro station and parked on the street nearby. Then we rode the metro two stops to Hollywood and Highland, walked the mile or so to the Bowl, and dined on the picnic dinner we had packed and carried with us. The transit part all took more than an hour, but doing it by car would have taken at least as long and been much more stressful.

Furthermore the people-watching on the metro and the walk through Hollywood was unsurpassed, as it was inside the Bowl (which neither Steve nor I had ever seen, in all our years of living in Southern California.) Genial and head-spinningly multicultural, the huge crowd seemed to be in a great mood.

The program featured the music of “Game of Thrones,” performed by the show’s original orchestra and directed by composer Ramin Djawadi. Once the concert got underway, we were blown away both by the sound and beautiful setting. I’m not sure if we’ll ever get back for another concert, but (unlike the Airstream Experience), I would like to.

By the time we tumbled into bed (around midnight), it felt like we’d surveyed a broad swathe of LA Life. But the next morning we got more when we left Eva and Lars’ place and drove to MacArthur Park, hoping to participate in the “Heart of LA” CicLAvia event taking place from 9 to 4 pm Sunday. Inspired by a venerable bicycling event that began decades ago in Bogotá, Colombia, LA versions of it began 9 years ago and have since attracted more than a million and a half people. The idea is to close key streets in a given area and turn them over to pedestrians, bikers, and other folks on wheels (skates, boards, pedicabs, and more) for use as a public park throughout the better part of a day. I participated in one several years ago in San Clemente, but I’d never done one of the LA versions.

One problem was: we couldn’t bring our bikes (because we knew we would be transporting our son and his family and their luggage back to San Diego). But a savvy friend had alerted us to the Smart Metro Bike program that’s part of the LA metro system. I’ll confess Steve and I were skeptical we could find two of those bikes and get access to it. But after very few minor hassles, we succeeded!

We biked from the park down 7th Street to the heart of downtown, then turned onto Broadway, passing iconic gems like the Bradbury Building and Clifton’s Cafeteria and the LA Times Building as well as monstrous new public edifices such as the police department headquarters. We took the arm of the route that headed southeast, skirting Little Tokyo and crossing the marvelous 4th Street Bridge over the railway lines.

Sadly, we ran out of time and had to turn back before making it to Mariachi Plaza in Boyle Heights. We missed altogether the arm that went to Chinatown.

If we’d had the whole day, we could have easily spent it stopping to view the art and architecture along the route, listening to music, eating at many dozens of options. We didn’t. But it makes me happy to know it’s not that far away. We can go back.