On December 20, five days after Steve and I returned from our nine-week Asian adventure, the New York Times published an article by its Frugal Traveler entitled “9 Things You Should Know Before You Go to India.” A friend forwarded it to me with the question, “Did all these make your list too?” Now that I’ve dug my way down to that level of my in-box, I have to say: sure. The items in the article were practical tips having to do with credit cards, visas, phone service, street food, and the like. But I’ve also been reflecting on some bigger things that caught us unawares. Five stand out.

The Pollution — I knew the air in India might be bad, but I was unprepared for the depths of its wretchedness. In the course of our trip, I discovered that the weather app on my iPhone includes an “air quality index.” Since we’ve gotten back, I’ve been checking it and have learned that San Diego’s air typically falls in the 20-50 range (“Good”), occasionally dipping up to moderate pollution levels. When we arrived in Bengal, however, the index number was about 150 (“Unhealthy for sensitive groups”), and it got worse city by city after that, through “Unhealthy” then “Very Unhealthy” then “Hazardous” (in the 300-500 range). By the time we hit Jaipur in Rajasthan, it was over 500, literally off the chart. (“Don’t Even Think about What This is Doing to Your Lungs!!!”) I started coughing maybe a week after our arrival October 15 and still haven’t totally stopped (though I feel 99% better).

Beyond the physical ill effects, the environmental despoliation was depressing. The air was foul not just here and there but every single place throughout the north and at least down to Mumbai (Bombay). Kerala in the far south was slightly better, though hardly pristine. Seen through clean air, much of the Indian landscape would be beautiful. Its absence is heartbreaking.

Could I have done anything differently? Maybe. October and November have a reputation for being the worst months for Indian air pollution. Summer is supposed to be somewhat better. But the heat and humidity then are legendarily staggering.

A simpler solution might be to pack air-filtering masks. I actually considered this but rejected it on the grounds they would take up too much space, and the locals might think we were bizarre. If I were doing it again, I wouldn’t hesitate to take masks.

Not quite as awful as the air was the noise pollution in the streets, caused by every vehicle honking at every other one, incessantly. It frayed our nerves far more than I anticipated (but it probably didn’t do as much permanent damage to our bodies). Here’s a small sample, which sounds way less noisy than many of our rides.

Crime and other street hassles — We never felt menaced by street criminals, a nice discovery. We never felt unsafe, and we walked a lot, even at night in poor neighborhoods. I know some single women travelers have had grim experiences in India, and maybe we just got lucky. Still, no locals ever warned us not to venture into certain areas, as was common last spring when we traveled in Brazil. If there are muggings in India, we sensed they are rare. That’s liberating, and we appreciated it daily.

We also never were overwhelmed by beggars. They exist, of course, some with hideous deformities. But we never felt besieged by them. More ubiquitous, and often irritating, were the hustlers and street hawkers. To the latter I could smile and say “No thanks,” or “Maybe later!” But the friendly young fellows who called out, “Where are you from?” presented us with more of a dilemma (usually several times daily). To ignore them felt rude but to answer always entangled us in arguments about why we didn’t want to buy whatever they were selling.

The Indian trains were not romantic — I had hoped they would be. Just a little. I think they once were, the traces of imperial glory lingering even when Paul Theroux wrote The Great Railway Bazaar 45 years ago.

We chose to primarily get around on trains hoping for a glimpse of that past and also figuring it would be safer to ride the rails than brave the insanity on the streets and highways or fly on regional airlines. According to global rail guru Mark Smith (aka The Man in Seat 61), the Indian passenger rail network is the biggest on earth in terms of passenger kilometers, as well as the world’s largest employer (with a staff of 1.5 million). Smith states unequivocally that the best way to see Indian is on its trains. So I followed his advice. 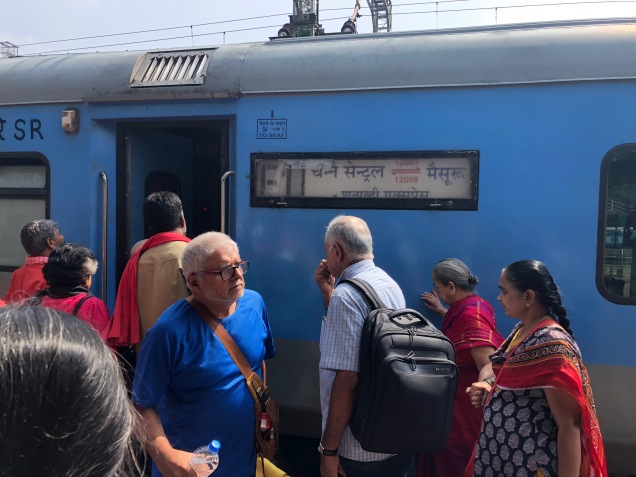 The results were mixed. I had a devil of a time obtaining an online account with the Indian rail system. I tried for weeks, following the instructions on their website, sending emails when the instructions didn’t work, trying to call someone, starting all over again. Only when I used a VPN on my desktop computer — connected to an Indian server that made it appear I was located in India — did the system finally let me register.

With an account, it was relatively easy to book tickets in advance, and that was great, since the train stations tend to be overcrowded and chaotic. On several occasions I was able to cancel or rebook tickets once we were on the road. We started doing this after it dawned on us that trains departing early in the morning and originating at or near the departure station had a greater chance of running on time.

We only booked passage in air-conditioned cars, so we always had reserved seats.  Sometimes our compartments were filled with more fellow passengers; sometimes fewer (depending on the class of ticket available). None of our trains came close to being luxurious, but they weren’t squalid. The best thing about them was the opportunity they provided to chat with Indian travelers. We had some entertaining and educational conversations, and when the talk wasn’t flowing, we drank in great views of the countryside.

The worst thing about our rail travel was its unpredictability. A few trains departed and arrived on time, with one or two even getting us in ahead of schedule. But several (like the “toy train” to Darjeeling or the train that was supposed to go from Kolkata to Gaya but instead went to Patna were nightmares. Sometimes the cars just stopped, inexplicably, and we waited to get moving again, sometimes for hours.

One other less than pleasant surprise was that the design of most stations requires passengers to climb up (and down) really high staircases to get up to walkways that let you cross from one track to another. Usually there are no escalators. We eventually figured out that many (most?) of the Indians hire porters to haul their suitcases over this obstacle course. Steve and I bristled at this, and not because of the (trivial) cost. “Why don’t we use the porters?” I wondered aloud one day. “Because it’s un-American!” he snapped. I knew what he meant.

In the end, we concluded that for trips longer than 5-6 hours, it would have been better to take regional planes (the few we flew on appeared to be well run). But for shorter trips, we would still choose the trains instead of hiring private cars and drivers, not only because the latter is so much more expensive. It felt like our chances of dying in transit, while not negligible, were lower on the trains than on the road. Moreover, even the fanciest private vehicles can’t avoid awful traffic and potholes, which in the end are more common and nerve-wracking than being stopped on a railroad siding.

Food was so inexpensive — We weren’t brave enough to eat the street food. But we also had no intestinal problems and could count on one hand the number of mediocre meals we consumed over the course of 9 weeks eating in various hotels and restaurants. Including our three days in South Korea and 10 days in Sri Lanka, for the most part we spent less than $15 per day per person for tasty food, drinks, and all snacks. We splurged on a dozen occasions, paying $45 or more for the two of us, but what we got for those meals was amazing. I’ll never forget the Bengali banquet that included about 75 different dishes plus drinks and cost about $100 for two.

Hindus aren’t pacifists — I suppose I knew this before we went to India. But I had no clue how deep and vicious the antipathy runs between some of India’s Hindu majority members and its Muslim citizens, an ancient tension that is currently being stoked by Indian prime minister Narendra Modi and his cronies in the Bharatiya Janata Party (BJP) and the even more hate-filled Rashtriya Swayamsevak Sangh (RSS).  We got many earfuls of this antipathy, talking to people. The Hindu extremists don’t just target their Islamic fellow countrymen. In Agra we heard about one young couple who had been murdered on their wedding day (the week before) by Hindus angered by the fact that the (Hindu) bride was marrying a Christian.