What to see? What to do? How do you plan activities in a place on the other side of the world that you’ve never seen before?

Before we leave home, I ask experienced friends for suggestions. I also read as much as possible, both guidebooks and (recent) online articles, blogs, and other sources. This gives me ideas, which I weigh in light of Steve’s and my idiosyncratic appetites.

And sometimes I just get lucky. This happened to us two days ago in Otorohanga, a small town about two and a half hours south of Auckland, where we spent our first night on the road. (For our first five nights, in Auckland, we stayed for free in a townhouse I arranged through homeexchange.com.)

We wanted to sleep in Otorohanga because it’s well-positioned between two of New Zealand’s biggest tourist attractions. (More on them below.) The Mohaonui Farmstay was reasonably priced ($80 for bed and breakfast) and well-reviewed on booking.com. I also figured it might be cool to sleep on a working dairy farm. As things turned out, we only had about 15 hours there, most of that time after dark. But in the few daylight hours, I was more or less continuously filled with peace and pleasure and delight.

Owners Marain and Noel Hurley greeted us and seemed happy to expound at length about the property, which has been in the Hurley family for decades. Today they share it with about 200 head of Friesian cows. They’re milked twice a day by a 56-year-old “tenant farmer” named Brent. He splits the milky profits 50-50 with Marain and Noel. I gathered that the farmstay operation is a recent diversification. Here’s the private cottage where we stayed: 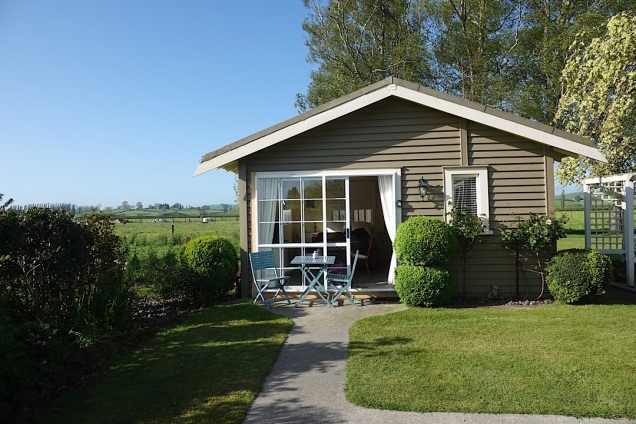 The weather had turned sublime. Toward sunset I sat in the chair that hangs from the large tree in back of the cottage. Calves in the paddock to my left pulled up mouthfuls of kelly green grass, shooting curious glances my way as they chewed.

Off in the distance, I could just make out the rest of the herd at the foot of a distant hillside.

We’d been sufficiently foresighted to pick up a roast chicken, some deli salads, and a bottle of wine at the Countdown grocery store in town. It felt great to hunker down in the cottage and climb into bed early. That set us up to wake before dawn to the opening overtures of a symphony of birdsong. (I think New Zealand’s birds must rank among the world’s most melodious.)

As soon as it was light, we slipped outside and through a back gate to reach the dirt road running through the middle of the Hurleys’ fields. 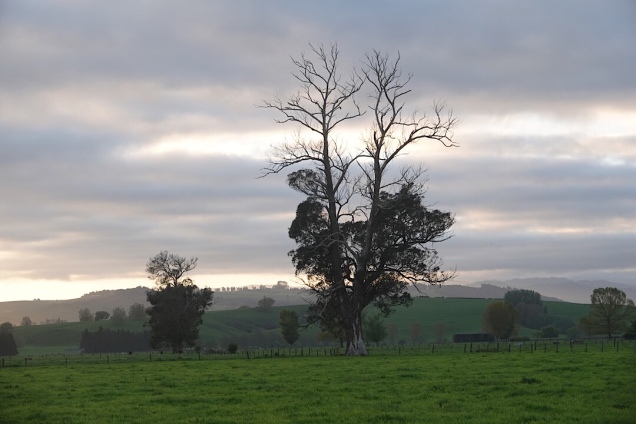 From time to time, cows filed past us, making their way on their own to the pasture of the day. (Apparently they’re rotated among 47 different areas.) 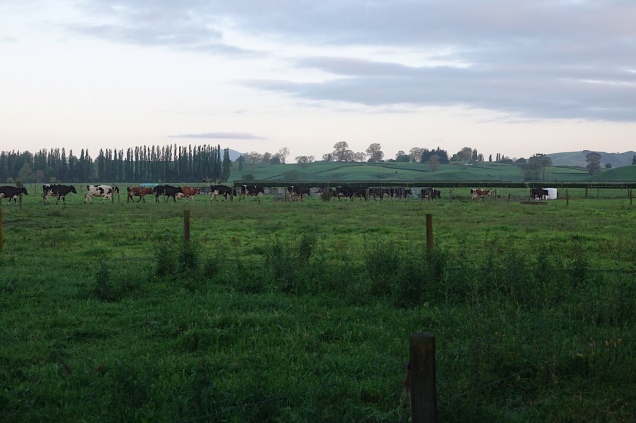 We eventually met up with Brent, another friendly fellow who answered even more of our agricultural questions.

A bit later, back in the cottage, we tucked into good coffee and delicious muesli, yogurt, and fruit until it was time to hit the road. I felt sad to go.

But there are amazing things to be seen in this part of North Island. They include the complex of caves in Waitomo. We toured only two of them, both filled with wonders.

Ruatari Cave is enormous and has fantastic formations, while the highlight of the Glowworm Cave is a boat ride through a passage illuminated only by some of the strangest creatures on the planet. These “glow worms” emit a bioluminescent blue light from their tails. Assembled en masse, they look like a field of fairy lights. They cling to the damp rock walls in these caves and spin gossamer threads that hang down for about a foot. Insects attracted to their light get stuck in the threads, which the worms then reel in. Talk about eating in!

On the morning when we had to leave behind the dairy farm, our destination was Hobbiton, the 12 acres where director Peter Jackson filmed the Shire scenes for The Lord of the Rings and The Hobbit. I had thought this outing would be fun, but it exceeded our expectations.

Then we moved on to the town of Rotorua, famous for being a center of Maori culture… 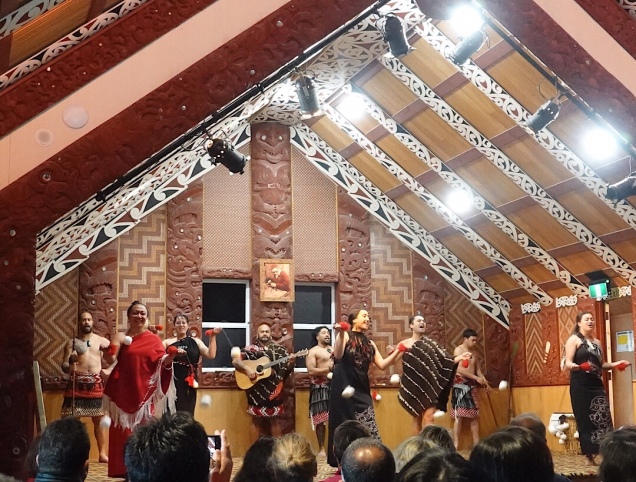 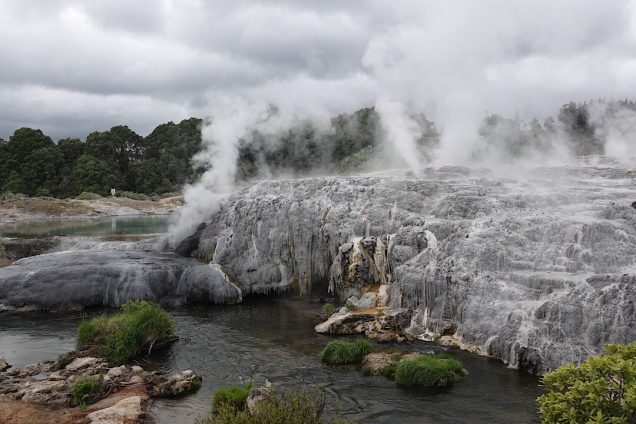 Today we took in a bunch of both, then spent an hour soaking in pools fed by hotsprings… 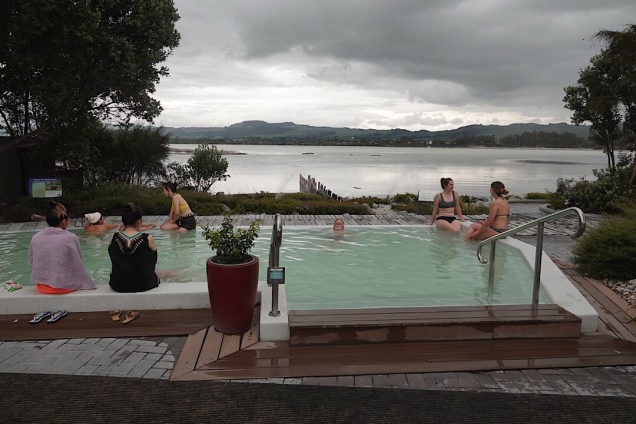 Tomorrow Steve has the tough task of driving us all the way to Wellington, at the south end of this island. Folks say we’ll see more wondrous sights along the way. I expect we’ll find they’re right.