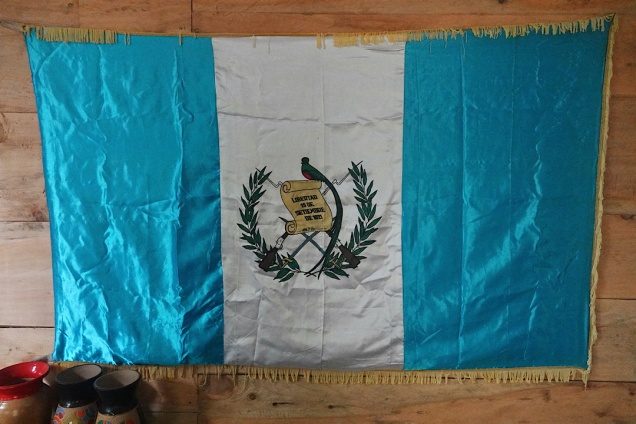 I like beautiful birds as much as the next person, but I’m no serious birdwatcher. I would have said spotting any particular bird would never shape the itinerary of any of my trips. Still, I knew that resplendent quetzals, gorgeous and elusive birds laden with powerful symbolism, are an icon in this part of the world. When border politics forced us to cut Belize from our journey and gave us three extra days in Guatemala, we decided to try to (metaphorically) bag this mystical avian.

I’d read that there’s a quetzal bio-preserve a few of hours north of Guatemala City. Moreover, this time of year is when the birds are mating and having their babies, hence it’s an optimal time for spotting them.

On the other hand, the Biotopo del Quetzal is not the easiest place to reach. Our Lonely Planet guide to Central America suggested we might be able to get there on a public Monja Blanca bus from Guatemala City. But… were these buses running, post-Covid? And how exactly would we get to one from our hotel? I couldn’t find ready answers. When a travel blog and Facebook led me to a driver named Alfredo Garcia, I emailed him and he responded promptly. We hired him to pick us up at our Guatemala City hotel the morning after our arrival and take us directly to quetzal country.

Quetzals live in the cloud forests of Central America. Historians tell us that the ancient Mayans thought they were gods and executed anyone caught killing the birds. What particularly tempts humans to kill quetzals are the male birds’ gloriously long tails; their feathers can grow to be 30 inches long. Although quetzals reportedly can be found in high chilly regions ranging from the Yucatán to Panama, Guatemalans particularly revere them. They made quetzals their national bird; put them on their flag and named their money after them. Alfredo pointed out to us that quetzals die in captivity. “So to us they are the symbol of freedom,” he said.

Alfredo turned out to be my ideal driver: skillful, smart, savvy, sensitive, and an agile conversational partner. He had told me about Ranchitos del Quetzal, located immediately next to the quetzal reserve, which itself is located down a heavily forested country road. At these basic lodgings, Alfredo personally had had excellent luck spotting quetzals over the years. He picked us up at our hotel in the capital at 9, and we arrived at the Ranchitos a little over three hours later. It had started drizzling when we set out, and the strength of the rain had built throughout our ride. But on the bright side, one of the young managers showed us a photo of a gorgeous male quetzal he had taken with his phone just a few hours earlier.

We ate a simple lunch — black beans, potato salad, a bit of salad. Then Steve and I donned pretty much all the outerwear we’d brought with us (not much), grabbed our umbrellas and hiking poles, and trudged the 100 meters down the road to the reserve. 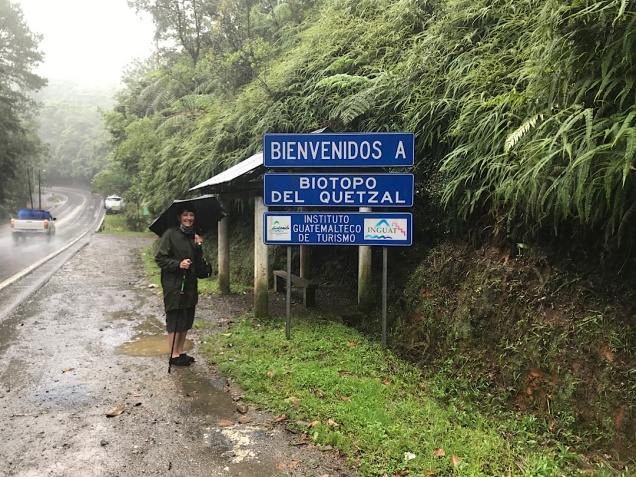 As cloud forests go, this was a lovely one. Our altimeter app said we were at 5500 feet when we set out, and from there, the path was all uphill, over rocky but well-tended trails. Towering trees, ferns of all sizes, orchids, bromeliads, wild ginger and other plants crowded in at every twist of the path, while a cold fog swirled overhead. 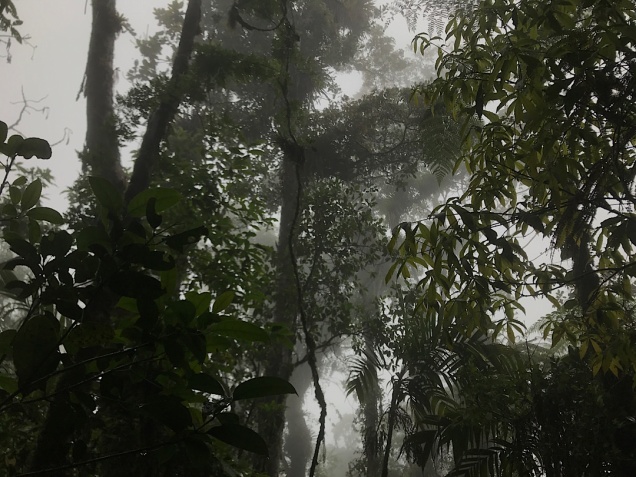 The trees protected us from the brunt of the rain, though droplets hitting leaves sounded like birds; they made me jump and crane my neck almost constantly, hoping to glimpse our quarry.

But we saw no quetzals and almost no other humans, except for one pack of young Guatemalan parents shepherding toddlers and toting a couple of babies, moving through the drenched, vertiginous wilderness as blithely as San Diego parents stroll through Balboa Park.

I began to brace myself for leaving the area bearing only a photo of the stuffed quetzal in the reserve’s tiny, unmanned visitor center.

But back at the Ranchitos, the manager told us to be on the porch at 5:30 the next morning, “and you will see a quetzal.”

It sounded enough like a promise that we did what he said. Once again, it was drizzly under cold gray skies. Steve and Alfredo and the manager and I stood and watched. We noted squirrels gamboling high in some trees. We heard birds singing and eventually saw a beautiful quetzal relative called a drogon perched on a wire.

We admired the big violet saber-winged hummingbirds whom we’d been seeing throughout our stay. 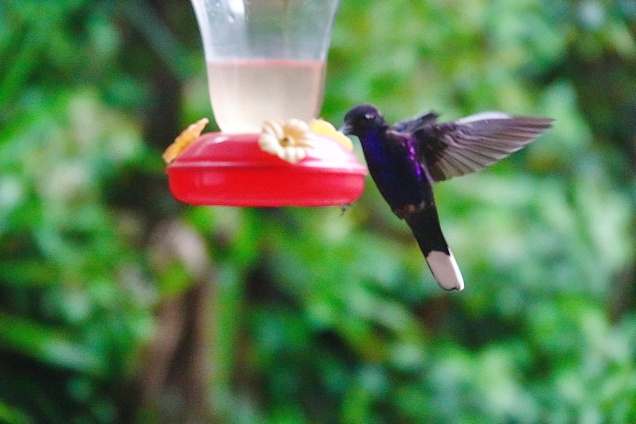 We milled about and didn’t chat much.

After an hour or so I had sat down on a stool and was meditating when some movement caught my half-lidded gaze. My first thought was that it must be some other small mammal, like the squirrel, with the capacity to be airboreal. Its very long tail to me looked rat-like. 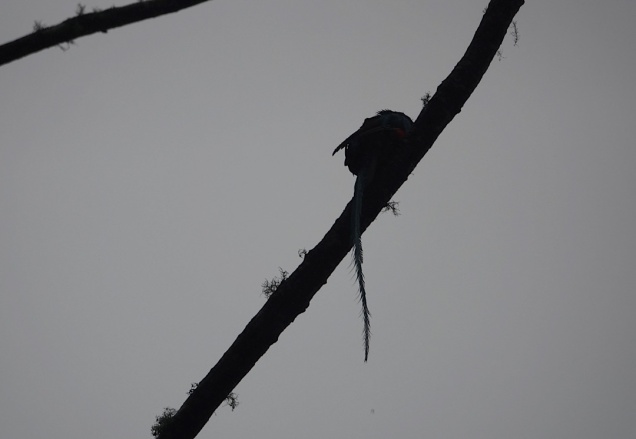 But then the creature flew to another perch.

I stared at that tail and the manager yelled. The steely early morning light made it hard to make out the bird’s brilliant red chest, but the tail looked like nothing I’d ever seen on a bird before: unmistakably a quetzal, Alfredo and the manager concurred. 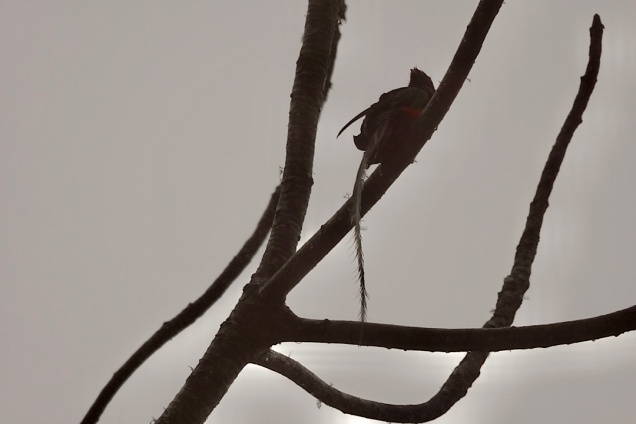 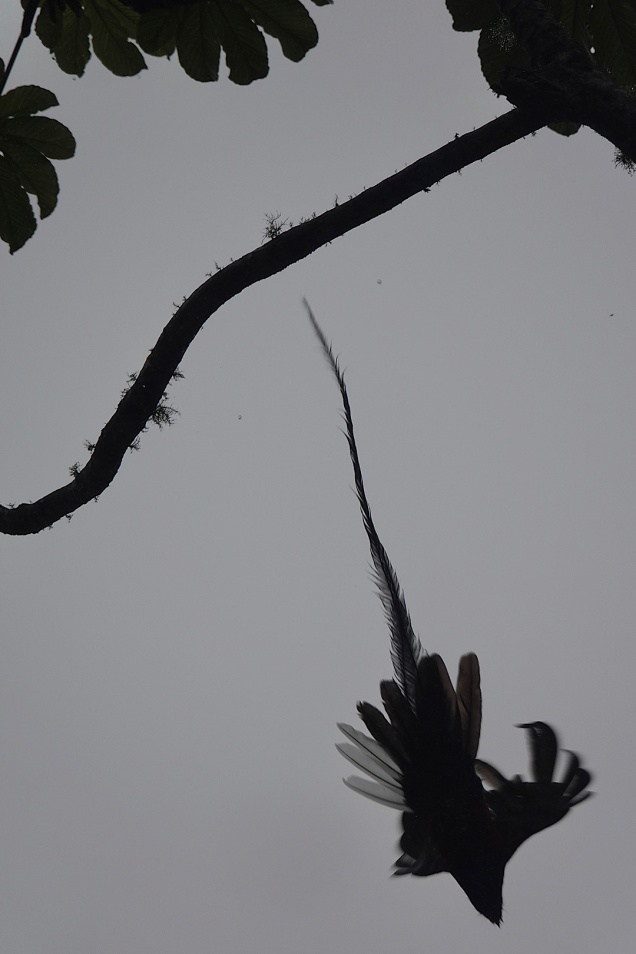 The four of us were ebullient, the way people get when they go to a lot of trouble to view exotic animals in the wild, and they get lucky. I felt proud of my quetzal pictures. They’ll help me remember what this very rare bird actually looked like. The cloud forest photos are less useful. They don’t come close to communicating what it’s like to move through that dense, drenched chilly realm. But I have added to my mental list of Amazing Quetzal Facts its power to get folks out of their comfort zone and into remote, resplendent forests that, if unphotographable, are hard to forget.