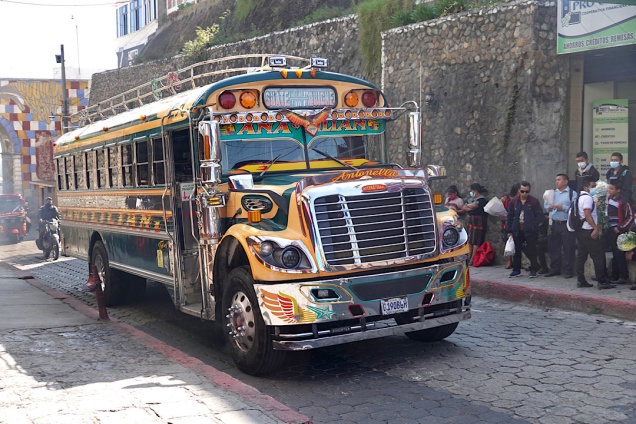 Someone might ask me: why would you take public buses to travel between cities in Guatemala? I might respond: why not?

Here are the reasons Steve and I used buses to get from Rio Dulce to Tikal. (We wanted to go to Tikal because it’s the site of fabulous Mayan ruins that rank among the most famous touristic destinations in Guatemala.)

1) Buses are one of the only ways to get between those two places. One alternative might have been to rent a car on our arrival last week and drive ourselves everywhere. But stories about the crazy Guatemalan drivers and difficult urban traffic scared us. The second alternative was to hire a private driver, as we did to get to the quetzal reserve and Rio Dulce (and will do again later in the trip). That’s the easy choice, but it’s also invariably expensive. No trains or planes or boats connect Rio Dulce and Tikal, so they’re not alternatives.

2) Buses are how ordinary Guatemalans get around.

3) Buses are not expensive. That’s why regular folks use them.

Here are the reasons we might have flatly rejected bus travel.

1) It’s invariably tricky to figure out. It’s not a big deal if you’re a native or you speak the local language like one. But I have often found bus schedules to be daunting.

2) On buses, things often go wrong, sometimes in smaller ways (they break down), sometimes spectacularly. (Their brakes fail and they go off a cliff and everyone on them dies.)

When I knew we wanted to get from Rio Dulce to Tikal, I emailed Wilmer, the manager at the Tortugal. He said our choices were buses or a private driver, and he promised to help us arrange something after we arrived.

As things turned out, the friend only took groups of 6 or larger, and Steve and I were the only people interested in going on Monday. With the promise of Wilmer’s help, we chose the other option: travel like most Guatemalans do.

Monday morning he took us in the launch to the town of Rio Dulce, then walked with us to the station where we bought tickets on a direct bus to Santa Elena. They cost $300 quetzals (about $39) for the two of us. I was happy to hear the guy behind the counter say the ride would take four hours (I had thought it might be closer to 6).

Less encouraging was that the next bus was expected between 9:30 and 10:30 (we had arrived at 8:30, hoping to catch what we thought would be a 9 am bus.) But we had plenty of electronic toys to entertain us and the tiny bus station was air conditioned, so we settled in for as long as it would take. 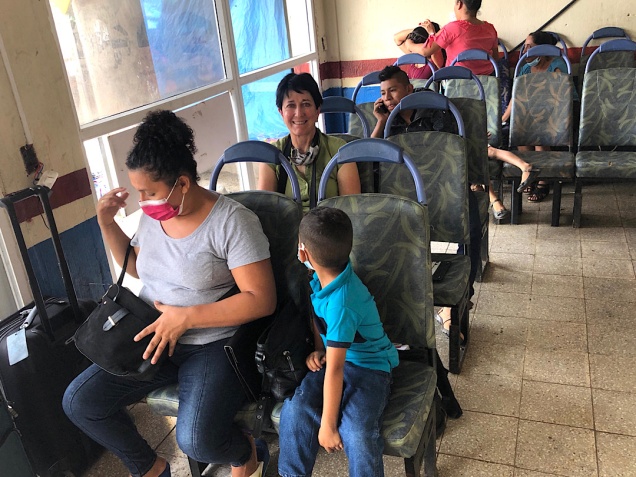 Siting there, I could summon few memories of uneventful bus rides in my life. I’ve had some, but I don’t remember anything about them. I usually don’t remember the traumatic rides either, but while waiting for the bus to Tikal, images flooded out of the part of my brain where I had repressed them. How could I have forgotten the Peruvian bus that broke down near the border of Bolivia, and the hours-long drama that followed, in which dozens of locals struggled to fix it? Or getting stuck on our “deluxe” bus in Colombia’s steam-bath heat, and having to ultimately transfer to a very much non-deluxe replacement? Or the homicidal Vietnamese bus driver who seemed intent on taking us to meet our maker? Along with thoughts of all those breakdowns and missed stops and awful delays, the thought also came back (duh!): when you’re on a Latin American bus, you are stripped of any illusion of control over your destiny (unless you believe in prayer.)

Miraculously, the bus did arrive at 9:30, and my refresher course in Bus Facts of Life continued.

Lesson One: The locals will always know what’s happening earlier than you do, and they will mobilize faster. That’s why you will get the last seats on the bus. Forget about sitting together.

Lesson Two: The concept of personal aural space does not exist. That’s why the 16-year-old guy next to you is uninhibited about broadcasting his favorite tunes from his phone. It’s why the six-year-old across the aisle blasts video games on his tablet and neither of the women flanking him tells him to tone it down.

Lesson Three: The bus will stop at random intervals and often it will be impossible to figure out why. On our trip, a guy in uniform boarded at one point and asked for IDs. I showed him an expired California driver’s license and he barely glanced at it. He didn’t demand anything of Steve (but Steve was wedged against the window in the row behind me, next to four Guatemalan guys.)

If it sounds like I’m complaining, I’m not. Nothing went wrong. We arrived at the Santa Elena bus terminal around 1:15 — 15 minutes before the ticket seller in Rio Dulce had said we would. A gaggle of men surrounded the bus when we disembarked, and I was braced to be hassled. Instead, when I said we wanted to get to Tikal, a brisk energetic guy led us to an office inside the large, clean terminal.

The man at the desk inside said he could sell us tickets ($19.50 for the two of us) on the only ride going directly to Tikal. It would be leaving in about an hour, he declared, which gave us time to eat the sandwiches Wilmer had packed for us.

Our ride arrived a few minutes late, and it turned out to be a van. 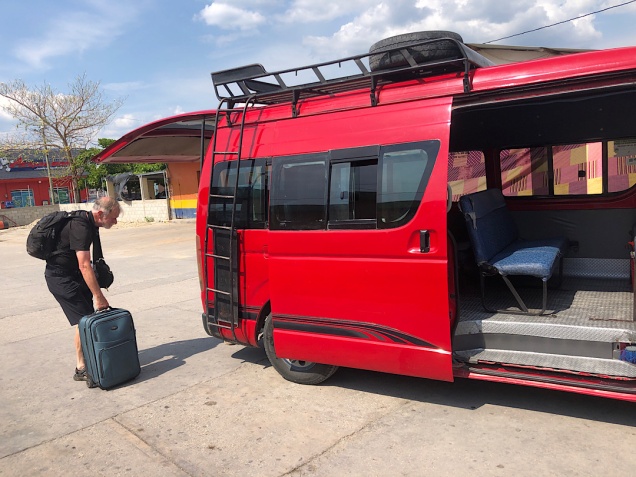 Wilmer had said it would be a “chicken bus,” a Guatemalan institution. I had read that they are colorfully decorated former school buses that acquired new life here. They pick up and drop off passengers along certain routes. But a couple of guys on the van told me that at least in this part of Guatemala, a van could also earn the name just from the fact that stops on demand for passengers.

Whatever you called it, that thing was an oven. By the time we stopped picking up riders, every seat was filled.

No one had to stand, and no one brought their chickens or any other animals on board. We reached Tikal a little after 4, very close to the time it was supposed to get there. We had reconnected with the everyday experience of locals, something both Steve and I cherish. We felt happy.

The next afternoon, after a mind-blowing experience in Tikal, we got a ride in a private car back to the airport In Santa Elena (aka Flores). In advance we had bought tickets on an airline called Transportes Aereos Guatemaltecas — everyone calls it TAG. If the weather had been good, I would have forgotten that leg of our journey instantly. Instead, when the driver dropped us off, storm clouds were gathering. The TAG employee at the check-in desk told us the flight was unfortunately delayed. It might be an hour late. Or maybe later. To pass the time, Steve and I made our way to a nearby snack shop. We each ordered beers and tamales (highly recommended by our driver/guide).. Not long after consuming them, peals of thunder and lightning ushered in a downpour so intense it seemed capable of breaching the roof and flooding all the indoor spaces.

We waited, but no announcements came. Instead the lights went out. Phones and computer screens and blasts of lightning illuminated the faces of the few other sad travelers around us. Thunder made our ears ring. The lights came on eventually, but only for a while. Again we plunged abruptly into darkness. 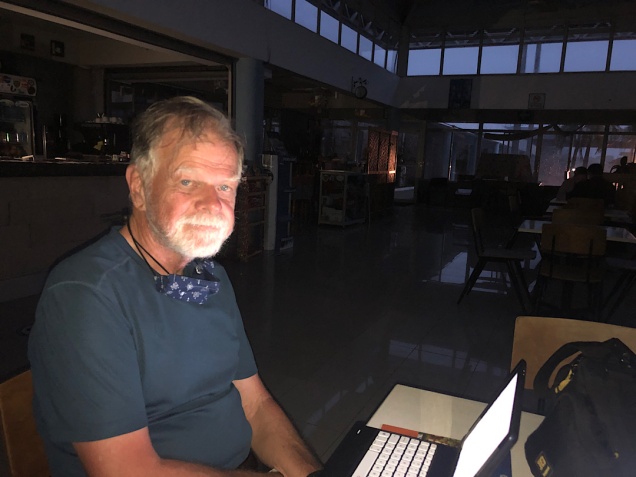 But they came on again, and about 7:45, a propeller plane landed. Lightning was still splintering the sky when about 20 of us climbed aboard. 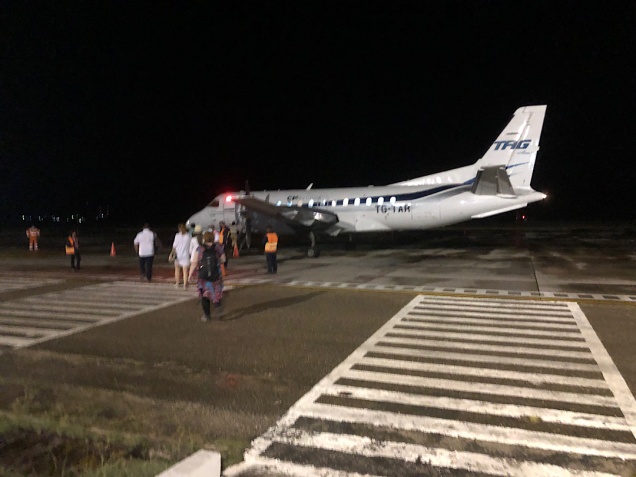 Ironically, the 45-minute flight to Guatemala City was not terribly bumpy. Some rides are worst in anticipation.