Even now, in this time of pandemics and panic, no one checks and stamps passports when you move around between many countries in Europe. In Andorra, Steve and I asked at the tourist office about getting our books stamped, but all the girl at the counter could offer was something that looked designed for children. (We passed.) Luxembourg appeared to be way too cool for faux passport stamps. But Liechtenstein was into it. In the center of Vaduz (the tidy little capital), we saw signs like this. 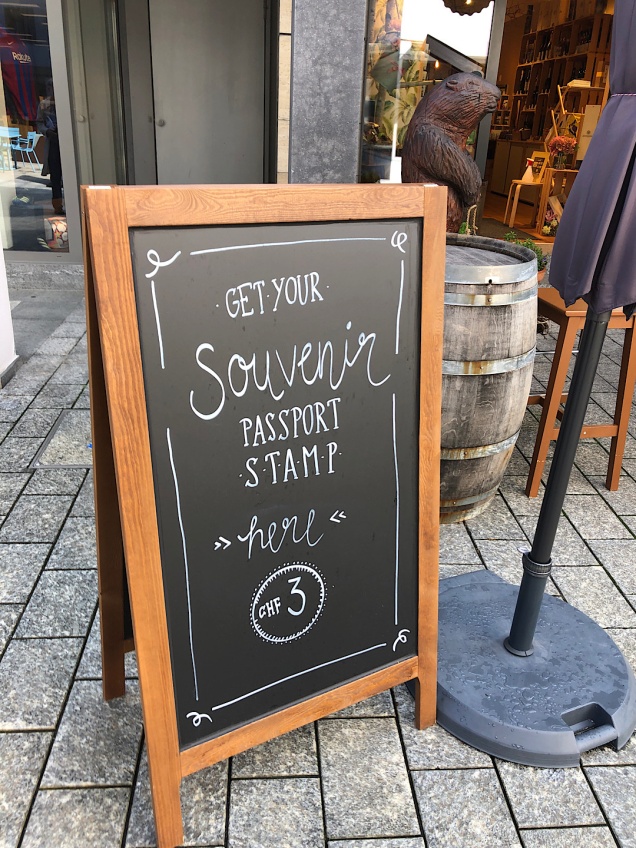 Around mid-afternoon last Thursday (9/20), Steve and I walked to the Liechtenstein Center and paid a few Swiss francs to get a postage stamp and this souvenir: 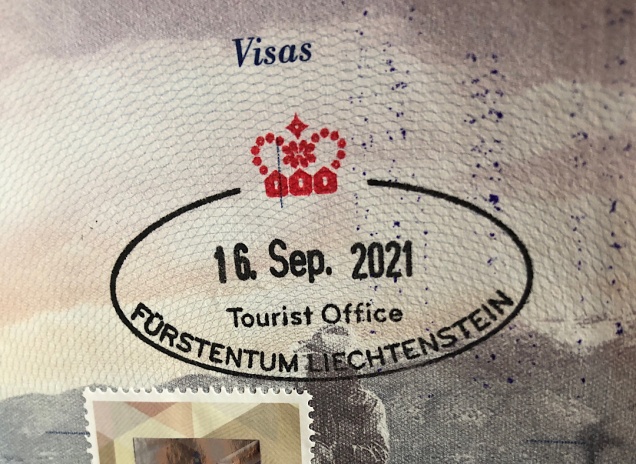 A few minutes later, serious rain finally caught up with us for the first time on this trip. We’d been on the road, moving quite a bit. I was tired, and my umbrella offered only partial protection; my feet got very damp. I felt dispirited. We abandoned any further touristic efforts and retreated to the Airbnb apartment in which we were lodging, not far from the center. 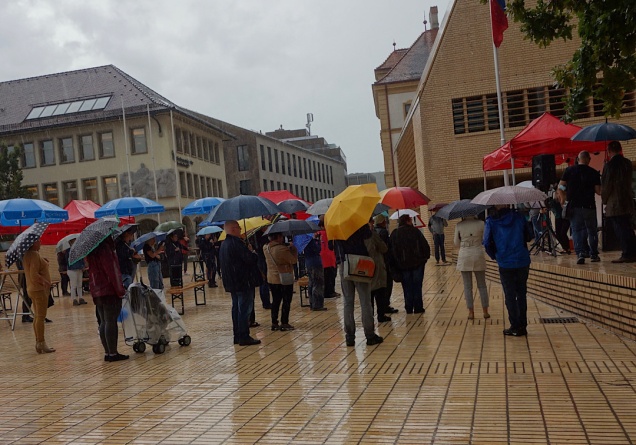 The next day, the world felt renewed: warm and sunny and inviting. Throughout the morning we stockpiled tantalizing glimpses into the strange but pleasant little country that boasts it’s the last remnant in the world of the Holy Roman Empire. It’s also the only country named after the person who bought the place: Prince Johannes Adam I of Liechtenstein (aka Hans the Rich). For centuries, his descendants didn’t actually live in the land bearing their name, but they’re well-entrenched today. The current prince still actively rules the place, and he and his wife, son, daughter-in-law, and four grandkids live in the ostentatious palace that clings to the hillside high above Vaduz.  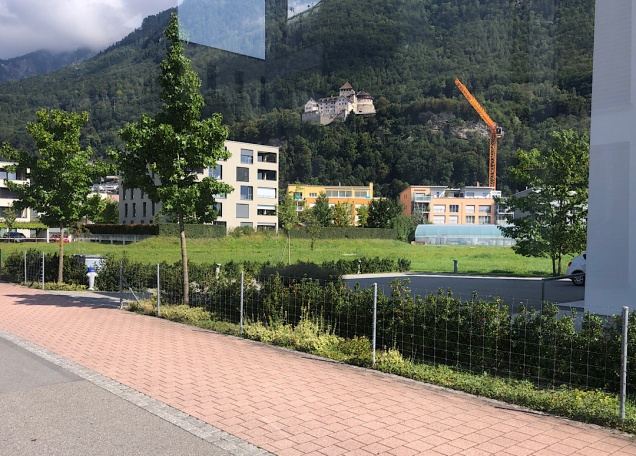 Probably my most enduring memory of my 24 hours in Liechtenstein will be our ride on the little “train” that once a day tootles around the town. 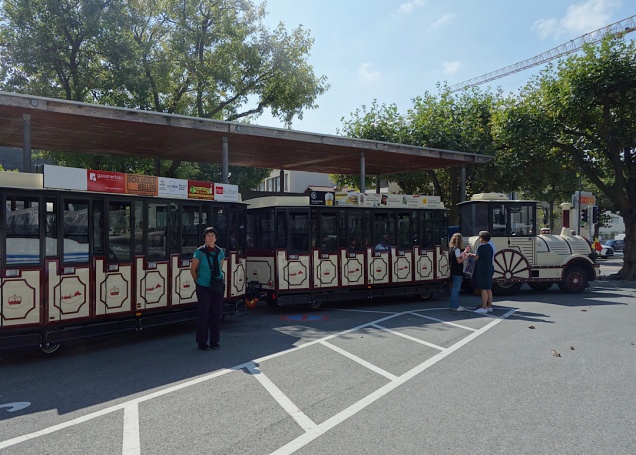 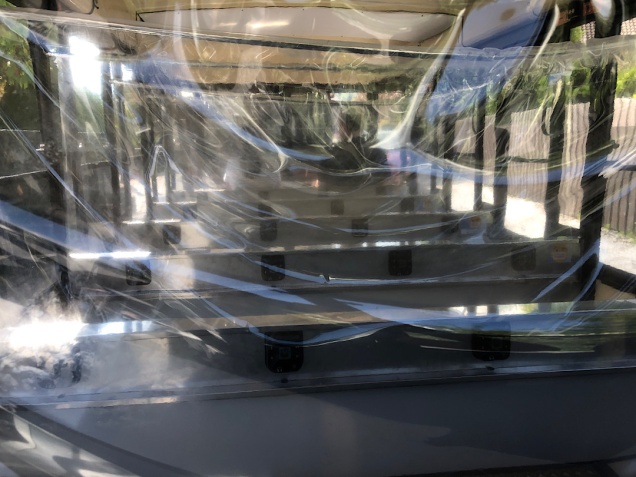 Through earplugs dialed to English, we listened to some minimal commentary and a whole bunch of bouncy Teutonic music. The musical climax was a rousing rendition of the Liechtensteiner Polka. In the city center, we saw vegetable fields and cows munching emerald grass next to the main highway through town. 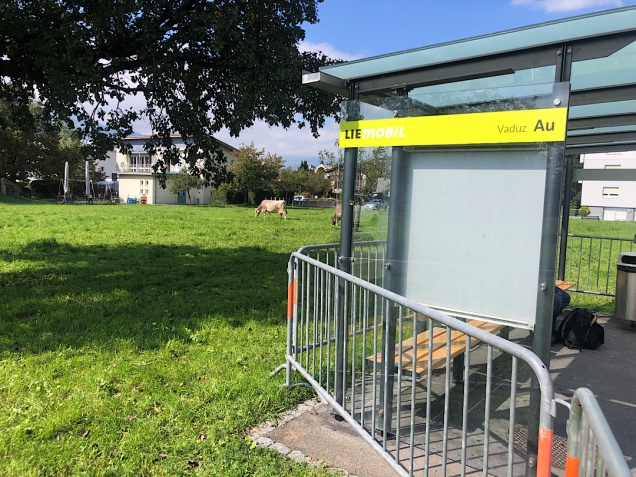 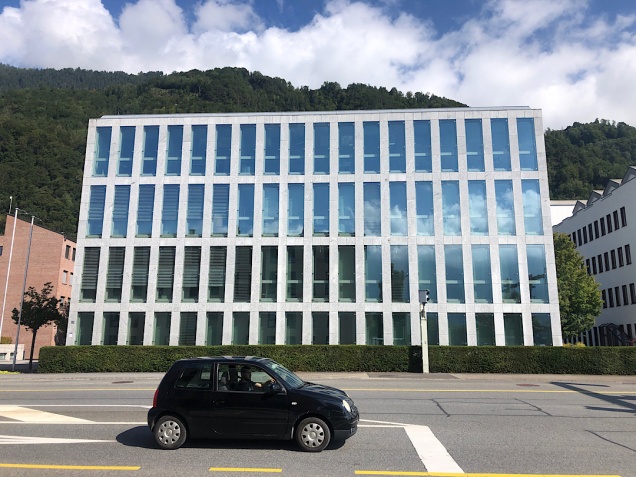 We also noted many massive buildings that we assumed house the countless companies from all over the world that set up headquarters here in order to decrease their tax burden. (While lower than what those companies would pay elsewhere, that tax money is a significant contributor to Liechtenstein’s current wealth.) The soulless structures share the streets with old homes that could have informed Walt Disney’s vision of Euroquaint. 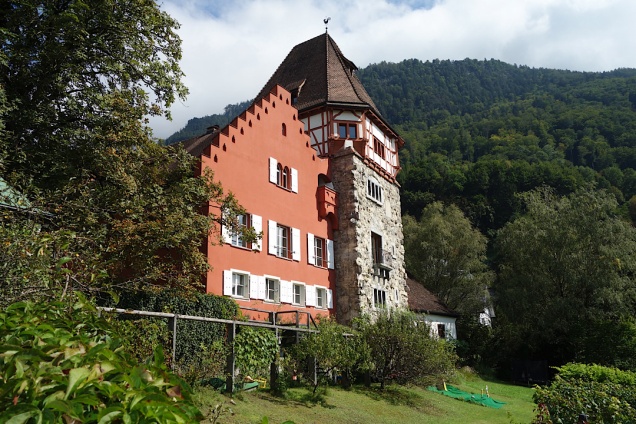 We had to tear ourselves away around 2 p.m. to catch the bus back to Switzerland, and the train to the Swiss town of Chur, starting point for our Saturday morning ride on one of the most famous trains in the world. But I left with my stamps and the lingering refrain of that unforgettable polka. 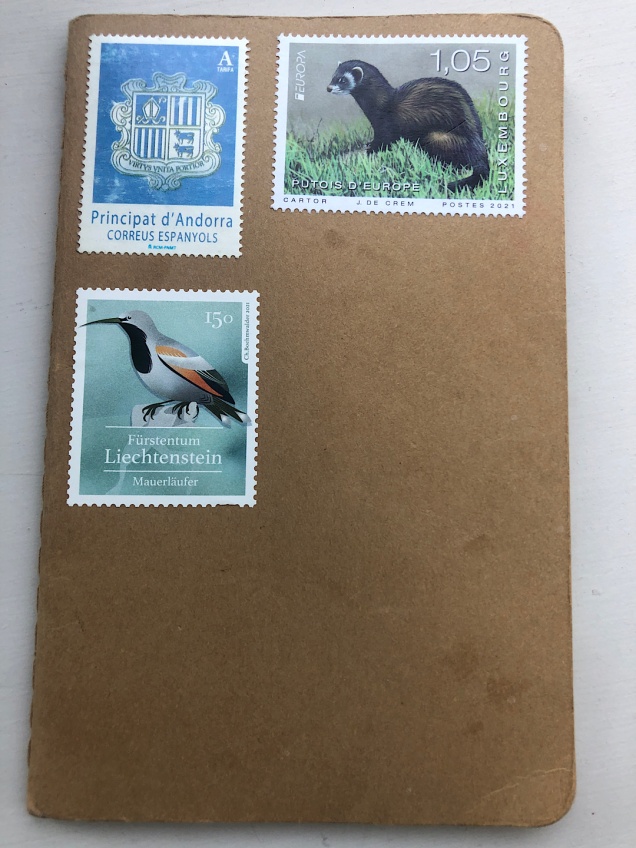 If you’re reading this, it means Steve and I have managed to cross the Atlantic Ocean, enter France, and make our way to the apartment of our friend Olivia in Neuilly, just outside the Paris city limits. We will have begun an adventure I began planning two years ago, inspired by an invitation to the wedding of Olivia’s older daughter, Annabelle. Originally, we expected to fly to Europe in May of 2020, but the Covid lockdowns forced everyone to cancel all their plans. When the wedding was rescheduled and a second wedding (of Annabelle’s sister, Marguerite) was set for May/June 2021, I rebooked everything. But a surge in case levels led the sisters to postpone their celebrations again.

Now we’ve made it into the country and are just four days from the first nuptials, which will take place in Bordeaux. The second event takes place October 9 in the south of France. In between Steve and I have planned a wide-ranging tour through some of the smallest countries on earth: Andorra, Luxembourg, Liechtenstein, San Marino, Vatican City, Malta, and Monaco. 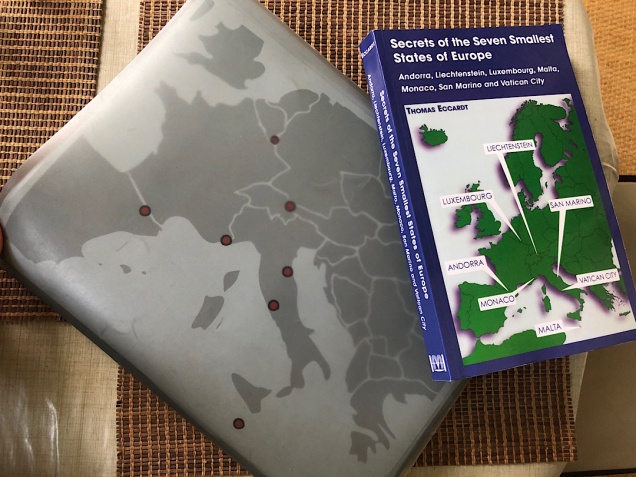 We’ve both been to Vatican City before, and Steve made a lightning visit to Liechtenstein in 1974, but the rest will be new to us. The micro states stand out in other ways beyond their limited size. They rank among the wealthiest countries on Earth, and their citizens live longer than almost anywhere else (because prosperity and physical well-being go hand in hand?) They have oddball forms of government. Three are principalities, one’s a Grand Duchy, Vatican City is a city-state (Malta and San Marino are humdrum republics.)

We have to fly into and out of Malta (an island). But mostly we expect to get around on trains and buses and in a couple of rented cars. We smile at how this trip reminds us of our honeymoon 47 years ago. Then we tore around Europe’s Big Bruisers — France, Germany, Switzerland, Yugoslavia, Greece, Italy. How different will it be to visit the pipsqueaks? We don’t know. But we are optimistic it will be interesting.