Actually, the sight of the Taj Mahal did not disappoint me. Steve and I set the alarm for 5:15 am, threw on some clothes, and slipped out of the Muslim home in which we were staying. We hurried down the dark street outside, where the temperature was almost chilly. Twenty minutes later, we stood at the Western gate of one of the most famous tourist attractions in the world.

Everyone knows what it looks like, right? I’d seen countless photographs. So why is it that walking through the archway into the huge grounds that contain it made my eyes widen; flooded me with a surge of pleasure? The proportions of the lawns, the trees, the walkways, the four minarets, that swollen white dome — the way they relate together —feels so right. The famous white structure is massive, yet the recessed archways and delicate marble latticework that were cut into every side give this great landmark a soul-stirring beauty.

It’s pretty from every angle… 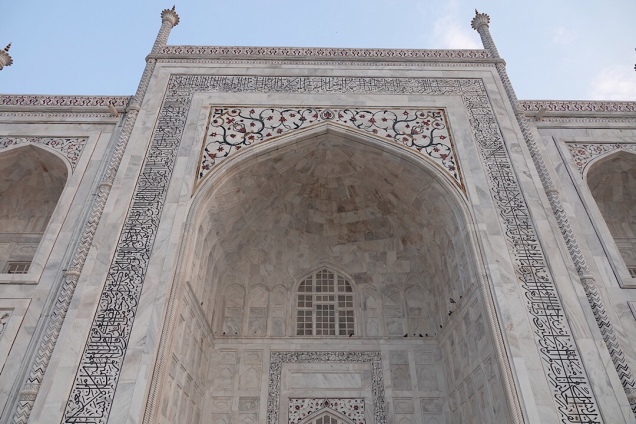 And pretty up close.

I’d had to guess how many selfies are taken there. Weird posing is also super popular.

Steve and I spent close to two hours on the grounds. We went inside the great dome (surprisingly uninteresting.) But I’m not going to write any more about the Taj Mahal. You go there to feel that jolt of moving from second-hand knowledge to direct experience and wonder. There’s no recreating that with words.

Since we only had one full day in Agra, we had girded our loins for Serious Sightseeing. We walked back to our B&B, ate breakfast, then caught a tuk-tuk to the gigantic and famous Agra Fort. It’s very impressive, too, but after another hour or so of poking around in it (and more than 11,000 steps logged on my iPhone), I was flagging. We also needed money. The ATM that was supposed to be steps from the fort was closed, according to a local. So we hired another tuk-tuk to take us near the South Gate of the Taj, where Lonely Planet said we would find several ATM machines. We found: narrow lanes jammed with honking tuk-tuks, taxis, pedicabs, bikes, cows, pedestrians, ladies bearing heavy bundles on their heads. We found one ATM that was padlocked shut, and one that spat out rupees for my card (but not Steve’s.)

I think we started to feel burned out while eating a dismal lunch (our first bad meal in India) at a forlorn rooftop restaurant that Lonely Planet had described as a “friendly, family-run…nice choice” for both western and Indian food. Still we soldiered on, returning to the guesthouse to rest for only about 90 minutes before setting out again in yet another tuk-tuk.

Because we’re running dangerously low on insect repellant, we had asked our host, Faiz, where we might buy some. He said no one in the neighborhood would have it for sale. (This struck us as odd, in a country with so many disease-carrying bugs.) Faiz instead arranged for a tuk-tuk driver to take us to a large medical-supply store some distance away.

I guess I was expecting maybe… a shopping mall? With something like a Rite-Aid? You could call where we went a pharmacy, but one unlike any I ever patronized in my long-ago childhood. It was as big as some Rite-AIDS, and lined with hundreds upon hundreds of labeled bins.

This shows less than half the interior space.

Customers have to stand at a front counter and tell the clerks what they need. The clerk who came to us appeared never to have heard of insect repellant, but a friendly middle-aged Indian man next to me intervened and explained in Hindi what I wanted. The clerk searched and searched and came back with anti-itching cream, which we rejected. He finally found a little stash of three bottles of citronella oil. We bought one for 85 rupees (about $1.20), even though we doubt it will do much to protect us.

I also needed Kleenex. (My runny nose and cough haven’t improved.) But the pharmacy didn’t sell any. Nor did any of the tiny roadside shops our driver stopped at on our way to the “Baby Taj,” another of Agra’s architectural wonders. 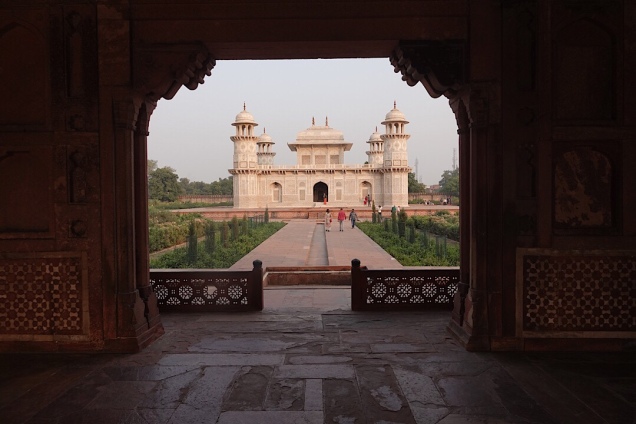 We spent about 40 minutes there and another half hour at the garden across the river from the big Taj. People say it’s lovely to see the light from the setting sun on the monument, but yesterday afternoon the sun sank into smog so thick it blocked all the color.

This was as good as it got.

The driver was supposed to take us back to our guesthouse at this point, but earlier in the day, Steve had managed to make a dinner reservation at the Oberoi Amarvilas. The driver looked surprised when we asked him to take us there. Rooms at this Oberoi (unlike the very reasonably priced Oberoi in Kolkata, where we stayed) run from $900 to more than $1000 a night. We knew dinner would be pricy.

We didn’t care. We yearned for quiet and serenity. To their credit, the staff at the Oberoi didn’t betray any revulsion over how beat up we must have looked. They escorted us through an exquisite garden, through the stunning lobby, to a restaurant where turbaned waiters served us delicious things to drink and eat. We savored every sip, every mouthful.

We also talked at length about whether it was a mistake to stay at Faiz’s guesthouse, which is clean and reasonably comfortable and cost less than half the price (per night) than the dinner we were consuming. But it’s hardly luxurious.

Here’s the street in front of Faiz’s home. The road leading to the Oberoi looks quite different.

I had an insight. When traveling in India, you can cushion yourself from much of what’s been wearing us down. You can hire people to plan your trip and move you around in air-conditioned cars and buses. You can sleep in places that don’t cost as much as this Agra Oberoi but still are much posher than Faiz’s home. Traveling this way costs a lot more in money but less in stress.

Or you can do what we’ve been doing, mixing up the fancy hotels and palaces with mid-range ones and guest houses and B&Bs; riding on the trains and in the tuk-tuks; eating in some of the local joints.This takes a toll on our nerves and sometimes our mood, but it not only costs less. It gives us what feels like a wealth of information about the way contemporary Indians live. We get to see things like that pharmacy; get to shop at the tiny open stands. Steve and I hunger for that kind of knowledge, and we will go home (if we survive) richer in compassion for what ordinary Indians — not just the poor masses but middle-class ones — put up with. We’ll be stuffed with memories of one great conversation after another. And we’ll better appreciate things like Kleenex and Rite-AIDS and Amtrak.

Of course, we still have four weeks of Indian travel ahead of us. Will we hate the place by then? This morning, at least, our glum mood had lifted. We ate a quick breakfast cooked by Faiz’s mother (who lives in the house along with other family members) and bade goodbye to Faiz.

We rode in a beautiful new taxi to the train station, walked in, and learned that our train this morning had been delayed. It probably would arrive at least eight hours late. We called Faiz, who hopped in his own car, drove it to the station, collected us, and helped us arrange a private car and driver.

Once underway, I managed to get on the Indian Railways website (by connecting to my iPhone’s hotspot). 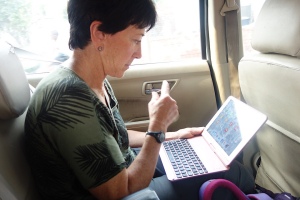 But I got a message saying there’s no refund “if train is running more than 3 hours late or train is canceled.” 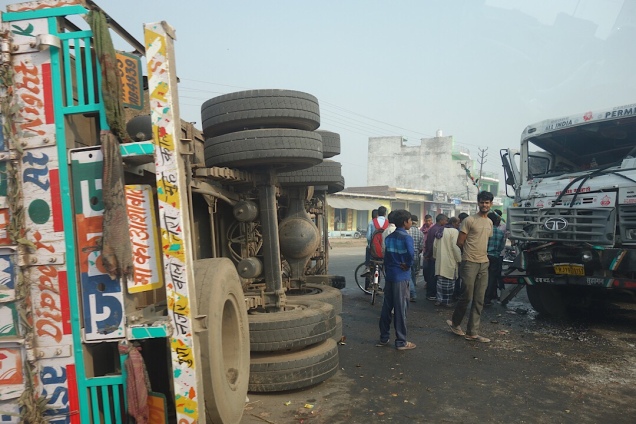 unlike this poor truck that we passed.

I’m posting this now from our hotel, which is wonderfully soothing. Tomorrow at 6:30 am, we’ll set off on another attempt to see some wild Bengal tigers. The guidebook says Ranthambore National Park is the best place in Rajasthan to do that.