In my Travels in San Diego blog, I recently wrote about the list of the Top 100 Public Places in the United States and Canada, noting that San Diego got only one item on the list (#9 — Balboa Park). At the time, I also noticed that Civic Space Park in Phoenix occupied the #34 spot, and I made a note to check it out on my impending first-ever visit to Arizona’s largest city.

How it came to be that I’d lived in Southern California for 38 years without ever doing more than driving through Phoenix (just 6 hours or so from San Diego), I can only explain by saying: other places seemed more interesting. Now that I’ve been here for 72 hours, I can attest: other places ARE more interesting. At least to me. And Civic Space Park is NOT the 34th greatest public place. At least not in my opinion. I drove downtown on Friday morning, which seemed as if it should be as lively a time as any, and I found no more than a handful of folks occupying the large expanses. The suspended netted sculpture is interesting, and some of the seating is pleasant. But I strongly suspect that some official (the architect? the Phoenix park and rec department?) mounted a campaign for votes in order to get this place on the list.

Certainly boosterism in general was very much in evidence. During my 90-minute visit, I counted at least 4-5 orange-shirted “Downtown Phoenix Ambassadors” — paid by someone to function as “roving concierges of Downtown.” One gave me a map and, at my request, plotted out a comprehensive walking tour that led me past compounds belonging to Arizona State University, Phoenix’s “Heritage Square” (with it’s historic buildings, science museum, and history museum), various shopping centers, and Chase Field. 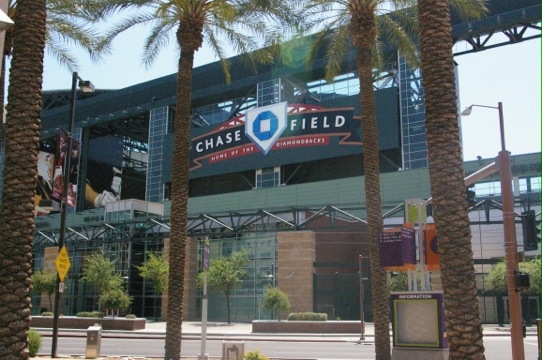 I’m sorry I didn’t visit the history museum; I’d like to understand better how America’s fifth largest city came to be HERE… and so recently. (The downtown felt to me like something conjured up out of the desert within just the past two or three decades.)

Because I wasn’t sure when (or if) I’ll be back, I sightsaw elsewhere diligently too. My take on:

— the Musical Instrument Museum. Impressive on several levels. There’s the building — a massive but elegant monument in stone, housing something like 10,000 instruments from countries all over the world. There’s the technology. Admission comes with a pair of headphones that automatically sense which display (and video screen) you’re standing in front of, enabling you to hear musical selections being played by the instruments in front of you. But I saw few if any overarching stories being told. Instead it felt like walking through an encyclopedia of musical instruments. I was impressed, but pretty quickly overwhelmed.

— the Heard Museum. Celebrating the art and cultures of Native Americans (particularly those who once inhabited the Southwest). The kind of museum that almost makes me wish that I lived in Phoenix (or — more realistically — that the TrueValue Hardware mogul Heards had moved to San Diego and founded their museum there instead of Phoenix.) It seems so filled with stories (the history of bolo ties, the excruciating story of the Indian boarding schools, the true story of Geronimo and the Apaches, etc. etc.) that you could spend hours upon hours absorbing them all (and returning frequently, since most of the exhibits change.)

— Taliesin West. Frank Lloyd Wright’s winter compound from 1937-1959 — conjured up in the desert when he was 70 years old. It’s not pretty in any classical sense. The style felt to me like an oddball blend of Japanese pagoda and LA googie. But I’d love to live in many of the spaces, and the 90-minute highlights tour was crammed with fascinating stories. It all inspired me so much, I want to make pilgrimages to other Wright constructions.

— Cosanti. The home and workshop of Italian visionary architect and artist Paola Soleri (a one-time apprentice at Taliesin West’s architectural school). I didn’t find out what shape Soleri’s in (he’s pushing 93). But he still inspires a legion of devotees. We watched some casting bronze bells (which can be purchased at Cosanti for prices ranging from $30 up to many thousands). And crews are apparently still working on Soleri’s “Arcosanti” project — illustrating his principles of “arcology” blending architecture and ecology — in the desert about 70 miles north of Phoenix. Cosanti’s buildings and landscaping also express Soleri’s vision, and the beauty of it all took my breath away. 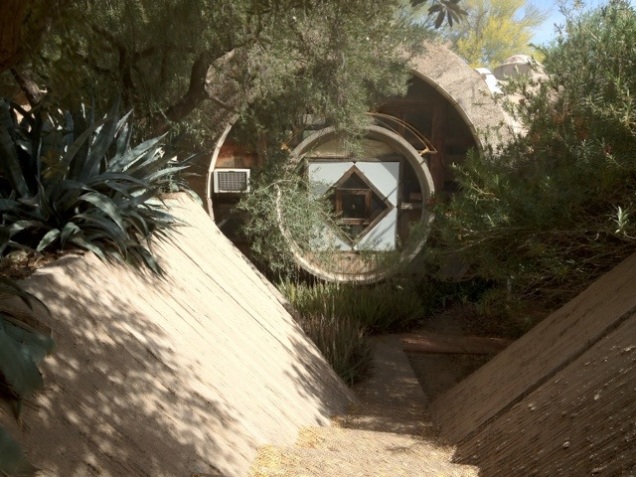 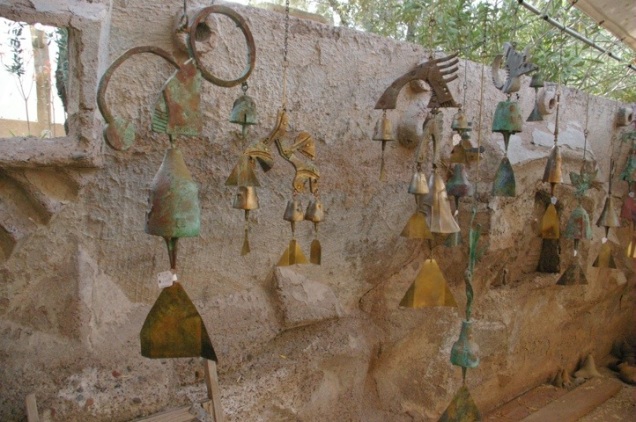 We sadly didn’t make it to Arcosanti. That would be the first thing To Do on my list if I ever return this way, followed (very distantly) by visits to the Desert Botanical Garden, the Arizona Biltmore, the Phoenix Art Museum, that history museum, and a hike on Camelback.

2 thoughts on “How great a space?”