On our last night in Nicaragua, Steve and I sat next to the pool in the house where we were staying. Every few minutes the sky flashed with approaching lightning. The thought struck me, “This is a violent country.” It’s dotted with volcanoes and riven with earthquake faults primed to wreck human infrastructure, like one that in 1972 destroyed 80% of the buildings in Managua, the capital. Hurricanes sometimes batter its Caribbean coast and fierce thunderstorms are a summer commonplace. People have done a lot of bloodletting here, at least since the Spanish arrived 500 years ago. Pirates sacked Nicaragua’s cities. An unhinged American named William Walker invaded and got himself elected president in the 1850s (before going on to die before a Honduran firing squad). A long line of Latin-American dictators followed, until left- wing revolutionaries who called themselves Sandinistas toppled the outrageously corrupt Anastasio Somoza. Their war ended in 1987 but Sandinista leader Daniel Ortega, now almost as rich and corrupt and vicious as Somoza, has positioned his family members to carry on a dark new dynasty.

None of this violence diminished the pleasure of our week in Granada (the oldest city in Latin America, residents boast.) Founded in 1524, its large, leafy central plaza anchors an orderly grid of streets lined with Spanish haciendas painted in hot tropical colors. 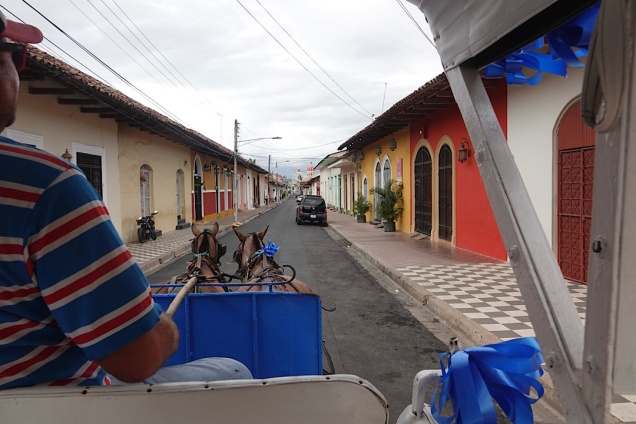 I found a house-trading partner willing to accept guest points from us in exchange for a week’s stay in a building erected about 125 years ago. Its American owners restored it to pristine condition about five years ago. From the street it doesn’t look like much. 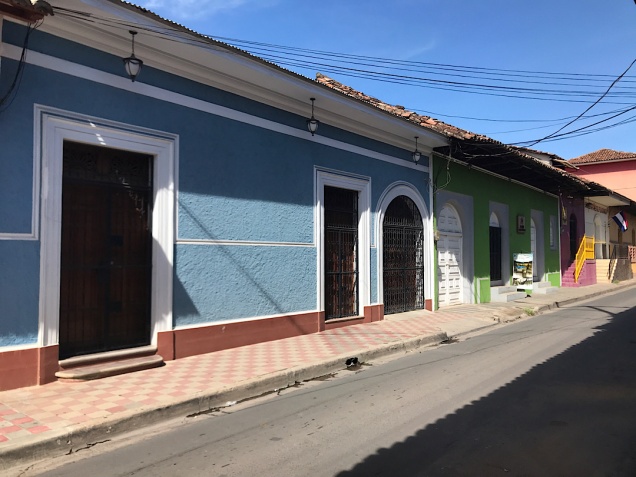 But once beyond the metal gates and heavy wooden doors, we reveled in a 5,200-square-foot patch of paradise, configured around two open-air courtyards. The baronial master bedroom suite opened to them both. At the center of one was a beautiful garden surrounding a fountain… 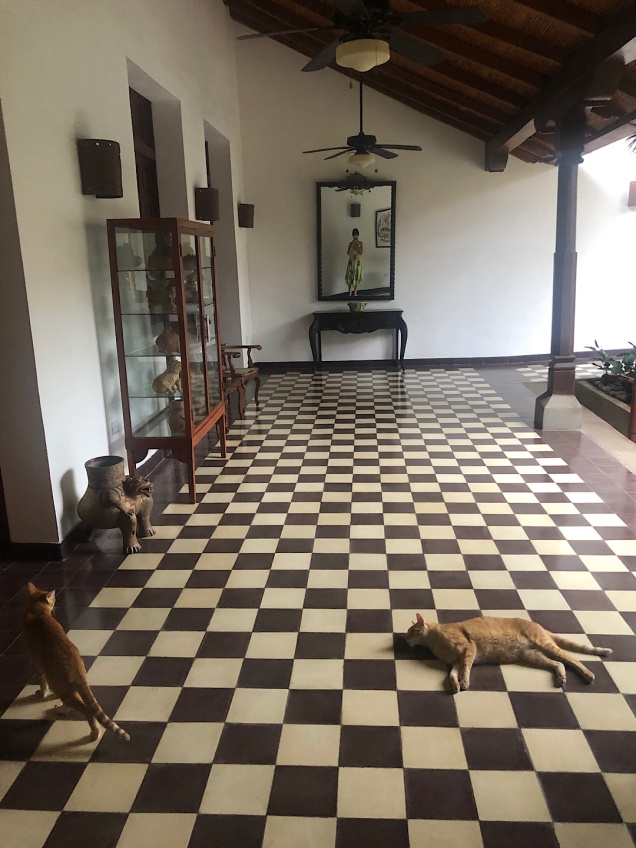 …while the other held the swimming pool and adjoined a spacious kitchen.

When we arrived (Wednesday, June 9), Steve and I felt tempted never to step outside this sanctuary.

We relented, of course, and were rewarded. One day we visited the potters in one of the indigenous villages not far outside of town. They demonstrated every step in the process of kneading local clay…

… dipping it in colored muds that are allowed to dry before being polished and engraved. 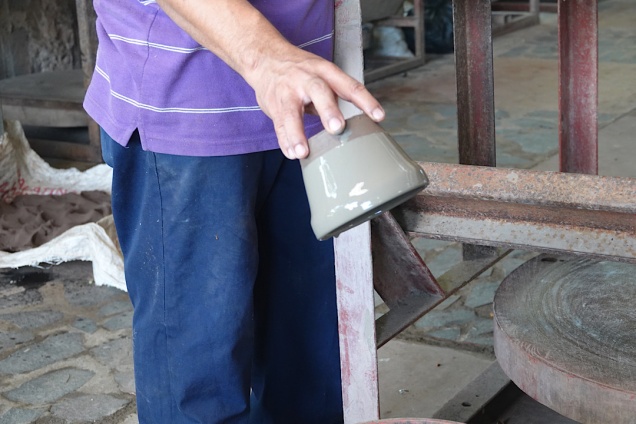 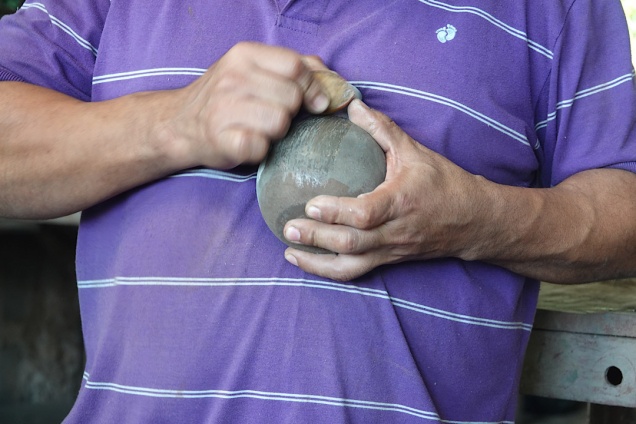 They fire the end products in wood-fueled kilns that they heat to 900 degrees. The results were splendid. 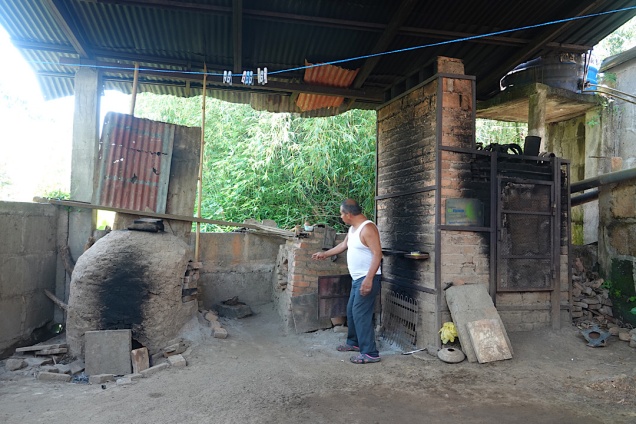 Another morning we hired a motorboat to putter among the little islands sprinkled near Granada on Lake Nicaragua. Nicaraguan millionaires and billionaires as well as ex-pats have built mansions on them, which makes the outing part Lives of the Rich and Famous and part nature documentary.

Sunday afternoon we took a class at Granada’s Chocolate Museum. Cacao trees originated in this part of the world, and today Nicaragua is a major exporter of the beans. I’ve seen the pods before (in Peru and in the Amazon); I’ve sucked the delicious creamy white gel that covers the seeds that grow within the pods. But the class filled in the many steps involved in transforming those bitter seeds into creamy dark deliciousness: fermenting and drying them, then roasting them till they turn dark and aromatic. Steve and I each removed the husks from a dozen or so of them, then pulverized the innards.  You get a buttery chocolate mash when you do this. We mixed ours with honey and other liquids to make yummy chocolate drinks and with additional flavorings (salt! rum! bananas!) to make bars that we ate for dessert for three days.

It was all great fun, but I’m not sure I’ll remember it five years from now. What I doubt I will ever forget is the evening we visited Masaya Volcano. Several volcanos dominate the landscape near Granada. Masaya is the closest. It last erupted hugely in 1772, but it certainly cannot be called dormant today. We hired Carlos Medal, a tour guide and jack of all trades (he works for the couple who own the home we were staying in) to drive us out to the national park in which the volcano is located. We paid a quick visit to the informative little museum…

…then motored up to one of the craters at the top. Steam was rising from a precipice.

We approached and peered in. At first we could detect only a faint glow within the steam…

…but as the sun set, it didn’t take long for the orange-red color to intensify… 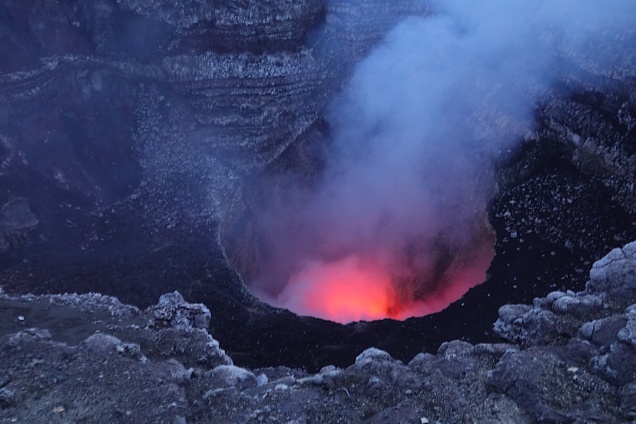 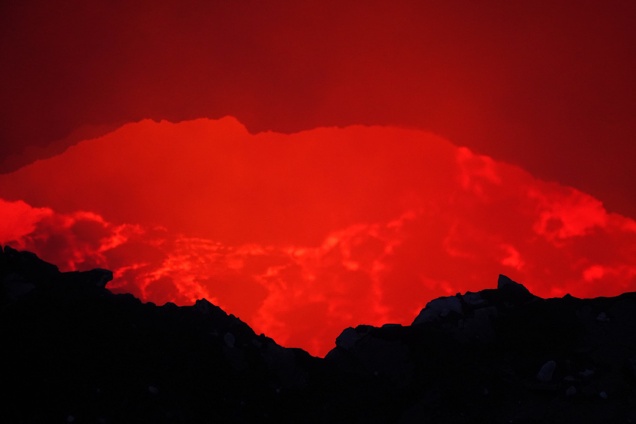 For seconds at a time, the smoke cleared and we could see the magma churning barely 1000 feet below. It felt creepy and thrilling and mind-boggling, like glimpsing the inferno… before driving back to our lovely hacienda 45 minutes away.

It’s tempting for me to see the volcano as metaphorical. Nicaragua is beautiful but it ranks among the poorest countries in the world; some sources place it second-poorest in the Western Hemisphere, after Haiti. The suffering is obvious: shacks in the countryside rival those we’ve seen in Africa. Beggars hold out their hands on every other corner. Men on the street sell single cigarettes all day long, every day. Meanwhile the Ortega family members live better than the Spanish kings and queens of old. They’ve murdered some political rivals; put others under house arrest. 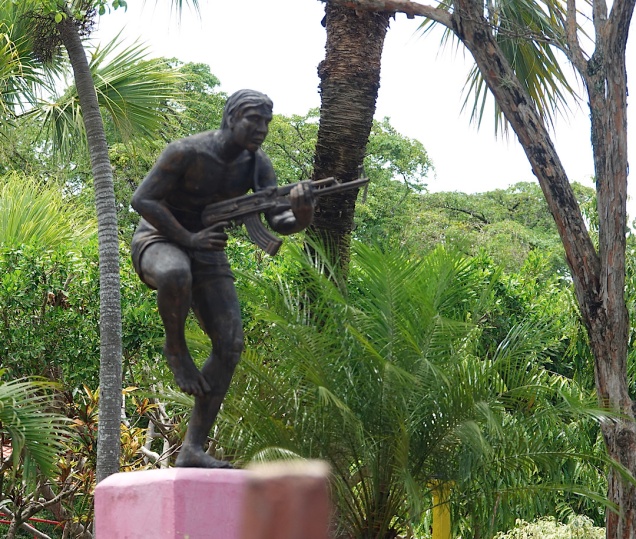 Over the weekend we heard so many loud explosions we wondered if another revolution was starting. We asked what was going on, and people told us the noise is humdrum; that Nicaraguans set off firecrackers to honor saints, celebrate weddings, and otherwise express themselves. On Saturday night, we saw more evidence of auditory extremism when we walked down a pedestrian street filled with open-air diners. For at least a block or two, speakers as big as refrigerators were blasting music at volumes guaranteed to cause hearing loss. Yet the locals were tossing back beers and bouncing kids on their laps and acting like they were surrounded by Muzak.

As I noted sitting next to the pool, it all seems violent — violent in a way that makes the US feel like Switzerland. But what do I know… about thunderstorms or Latin American politics? Not much. The storm we thought was coming that night never materialized. The lightning faded away. I hope sunny days are ahead for Nicaragua. But I wouldn’t bet on it.

2 thoughts on “The storm in Nicaragua”