A little sad that we wouldn’t see Taiwan’s beautiful countryside, I felt intrigued by the recommendation I read from a couple of travel writers. They said a 40-minute metro ride could take one to one of the hot springs towns created by the Japanese during their 50-year occupation of this island last century. The outing sounded almost too good to be true: bucolic, potentially relaxing, and something that could be accomplished in just a few hours. So yesterday morning, off we went.

Using the splendid Taipei metro system, it was cheap (about $1.10 per person) and easy to reach Beitou. But it sure didn’t feel like the ride took us out into the country; the town feels more like a prosperous suburb, albeit one surrounded by not-so-distant lush and rugged and potentially undeveloped mountains. Even though our stop was the end of the line and it was a Tuesday morning in October, the train discharged a bunch of passengers along with us: young couples, families, and older folk. A thick knot of restaurants and shops surrounded the station, but everyone seemed to stream toward a long woodsy park created along both sides of the Beitou Stream, so we went with the flow.

It swept us to the town’s principal sights. These included a beautifully ecosensitive branch of the Taipei city library, designed with a plethora of nooks so tranquil I longed to stay and study something in one of them.

A few minutes further down the path, we found the town’s hot spring museum. It contained a few replicas of soaking pools and a huge tatami-lined hall where the Taiwanese tourists seemed to get a big kick out of sitting on the straw mats and pretending to be Japanese.

The Millenial Hot Springs facility was a bit further down the trail. We’d read that this was the cheap date in town for getting a soak, and since we were more interested in the sociology than the actual hot springs, we paid the 80 Taiwan dollars (about $2.55 US for two) and soldiered in. (We’d brought our bathing suits but not towels, so buying a flimsy one set us back another $1.60)

Inside we changed and eased into the first pool of hot water, which a sign declared to be 38-40 degrees C (100-104 F). It was hot but tolerable, and after a few minutes we moved up to the next dipping station (104-109 F), which we found to be hotter but still bearable. In the final pools at the top, we could only submerge ourselves in the 111-113-degree water for a minute. But we’d seen enough. If we’d come with a bunch of friends, the way the locals did, it would have made sense to move back down to the cooler levels to gossip and absorb more of the supposedly healing minerals. Alternatively, Beitou has plenty of tonier, more expensive spas we could have patronized. But then we would felt obliged to linger. And what we lacked more than anything was time.

Seeing Beitou’s  last two major sights took no more than a half hour.

Then it was time to find lunch and return to central Taipei, where we spent what was left of the afternoon resting and walking more and packing for our morning flight Wednesday.

Now I’m writing this at 35,000 feet, bound for Singapore. I have to add that Taipei’s airport and this EVA Air plane have both shown us some additional sights that made our eyes widen. In the airport, we noted rooms where waiting passengers can go in and shower (they looked similar to private bathrooms). I’ve never seen that before. But the airport is very, very short on the sort of sundries ubiquitous in America airports. I had 140 Taiwanese dollars left (about $3.50US) after we changed money, and though we searched and searched, we almost couldn’t find anything to spend it on. There were mountains of designer purses and French perfume and high-end luggage and other fancy goods, but not a single package of gum or a chocolate bar for sale. Finally, I found a little box of cookies that I’m sure will fill my sugar craving some night.

We passed a “reading lounge” stocked with books, and much weirder, a “Hello Kitty”-themed lounge open to the public. A couple of adult men and women seemed to be hanging out in it, but no kids.

For anyone allergic to Hello Kitty, this flight also would be a trial. The interior of our 777 is soaked with the iconic Japanese brand. 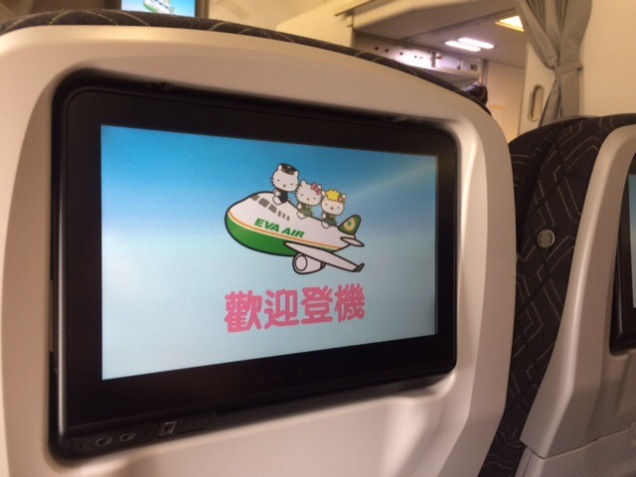 I have no idea why it is nor time to find out. I have to fill out my arrival form for Singapore — while silently giving thanks that I haven’t packed any narcotics for sale on this trip.

5 thoughts on “In hot water”