Late Wednesday afternoon, a few hours after we arrived in Singapore, I was re-reading a long blog post that I had printed out months ago about taking the train from Bangkok to Singapore (a journey that Steve and I will begin, in reverse, on Sunday). In writing about his time in Singapore, the post’s author had mentioned that he’d taken a bike tour of the city — something I had completely forgotten, even though Steve and I had a wonderful experience touring Bogota, Colombia by bike in May. I all but slapped myself on the forehead. We did some quick research; made a quick call. Found that we could join the morning tour the next day.

That’s how we came to be in Singapore’s financial district, wearing bike helmets and ready to set off at 8:30 Thursday morning with Alfian, our 27-year-old bike-tour guide. Our fellow bikers were  a British guy of Indian descent named Joe, and a Norwegian woman traveling with her 12-year-old daughter. Alfian had given us our orientation lecture, and we were ready to roll out the door, when the skies opened up, unloosing a drenching downpour. 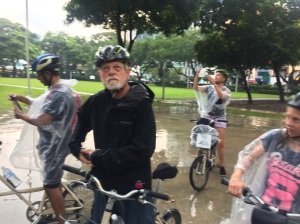 Alfian seemed only a little dismayed. He predicted it wouldn’t last long and advised us to get a coffee at the nearby Starbucks.  We did, but by 9, it was not only still raining, but crackling with lightning and explosions of thunder. Alfian made a phone call to someone and pronounced that the rain was actually only gentle. He suggested that we carry on, and everyone in the group agreed. So off we pedaled into the thunderstorm.

He was right. The downpour and pyrotechnics didn’t last much longer, and the part we experienced felt emblematic of this place overall — dramatic and beautiful and refreshing and actually quite safe. For the vast majority of our three-plus hours with Alfian, we pedaled on level sidewalks or bike paths. None of it was in scary, chaotic traffic. My sleeveless arms were damp, and the breeze generated by the biking cooled me; it was a little like generating our own air conditioning. Best of all, biking and chatting and stopping for photos was a perfect way to see some of Singapore’s many marvels.

I’m embarrassed to admit how little I knew about the place before coming here. But we’ve made up a lot of ground in the last 24 hours. I now understand how this little island at the tip of the Malay peninsula came to be an independent country (no doubt about that!) in 1965, and I’ve gotten a little insight into how the humble one-time fishing village (symbolized by the mermaid) has become transformed into the economic lion it is today — one of the wealthiest and most productive societies in the world. The bike tour yesterday made it crystal clear that the city center is a physically astounding place. Parts of it retain the grandiose classical and Victorian edifices built by the one-time British rulers. The humble but colorful vernacular architecture of their one-time inhabitants (Chinese, Malay, Indian) has been preserved in a couple of enclaves.

Elsewhere the Singaporeans have constructed some of the most incredible looking high rises I’ve seen anywhere. They rival (or surpass) the wonders of today’s Shanghai skyline. 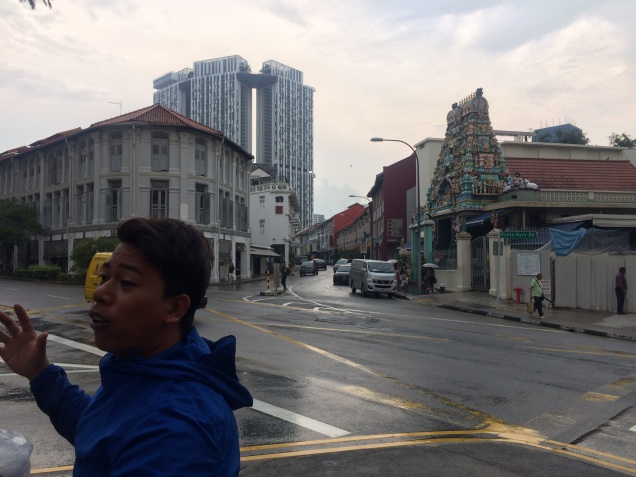 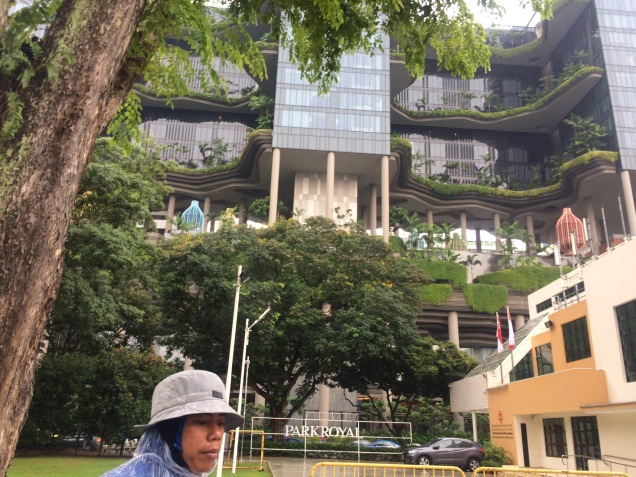 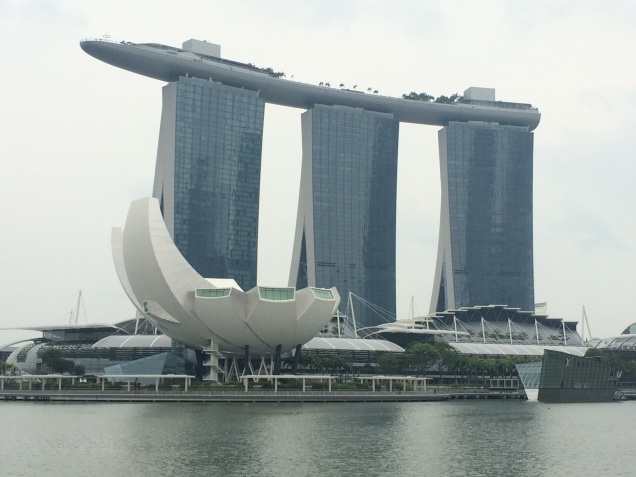 The population is multinational — though 74% are ethnic Chinese (many of whose antecedents poured in here in the early 1800s, when Singapore first began thriving as a free port. But about 12% are ethnic Malay, and a similar number are Indian. (Everyone else makes up the other 2%). What charms and delights me is that although the city-state looks and feels intensely Asian, for the most part, people are speaking English (or Singlish, as the weirdly inflected local tongue has been nicknamed). All children study it in school (along with their “native” ethnic language). You can walk anywhere, day or night, and be safe; talk to everyone, and be understood.

Thursday afternoon we spent an hour at the National Museum. Friday we covered a lot more ground; took the metro and a city bus out to the city’s zoological complex in the rainforest. Although the zoo here is reputed to be one of the world’s best, we figured didn’t have the time to do it justice. But Steve and I are total suckers for rivers, and we couldn’t resist a quick visit to the adjoining “River Safari” park devoted to showcasing 8 of the greatest rivers in the world (the Mississippi, Nile, Congo, Mekong, Yangste, Amazon, Ganges, and Mary).

Then we metro’d to the Orchard Street, Singapore’s over-the-top concentration of insanely expensive designer shopping palaces.

Along the way we have been amused by a few reminders that the infamous Singaporean social control still persists. There was that notice about executing drug dealers (on the immigration form). And Alfian told us they still cane rapists and other criminals here.  I haven’t seen any warnings about chewing gum (though they probably don’t sell it in the stores), but I did gasp at the cigarette packages.

This is a food-obsessed society, but vendors no longer can sell their wares on the street, where it’s too hard to police their sanitary standards. Instead they’ve been moved into wondrous indoor facilities. But that’s the subject of another post. For now, we only have one day left to begin absorb what would probably take a month – or a year to begin to understand.