I didn’t expect to fall in love with any place that instantly conjures up images of drug-fueled violence. I’ve liked most of the South American cities I’ve visited: Buenos Aires, Cartagena, Montevideo, Arequipa, Bogota, Cuzco — even dreary Lima had its charms. But I’ve never fantasized about moving to any of them, as I did in Medellin. That’s my test of when a place has really hooked me.

Let me count some of the hooks.

First, the setting is strikingly beautiful. Medellin developed along the banks of a river that rushes through a valley.  Lushly forested mountains rise almost 4000 feet above the valley floor. Although poor settlements have crept up some of the vertiginous hillsides, they look like glittering tapestries embroidered on the green fabric, rather than blight. Frequent rain washes the air clean, but we had at least partial sun and temperatures in the 70s and low 80s every day of our stay. Medelliners boast that they live in the City of Eternal Spring.

The energy of the Paisas (as the folks in this region are known) is palpable. Streets and plazas crackle with all manner of activity. At times I mused that it reminded me of New York. But New Yorkers are tenser, more harried. The folks in Medellin have a relaxed sensuality, expressed in part in the way women dress — Haute Slut, Steve and I came to think of it. Females from 14 to 70-plus pour themselves into skin-tight jeans, often shredded strategically to reveal more skin. They wear lots of jewelry and carry flashy purses. Necklines plunge to show off cleavage that’s often enhanced with silicone. (Plastic surgeons thrive here.)


The men clearly are appreciative. We enjoyed the interplay that developed between our walking-tour participants and some local lime-juice vendors. The juice salesmen flirted, cajoled, implored us to buy some of their tasty drinks. They sold some to a couple of the pretty European young women on the tour. Finally, they peeled off, with one of the guys calling out, “Adios mi amor!”

“Which one are you talking to?” our guide shouted after him.

“She knows,” the juice-vendor shot back, slyly.

The prostitution is legal, according to our guide.  In contrast, violent crime seems to have disappeared from large parts of the cityscape. Pockets still exist where muggers roam, and you wouldn’t want to venture there at night. But we felt safe catching taxis in the street and walking in a wide variety of neighborhoods. In a broad sense, Medellin feels like a city that has come back from the dead.

Back in the late 80s and early 90s, it was THE most dangerous city on the planet. Hernan, our marvelous walking tour guide, said it was even more dangerous than Beirut, then in the grip of a civil war. Medellin’s besieged inhabitants were dealing with the consequences of many internal struggles. It was a city of not just muggers and pickpockets but one where men threw grenades and set off bombs in public spaces; where warring drug lords launched the most bloodthirsty attacks against their rivals and their rivals’ allies. The 50-year-old political and military war between Colombia’s Communist revolutionaries and their fascistic counterparts on the right added poisonous fuel to the fires.


Today residents boast that the city ranks among the safest in South America. Multiple factors have contributed to this, and I won’t even try to explain them. (I understand them better now but still by no means completely.) One is that a heavy-handed strong man (former president Alvaro Uribe) worked hard in the early 2000s to establish what he called a “security platform.” Lots of rights got trampled on during that process, but the overt violence was quelled. At the same time, access to education was expanded dramatically. Six years ago, the government opened negotiations with the left-wing rebels who have fomented so much shocking violence and kidnappings over the years. Hernan, the guide, said another important component was the Medellin government’s embrace of something locals refer to as “democratic architecture.”

What that jargon translates to is investing tax dollars to transform decaying, crime-ridden sites into spaces that foster community. We visited two of the most prominent examples of this, and both dazzled me.

In a couple of neighborhoods, the city has built a cable-car system to carry folks up the tortuous grade. So mostly it’s middle-class and poor folks whose lives have been significantly improved. Still, for tourists like us, it provides a fascinating aerial view of all the life unfolding below: dogs barking on balconies, orange-suited workers sweeping the streets, children walking next to their mothers.

The cable car line we took up (free to Metro riders) connects with a second cable route  that continued on past the barrios to skim us for five minutes? ten? over wild forest, finally terminating at a huge nature preserve and park.
Yesterday, after Mike and Stephanie departed for their trip home, Steve and I took the metro to another neighborhood to see the series of six escalators that have been built there. They too are free to ride, and they make it easier to survive in this densely vertical community where there are no roads for cars. Along with fantastic murals, large signs have been posted thanking visitors for coming. I lost count of the number of locals who greeted us with warmth and obvious pride. 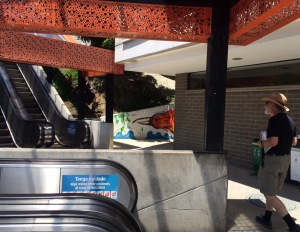 On Medellin’s metro, which we rode many times, I saw other evidence of bountiful courtesy. The system is not very extensive. It runs on elevated track, and mainly along the riverbed, but we learned that it was easy to connect from it to inexpensive (and ubiquitous) taxis.

Metro rides only cost about 75 cents, and the cars come along often. Although the system is now 20 years old, no part of it has been defaced or graffitied; everything looks spotless and gleaming. Several times I witnessed young men or women rise to offer their seats to mothers carrying small children, or once, to an elderly nun.

Hernan said this is because the metro was built during the city’s darkest days, when Medellin was a hellish place. The creation of the metro  gave people hope. It helped carry Medellin’s residents into a time of rebirth. That’s why they’re proud of it; why they cherish it.