Remind me never to say that any bus is the nicest bus I’ve ever been on — not until it reaches its destination. I wrote and posted those words yesterday an hour or so before our “Emperor Elite” double-decker ground to a halt on a remote country road somewhere between Pereira and Medellin. We waited, engine running, for five minutes…ten…fifteen… When the bus steward finally made a pass through our section, I asked him what was the problem. He replied that there were many, many protesters in the road. We had to be patient, he said, but he seemed to reassure me that we would be moving again soon.

Indeed we did, and in a minute or two we were passing not protesters but evidence of an obviously recent landslide that had reduced traffic on the road to a single lane. Another 5-10 kilometers down the road, we did crawl by hundreds of campesinos clogging the road. Some were carrying signs, but Steve and I were neither fast enough to read nor photograph them. Steve did capture an image of the throng:

Past the demonstration,We barreled along again.  I’m not sure how long it was before the real trouble began. The bus stopped, and this time, the engine went silent. We sat and sat. The temperature began to climb, even in our lower-level first-class compartment.

The steward finally opened the door to the outside world, and as soon as one or two of the other passengers disembarked, I followed them. My experiences in other places around the world have taught me that when your bus breaks down and the locals start disembarking, it’s wise to join them, the better to sniff out what’s going on.


After a long time, another (single-decker) Occidental bus to Medellin pulled up, and there seemed to be general agreement that the folks with babies and children should have first priority to get on it. After them, other passengers engaged in a Darwinian struggle to get their suitcases off the disabled bus and onto the rescue bus. 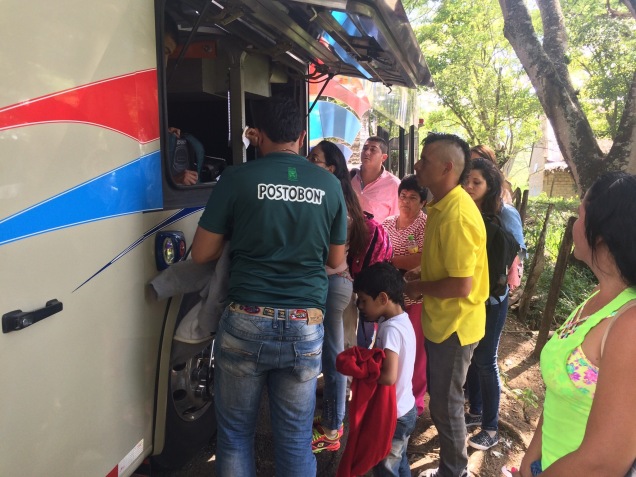 Sadly, Steve and I were not among the fittest at this enterprise. But we soon chatted up a savvy French-Canadian, now resident in Colombia, who seemed to know the score. The driver, he told us, had become alarmed at the way the transmission was sounding and decided it was unsafe to continue on. A replacement bus was being sent from a town only 20 minutes away, so everyone should be on their way again soon.

That’s more or less what happened. The rescue bus arrived, we all transferred our luggage, and we continued northward.

The rest our journey to Medellin still required patience. We were traveling on the two-lane country roads because the main ones are apparently under construction and fraught with delays. However, you do it, the journey twists through vertiginous country the likes of which I have only seen in the Himalayas. It was breathtaking but stunningly slow. (One of the features of the rescue bus was an electronic display of our speed that was so depressingly slow I could barely stand to look at it.)

We finally pulled into the southern bus terminal in Medellin at 6:30 pm, a full three hours after we were supposed to arrive.  Getting a taxi was another trial. The vast majority of the taxis in Medellin are too small to accommodate the four of us and our (modest) suitcases. There was no orderly line-up to wait for the rare larger vehicles. Still, 20 minutes or so fanned our latent aggressiveness sufficiently that we managed to snag one. We arrived at our hotel tense, tired, and hungry.

But I can tell you this: everything that’s happened since then has convinced me it was worth it to come here. Medellin has enchanted me. It may take me a few days to find the time to explain why. But if you’re patient, that ride will come along.