Since our arrival in Cartagena Thursday night, I haven’t actually seen any big groups of gringos who looked like they arrived on a cruise ship. But I know they do come here, and I imagine when they arrive, they’re loaded on a bus at the cruise-ship terminal, then driven to the city’s Old Town, where they’re led around to engage in shopping and some sightseeing. Certainly everyone must enjoy that. The ancient, walled city here is a World Heritage Site, and deservedly so.

For the first of our two full days in Cartagena, however, we engaged in a couple of Latin American diversions. One was an outing to the mud volcano of El Totumo. Truth be told, I had heard about this activity from our (norteamericano) friend Howard Zatkin, who ranks among the world’s most intrepid travelers. Howard traveled around Colombia last year with an adventure-travel group that mainly caters to young Europeans. During their visit to Cartagena, Howard signed up for an excursion, seemed to greatly enjoy it, and recommended that we do it too. You can also find it listed on the TripAdvisor app, where you can buy tickets for an excursion priced at $93 a person. We instead, upon arrival, simply asked the receptionist at our boutique hotel, the Zana, if we could make a reservation with a group for the next day (Friday). She made a call and said we could get the guided excursion (including lunch) for 60,000 pesos a person (about $20 each).

An aging mini-bus picked us up promptly at 8:30 the next morning and spent a good hour driving around and collecting other customers: Mexicans, Bolivians, Peruvians, Brazilians, and Colombians. Except for two adventurous girls from Savannah, Georgia and a tubercular looking German, Steve, Mike, Stephanie and I were the only Anglos on board.  Finally, we all loaded onto a full-size bus and trundled north along the swampy coastline, past mangroves and rugged hills. After more than another hour, we finally arrived at the star attraction: a 50-foot mound that looks like a miniature volcano but contains liquid mud rather than lava.

Part of what was fascinating about this experience was how impromptu its organization felt. No one told us what to bring (or not bring), so Steve and I packed our bathing suits (while M & S wore theirs under their clothes — the smarter choice). We borrowed a couple of towels from our hotel, but had no idea what we actually would do at the volcano site — where we disembarked to find a chaotic scene packed with what felt like was a thousand rambunctious Colombian school kids. Still, our calm and happy guide, Eliana, somehow managed to direct all 25 of the folks in our group. You gave her your towels to guard, gave your phone or camera to a guy with a fanny pack (Enrique), chucked your shoes in a pile at the base of a steep wooden staircase, and then climbed up it. 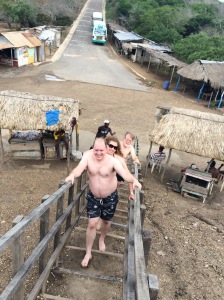 At the top, the full scope of the weirdness of this experience became clear. The pool of mud was only maybe 15-feet square, so a limited number of folks could enter it at any given moment. Once inside, a crew of 5 or 6 men worked helping each tourist down the ladder into the pool, guiding them into a prone position, and vigorously massaging their legs and arms and neck and back. Eliana had told us all that the mud had medicinal and aesthetic properties that would enable us to return home healthier and more beautiful.

I felt dubious, but the idea of turning back at this point seemed unthinkable. Mike descended first, foll0wed by Stephanie. 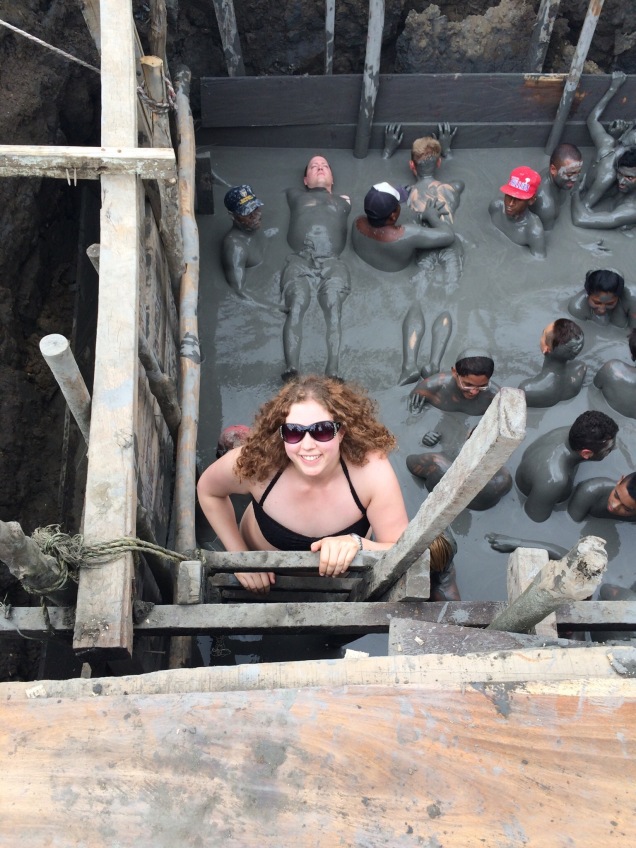 I went third. It felt like stepping into melted chocolate, except that it was only lukewarm and smelled vaguely sulfurous, rather than chocolatey and delicious. Although the massaging had looked vaguely pervy at a distance, by the time I was floating, I had lost all sense of normalcy and just yielded to the man-handling (which never actually felt inoffensive.)

After a minute or two, my massager launched me off like some kayak. I struggled to right myself. The mud is even more weirdly buoyant than the Dead Sea (which Steve and I floated in last year). I learned that it worked best to hold my legs rigidly straight. Then I could just kind of bob there, upright. Any move toward a fetal position was disastrous, though, making you unstable — in a place where any splashing was downright anti-social.

Steve climbed out almost immediately, but Mike, Stephanie, and I hung out for a few minutes before asscending the decrepit and slippery exit ladder.

That was scary, but only a fraction as terrifying as the main ladder leading down to the ground below. Its every tread was as slippery as if greased; even the railings had treacherous patches. Somehow, I muscled my way down (trying not to think about Michael and Stephanie in my wake but reflecting that if OSHA ever learned about this place, it would probably order the US military to invade and put an immediate stop to it.)

At the bottom, I followed more instructions and made my way down a pathway to some distant tubs and ladies. This turned out to be the only “shower” in the place. Grim indigenous women poured cupful after cupful of dirty looking water over every mud adventurer, roughly rubbing and tugging the bathing suits and body parts. Amazingly, it seemed to get us more or less clean — or clean enough to pack up and climb on the bus again.

The rest of the afternoon was far less interesting. We drove for about an hour, then stopped for a mediocre lunch at a low-rent private beach. That was bad enough, but then Eliana announced that everyone would have an hour to “disfrutar” (“enjoy”) the beach. Steve and I tried to go for a stroll on it, but a life-guardish fellow stopped us and told us it would be dangerous to continue on. He said we could walk for a bit in the other direction. But soon he was chasing after us again and ordering us to return to the group.


We finally got back to the hotel and had real showers that yielded amazing amounts of additional mud. Later last night we soaked up some of the street life exploding because of the opening game of the America Cup soccer games, in which Colombia was playing the US. The sounds of vuvuzuelas and honking cars and chanting fans filled the air, and we walked for a while trying to find a good place to watch the game. We wound up in a quiet bar, stayed for an hour or so in which the American defeat came to look inevitable. Then Steve and I headed for bed, exhausted by all the native action.