Besides Bogota and Cartagena, the village of Villa de Leyva invariably ends up on short lists of places to which first-time visitors to Colombia should head. Founded by the Spaniards not long after they took over the place in the 1500s, the town boomed for more than a century because wheat grew so well in its environs. But monoculture eventually destroyed the soil, and almost everyone left; what remained of life in the village was frozen in time. By 1950, only 3000 or so farmers inhabited the town. Then in a happy twist of fate, a Colombian president (who owned land locally) declared it a cultural heritage site. Since then increasing numbers of tourists, expats, and wealthy Colombians seeking vacation homes have flocked here to soak up the colonial color.

It seemed to me that we should follow in their footsteps. But how? It is possible to board an intercity bus in Bogota and take it to Villa de Leyva, but there are sights worth visiting along the way. Instead we splurged and hired a driver to transport us Tuesday morning. The good news was that our driver, Paulina, was careful and never once scared me. On the downside, our Chevrolet was muy compacto. Although our carry-ones fit in the trunk, cramming three of us in the back seat took family togetherness to a whole new level. Because it was my birthday, my fellow travelers kindly ceded me the one commodious (front) seat for most of the ride. 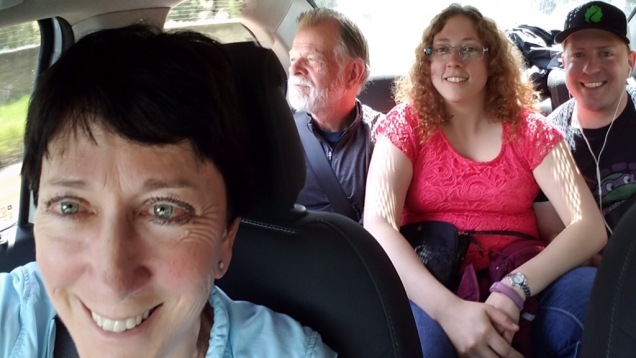 I had figured that if we left Bogota at 9 a.m we might reach Villa de Leyva by 3 p.m and still have time to do a 2.5-hour hike. This proved to be a pipe dream. We got to the principal sight en route — the “Salt Cathedral” of Zipaquira — around 10:20 but had to wait for the start of the English-language tour, which wound up taking a full hour and a half. The cathedral’s pretty interesting. About 25 years ago, local miners carved huge stations of the cross and a full church into the gloomy tunnels and caverns of the salt mine. People claim it’s now the third largest such work in the world (albeit dwarfed by two colossal ones in Poland.)  Steve and I were particularly charmed to learn that the church and the admission fees collected belong to the town (rather than the federal government which owns all mineral rights to the salt). Since it opened, it has grown into a huge tourist attraction, that now generates some $5 million a year. Profits are reportedly being used for schools, hospitals, and other local bounty. The miners never expected their artistic impulse and religious devotion to have any material consequences, but sometimes miracles do happen.

What with visiting the salt works and making another stop for lunch and being blocked repeatedly by road construction, it was past 5 p.m by the time we reached our hostel in Villa de Leyva. And then we spent a bunch more time deciding what to do the next day and booking a tour and figuring out where to eat dinner (many places were closed) and waiting for a taxi to arrive and take us to one that was still open. It was raining and chilly and once at the restaurant, we learned it was basically a sandwich shop, and the only tables available were outside (though, happily, protected by umbrellas big enough to block the drizzle).

Such are the times that can try travelers’ souls. But once again, good luck was with us. It soon became clear that the reason this restaurant is so highly rated online is because the cook and owner are artists. Their canapés and smoked meats and soups were the stuff of culinary headlines. They adorned my tomato soup with birthday wishes and presented me with a piece of delicious cake. By the time we’d consumed it (and finished up a third bottle of the good Chilean Cabernet), we had invited Eduardo and Pilar to visit us any time in San Diego. And I was counting the day among my most memorable birthdays.

Our one full day in Villa de Leyva (yesterday) dawned warm and sunny, and the 5-hour private tour we’d booked while tired and tense turned out to be excellent. Our guide took us to an impressive fossil museum… 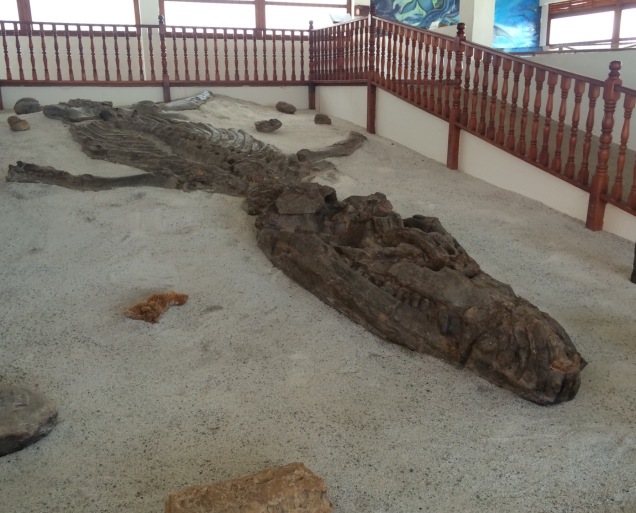 …and then a vineyard.

Our guide, Angela, also did a terrific job of filling us in on current life in the town, which she insisted has the best weather in the world. “Es un paraiso,” she declared. (It’s a paradise.)

After the tour, we had time to stroll around the time-frozen center of town, and later, to consume another very good meal. It seemed easy to understand what pulls people here.

And yet we’re moving on. I’m writing this post on our ride to the Bogota Airport, where we’ll catch our flight to steamy Cartagena. I’m hoping to upload it there, or failing that, at our next hotel.