We found the town of Gibraltar to be a bit wierd (those phone booths!) and a bit boring.

Saturday night we had our only bad meal of the trip: overpriced, mediocre food for which we had to wait more than two hours because the assistant chef(s) didn't show up for work. From time to time, when the doors to the kitchen opened, we heard the remaining chef hurling curses in Spanish. When the doors were closed, we had to listen to a wannabe Bobby Darin on the sound system singing “My Way” and one other song. The two-song tape looped over and over again. I stopped counting the 10th time it played.

But the rock of Gibraltar delighted us. Early Sunday, we took the cable car up to the summit:

…then spent the next few hours meandering down the paths leading back to sea level. The whole upper rock is a nature preserve, dense with splendid vegetation, outrageous geological formations,

and troupes of Barbary apes.

Unlike the ones we saw in the Moroccan cedar forests, these were acclimated to tourists. (Somebody obviously has been ignoring those threats of 4,000-pound fines (!) for feeding them).

We saw more tankers than we've seen anywhere else in the world. 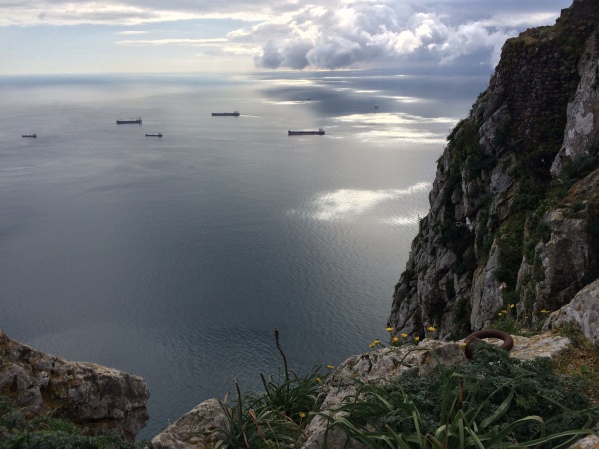 And we ran out of time before we were able to explore the whole preserve. Alas. Because we're pretty sure we'll never be back.