Travel is educational. Among the lessons I learned Saturday:

— There's a French word, which I presume is pronounced “de-TWA,” that means “straight” (in the sense of a narrow water passage between two bodies of land). On our French-language (Michelin) map of Morocco, the watery passage off the coast of Tangier is identified as “Detroit de Gibraltar.” The lightning-bulb moment came when we realized how the American city once known as Mo-town got its name. It too is located on a straight (across from Canada). Americans call it “dee-TROIT” instead of “de-TWA” for the same reason they call the Chicago suburb “dess PLAINS” instead of “day-PLEN.” (Because we don't speak no stinkin' French in America?)

— Getting from Morocco to Gibraltar is not as simple as it might seem it should be. Ferries, it turns out, depart from two terminals, one on the water in Tangier and the other at a new terminal about 18 miles away. Consultation with Idriss (the front desk guy at our guest house) convinced us we'd be better leaving from the Tangier terminal; getting to it — a short, $3.30 taxi ride — was easy. We arrived about 9:20 a.m., and several Moroccan guys who looked like longshoremen told us we had time to buy our tickets and make it on the 9:30 ferry. They were right, but figuring that out and getting aboard (with our SIX pieces of luggage — including the bag with our rugs and the one with our ceiling lamps!) made me think it probably was best that I never was selected to be on The Amazing Race. (At one point, my blood pressure was clocking what felt like 1000 over 500.)

It was a gray, blustery, showery day, but that didn't dampen our spirits, once underway. Steve and I both are such suckers for geography we felt like four-year-olds about to sit on Santa's lap, as we entered that famous channel between the Atlantic Ocean and the Mediterranean Sea. Steve marveled over its historic significance (“The most strategically important waterway in human history!”) while I goggled over the misty coasts — Africa on my right, Europe on my left, both easily visible. On that right-hand coast, I could disembark and WALK to the pyramids of Egypt, the mountain gorillas of Uganda, the gold mines of Johannesburg (if I were crazy, and the logistics weren't an issue.) Ranging out from other side would take me back to Paris and beyond.

We landed in the Spanish town of Tarifa, where we followed many of our fellow passengers onto a free shuttle bus bound for Alcegiras (the town where ferries from the farther Moroccan ferry terminal wind up.) By this point, the sun had emerged, and the hilly green countryside looked beautiful. The Alcegiras ferry terminal seemed relatively empty, but there was a lady in the information booth, and she assured us we could walk to the town bus station in about 10 minutes and there find a local bus to La Linea de la Concepcion (the Spanish town that actually DOES butt up against the British possession of Gibraltar.)

Lugging all that stuff and needing to find someplace to buy euros and having trouble finding the actual entrance into the bus depot, we took more like 30 minutes to reach the slot where the local bus would arrive. Arrive it did, and we stowed our bigger baggage in a compartment on the side and took off. Clean and modern, the bus was filled with folks gabbing away in Spanish, and as it followed the little route map we'd picked up in the terminal, we told each other it almost felt like we were back in San Diego.

But the bus then did something I've never seen an American city bus do — it pulled off the road and into a gas station. “Is he seriously going to fill up?” we wondered. Instead the driver turned off the engine, donned a pair of yellow gloves, and walked out the front door. For a couple of minutes, nothing seemed to happen. Then a burly fellow got out of his seat and disembarked, a cell phone clamped to his ear. A couple of other guys soon followed and out the window we could see them lighting up. A guy with no arms followed them, and a women fished out a cigarette from her purse, lighted it, and stuck it in his mouth. A little boy went out and peed. A toddler girl started howling with irritation. The more time passed, the more it felt like we were caught in an Aldomovar movie. Eventually I looked out the back of the bus, where I could see that the engine cover was open, and a gaggle of passengers was watching the driver work.

Then the driver shut the cover with a clunk, and everyone raced back on board. The driver removed his gloves, now filthy, started up the engine, and we moved on. Maybe 45 minutes after climbing on the bus, Gibraltar finally came into view:

To Steve's delight, he was able to track our progress using Google Maps on his iPad. (We think it was picking up random wi-fi hot spots as we drove along.) 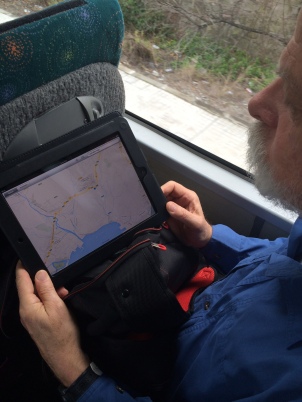 La Linea was the last stop, and as had been the case everywhere we'd been since landing in Tarifa, we saw no hint (in the form of signs or directions) that Gibraltar was anywhere near. We wondered if this had something to do with the Spanish resentment of Britain's owning the chunk of land that by all rights looks like it should be part of Spain. They probably didn't have much interest in promoting Gibraltarian tourism. But the rock of Gibraltar is a pretty unmistakable landmark, and we quickly found it. Before we walked to for the border crossing, Steve astutely spotted a Burger King and suggested we get a bite to eat. (Many hours had passed since breakfast.) In the Burger King, we learned that:

— Spaniards have happier fast-food options than Americans do. Among the drink options was beer, available in three sizes. I tried to order two Whoppers, one small fries, and two small beers, and the girls behind the counter advised that it would be cheaper to order two of the 6-euro ($8.50) meal deals. “Those come with beers?” I was incredulous. They did indeed.

The rest was easy again. I changed dollars to British pounds (the currency of Gibraltar) just outside the crossing, then we breezed through; the solitary policeman barely glancing at our passports. A few steps further, and we confronted a bright red, classic British telephone booth. We found similar phone booths at many places in Gibraltar, despite the fact that almost everyone in the world now uses cell phones. I guess they symbolize the old Gibraltar — and maybe the present one too. 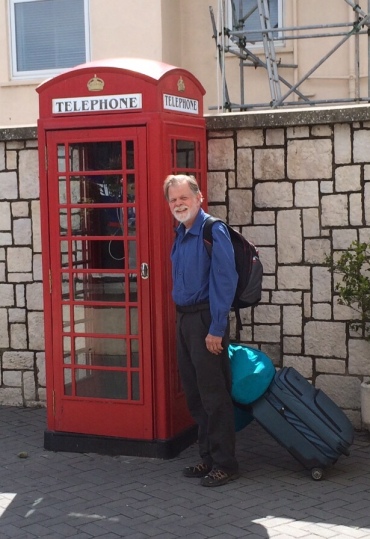