So far this trip has been spectacular. Steve and I both feel great. It will rank among my most satisfying and interesting journeys of all time, I’m already sure. But our transit to Malta was a reminder that travel in the time of Covid is not for the faint-hearted. 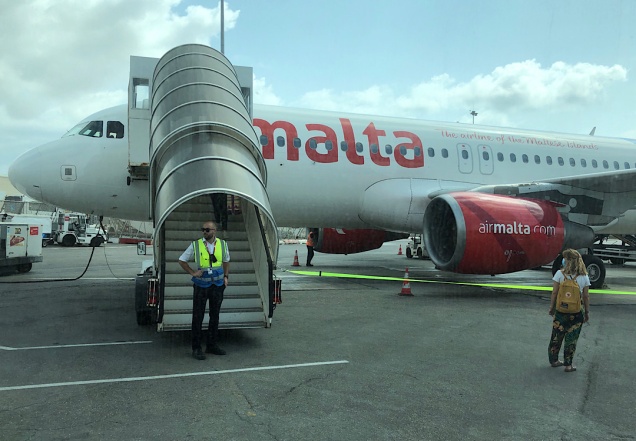 Malta, the third-largest of the European microstates, is smack in the middle of the Mediterranean Sea. You can get to it by ferry, and I tried to arrange that. But ferry rides ultimately proved too complicated.

That left airplanes. To get there, I booked us on an Alitalia flight leaving Rome around 5 pm Thursday afternoon (9/23) and arriving in Malta about 6:30 pm. From Malta to Sicily (our next stop), I got seats for us on Ryanair. But then from Sicily to Nice (France), Alitalia once again seemed like the best choice.

I knew Alitalia was iffy. The Italian airline filed for bankruptcy back in 2017, but they’ve managed to continue operating since then. They treated me well in 2020, the first time I had to cancel our microstate trip (because of the pandemic). They ultimately refunded every penny I had paid. This time around, I spent more for refundable Alitalia tickets because I knew things might get snarled up.

The first hint of the coming disaster arrived in my inbox the day we got to Liechtenstein. Alitalia had canceled our morning flight from Rome to Nice, the email informed me, moving us to a late-afternoon flight that would require us spending most of a day in the Rome airport. At least as disturbing: when I went online to look at alternatives, I found a note at the top of the page saying Alitalia would sell no tickets after October 15. That’s how we learned they were finally going out of business.

I scrambled and managed to book flights to Nice on Lufthansa — about the same price, if longer (we’ll have to fly from Sicily to Munich to Nice, requiring almost 6 hours in airports and on planes instead of three and a half.) But since our Alitalia tickets were fully refundable, I had some hope of getting that money back.

This turn of events made me nervous, though, and last Wednesday, the day before our flight to Malta, I made sure to check in and get our Alitalia boarding passes. The flight was on time, the website said, and with the passes in my Apple wallet, I felt relieved.

Less than two hours later, while eating what we thought would be our last dinner with Megan, I got another email from Alitalia, this one informing me our flight the next day, for which I had just secured boarding passes, had been canceled. No explanation was offered for why.

How could we get to Malta now? Would our microstate streak be foiled by Italian flakiness? Google Flights didn’t offer any good alternatives, but when I checked the Air Malta website, I found a 10 am flight Friday morning for a fraction of what the Alitalia tickets had cost. Only three seats were left, but I managed to secure two of them for Steve and me. This change in plan required us to cancel the hotel I’d reserved in Malta for Thursday night. Instead we got a room at the hotel near Rome’s airport. Megan was already booked in there to spend the night before her departure on Delta for the US — which coincidentally left at the exact same time as our Air Malta flight: 10 am Friday morning.

In some ways, this change proved fortuitous. It gave us all of Thursday with Megan, and the three of us shared a phenomenally good meal that night at a waterside restaurant near the hotel. Because of concerns over the longer lead time required for a US flight, she decided to take the 6:45 am airport shuttle the next morning, while we would go on the 7:30 one. We said our heartfelt goodbyes in the hotel lobby Thursday night.

I got the first WhatsApp message from her Friday morning, just a moment after we had boarded our 7:30 shuttle bus.

Since our flight was also due to depart at 10, this sent a jolt of adrenaline through my system. Later, we learned that at hundreds of striking air workers were staging a sit-in that morning on the highway between Rome and the airport. To protest EU constraints on the hiring of Alitalia workers by the new carrier that’s scheduled to replace it (called ITA), they reportedly brought a fake coffin draped with European flags and plopped it in front of the airport.

The coffin must have gotten there after we did. Steve and I arrived to find the airport eerily empty. Though Alitalia’s presence had obviously dominated Terminal 1, all human trace of it had vanished: no staff, no passengers.

Happily, we found humans behind one Air Malta check-in counter; there we queued up behind maybe a dozen other passengers. When we reached the desk and the stressed-out clerk asked for our proof of vaccination and Maltese Passenger Locator Form (PLF), I felt almost smug showing her the QR codes for both. She unsettled me, however, when she also asked for our VeriFLY clearance for Malta. VeriFLY is a Covid document-verification app that we had downloaded in San Diego. We’d jumped through all its electronic hoops and had gotten a cheery reassurance that we were cleared for travel there. But we’d heard it was no longer required, so we hadn’t checked ours in a while.

When I pulled up the app, a disconcerting message informed me “Needs to be completed!” We protested that we HAD completed it, but the app had somehow forgotten what we’d told it, and besides, we had also just presented our vax proof and PLFs. But the desk clerk was flinty. No green check mark from VeriFLY, no Malta.

Fortunately, we had arrived at the airport with lots of time. So we managed to jump through the VeriFLY hoops again, get our boarding passes… 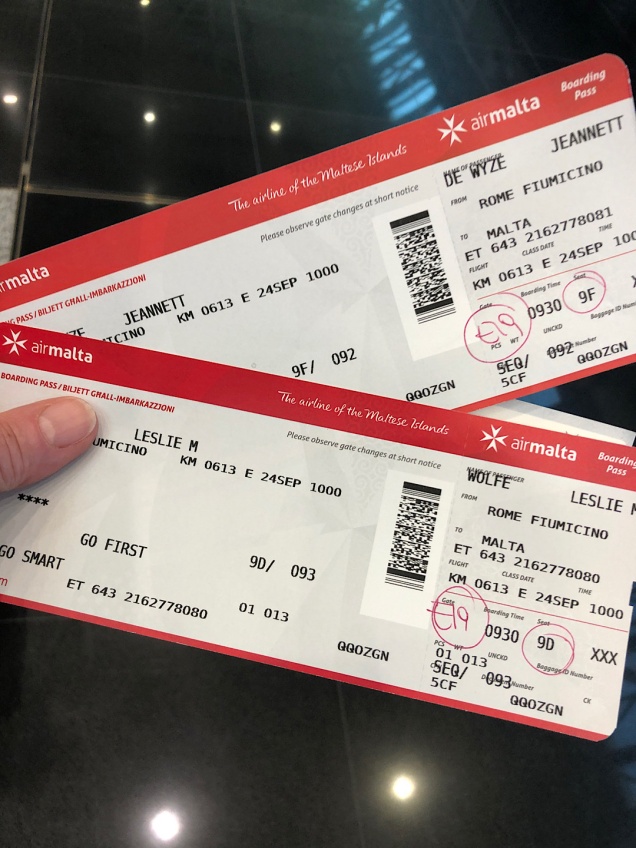 …make it through yet another documentation check at the gate… 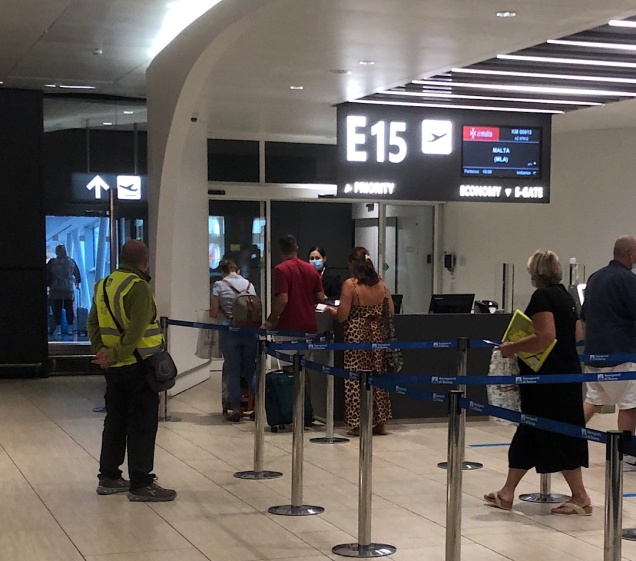 …and more upon arrival. My bags were searched more thoroughly than any time in memory. (Oddly, Steve received no such scrutiny.)

In the end we arrived, however, and now I can say unequivocally: it was worth it. But that’s another story.