No electrical bolts struck anywhere within earshot of us Thursday, nor did it rain more than a few sprinkles. The lightning instead was the speed with which we toured Andorra, stop #1 on Steve’s and my Grand European Microstate Tour. Barely 60 hours passed from the time we pulled into the underground parking lot of our hotel in Andorra la Vella (the capital) Wednesday afternoon (9/8) to when we sped out of town shortly before dawn two days later. However, we crammed more interesting activities in it than I had thought would be possible.

Before going to Andorra, I’d never given much thought to why France and Spain are two separate countries. Leaving the broad flat planes of southwestern France, then weaving first through verdant foothills, then into one hairpin turn after another was an aha! moment for me. Thickly wooded, the Pyrenees are beyond rugged — rocky and vertiginous as any mountains I’ve seen anywhere. It was suddenly easy to understand why, once Catalonians had staked out this enclave and gotten recognized as an independent fiefdom (in 839), neither France nor Spain lusted for it enough to fight a war over. Isolation has advantages. The Andorran borders have been more stable over the centuries than any other country in Europe.

Happily, the French tollways and all the Andorran roads we traveled on are in superb condition. From the border it took us less than 45 minutes to reach Andorra la Vella. It fills a narrow valley; the mountains surrounding it rise up high and press in close. 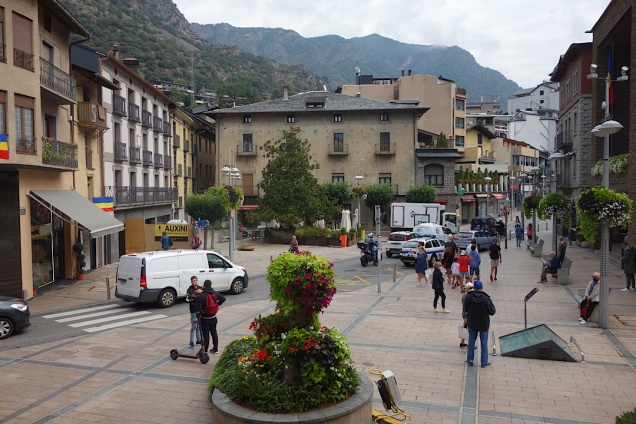 Around 77,000 Andorran citizens inhabit the whole country. They welcome roughly 10 million tourists per year, which makes the ratio between residents and visitors the highest in the world. Mostly the tourists come from two reasons: to take advantage of all the mountains (skiing in winter and hiking in the summertime) and/or shop. Andorra’s like a great big duty-free store. I bought nothing except for a stamp (to stick on my notebook), but window-shopping on Andorra la Vella’s main shopping street was entertaining in itself: a parade of storefronts flaunting pricy watches, perfume and cosmetics, running shoes, guns (and Samurai swords!), jewelry, booze, designer clothes… and, of yes, tobacco products. For some reason, tobacco grows well in Andorra; locals have cultivated and exported the noxious leaves since the 1800s. In the lobby of our hotel, I gaped at the first cigarette-vending machine I’d seen in decades. People vape in Paris, but in Andorra, they smoke the old-fashioned way and sell the old-fashioned brands.

Steve and I rambled through the twisty passages in the old town, and popped into the tourist office down by the river, where a helpful staffer gave us maps and brochures. Thanks to her, we learned that hiking trails overlook the town on both sides of the valley. We originally had wanted to spend the day hiking in the countryside but the stormy forecast made us shelve that plan. It felt like a gift to instead be able to do a mini-hike. We easily ascended from our hotel to one of the paths and followed it for about two miles. 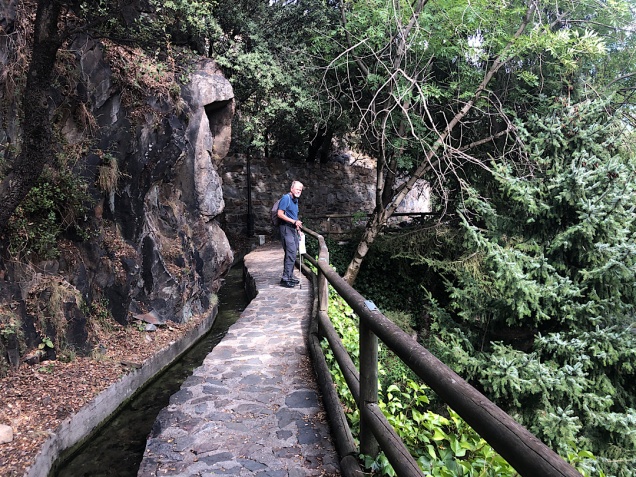 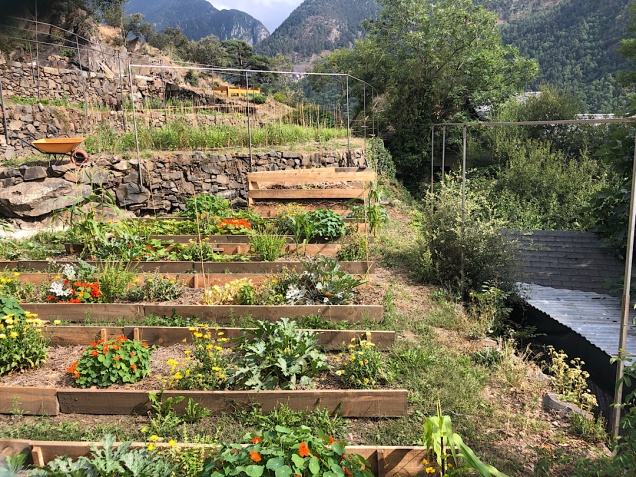 Among other sights, it led us through the most extensive complex of communal garden plots we’ve ever seen. Roosters crowed and hens clucked while apartment complexes covered the distant hillsides. It was an extraordinary contrast.

Eventually we left the path and descended to one of Andorra la Vella’s tourist wonders: a glass-walled, 18-story structure housing the Caldea spa, said to be one of the largest in Europe.

Sadly, we couldn’t bring in our phones (because we had nothing with which to waterproof them) so we have no photos of the wonders within it. Imagine, if you can, a chlorinated theme park, containing at its heart an enormous lagoon filled with warm, chest-deep water. Several gigantic bowls were set within it: aerial jacuzzis accessible by staircases. Off the central area, we wandered into saunas and steam baths and other piscine variations: one room with jets of water that massaged you, an “Icelandic pool” where you could walk through adjoining basins filled with icy and and very warm water. On one outdoor balcony we paddled in a “panoramic pool” and enjoyed more watery jets. On another we swam into a circular track through which a strong current coursed. We spent almost three hours in the complex, marveling at all the weird aquatic pleasures. (One soggy irritant: the fact that cloth face masks provided by the facility were mandatory throughout.)

Because of all its tourists and duty-free shoppers, Andorra ranks among the more prosperous countries in Europe. Andorrans live longer than the citizens of almost every other place on earth (around 83 years, on average). Crime is almost non-existent, and stress is minimal.

The mellow nature of life here was palpable in the plaza that’s been at the heart of Andorran life for centuries. A large, stone three-story structure dominates one side of it.

Built more than 500 years ago as a noble family’s home, it was later acquired to be the seat of Andorra’s government. We toured it and chuckled at its coziness — the large kitchen where the councilors would sit around a large hearth to warm up… 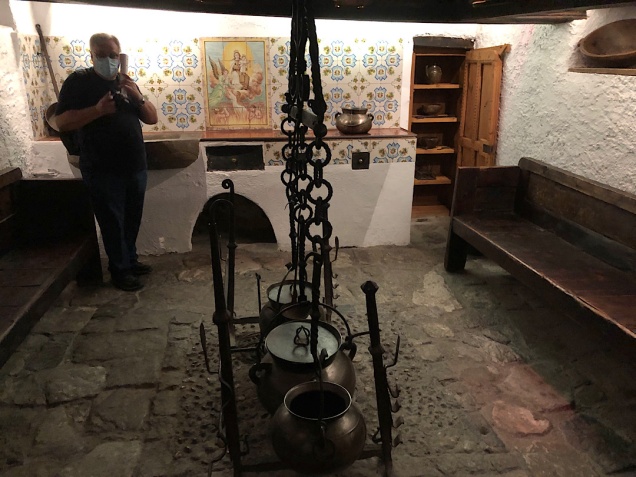 …the wooden cabinet with seven separate (old-fashioned) locks in which Andorra’s founding document is stored. (Today it still requires an official from each of Andorra’s seven political districts to use his key in order to open it.)

Only in 2011 did the country build a big modern parliament building; this austere concrete edifice stands on another side of the plaza. It’s the equivalent of the US Capitol. “Where are the guys with machine guns?” Steve wondered aloud when we approached it. At the Elysee Palace in Paris, every corner bristles with military muscle. I haven’t been to the White House for a while, but I assume it’s at least as aggressively intimidating. Andorra has no military, but even a watchful policeman would have made this heart of Andorran political life look more governmental. There was none. 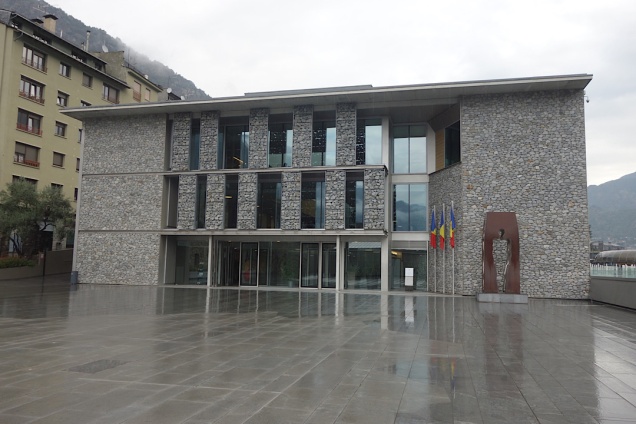 We pulled open the front door and walked in, looking for someone who might direct us to the tourist office; braced for being stopped and questioned. Not a soul was in sight. I was too shy to knock on one of the closed office doors, but no one would have stopped me had I tried.

We walked out of the building and gazed at the nearby sculptural installation, a bevy of statues saluting poets.

If you want to live long and prosper, they seemed to whisper, moving to Andorra and reading poetry isn’t a bad formula. But we’ve bade goodbye to this and pressed on to Luxembourg, an administrative center for the European Union, where the memory of those statues feels like a dream.