Getting into Guatemala was easy. After deplaning, I merely had to stop for a moment to show my vaccination card to a young woman (she looked about 14) in a nurse’s uniform. She glanced at it for perhaps 3 seconds. Then I was in!

We knew that the next stop on our itinerary — Panama — would not be so frictionless. The government there has been requiring either a PCR test or an antigen test administered no more than 48 hours before arrival. (I kept checking to see if that would change, but it didn’t.) Our first Guatemalan driver, Alfredo, said we could easily get either at the Guatemala City airport before our departure. But that sounded potentially stressful, so we also asked the person manning the front desk at our hotel if tests were readily available in Antigua. He gave us a couple of options: two places that would send someone over to test us or another just down the street. Laboratorio La Merced was administering both tests in its clinic, he said.

We figured the onsite service was bound to be cheaper. But which one to get?

I was a little afraid the PCR test might so sensitive it could pick up some trivial, asymptomatic exposure. Charming as Antigua was, I didn’t want to be stuck there inadvertently.

On the other hand, neither Steve nor I have been tested for antibodies since we got our second vaccine doses back in February. (I assumed antigens were some variation on antibodies.) We agreed it would be interesting to be tested for them. We were virtually certain to have lots, but if the test for some reason came back negative, we could follow up with a PCR test, either in town or at the airport.

Monday morning promptly at 7, we walked the few blocks to the clinic. Iron bars blocked entrance into its unprepossessing foyer, and for a moment we wondered if it was closed. Then I noticed a cord attached to a bell behind the bars. I reached through and yanked. A moment later, the gate buzzed. We pushed our way in.

A taciturn young woman behind the desk listened to what we wanted. She said we would have to make an appointment, and the test would cost 375 quetzales (about $48.50) per person). Happily, her appointment book appeared to be empty for most of the afternoon, so we secured a spot at 1 pm.

We returned at that hour, gave the receptionist our passport numbers, and in a moment, I was called into a small exam room nearby. The hazmat-suited technician in it asked me to fill out a more detailed form. Then he had me take a seat on a wooden chair against the wall. He extracted a long cotton swab from a kit and inserted it deep, deep up each nostril. I’ve had a couple of PCR tests in San Diego (required before minor medical procedures), but those probes were lightning quick; they didn’t bother me. This swab was thicker, and the guy twisted it for a second or two. It felt a mixture of ticklish and creepy; I half-laughed, half-moaned.

Steve was next, and the technician allowed me to stay in the room while he was processed. 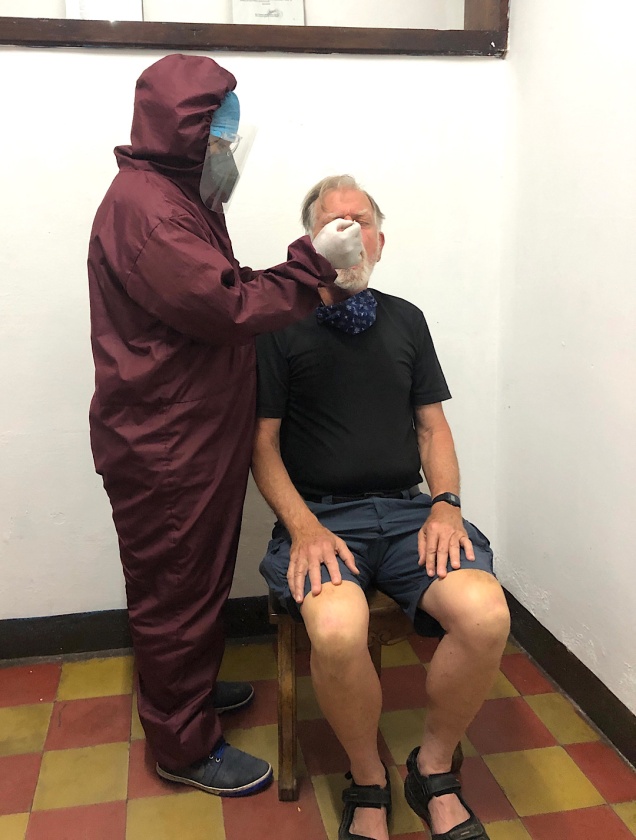 We were instructed to return in a half-hour for the results. We got coffee at a nearby cafe, then went back. Another tug on the bell; another confrontation with the inhospitable receptionist. She didn’t say a word but pulled out two pieces of paper and began folding them.

She opened them for us to see, and the word “Negativo” leapt from the pages. I think we groaned. No antibodies? How could that be? 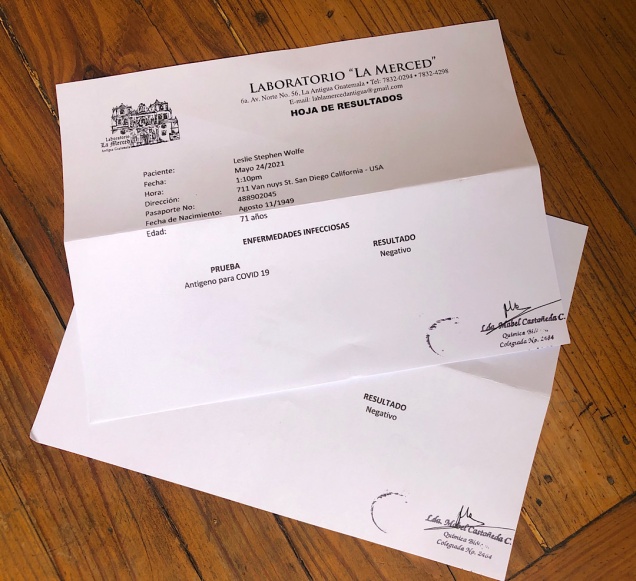 The receptionist frowned. She seemed taken back by our reaction. “You don’t have Covid,” she declared in Spanish. For a second, I wondered if we had somehow gotten the wrong test. Then the light began to dawn. “Es bueno, este resultado?” I asked her. Would they let us travel to Panama with this result? Looking annoyed, she called another guy from the back of the clinic. He spoke no English either but made it clear: a negative antigen test was what everyone wanted.

Later that afternoon, a Google search educated me: antigens (bad) result from the presence of pathogens in the host; they in turn trigger the body to start making antibodies (good) to fight the illness. How could I — formerly science and medical writer? — missed learning this? I felt deep chagrin. Still, Steve and I were relieved to have what the Panamanians appeared to be demanding.

On the very elaborate government website, the Panamanians seemed to be saying we also needed to create online accounts with their Covid-tracking software. We struggled for at least a half-hour with page after page of questions, including a security one. (“In what city did your parents meet?” was the one I chose.) We rolled our eyes at the thought that ordinary Panamanians were all filling this thing out. And indeed, at the airport yesterday afternoon, no one mentioned it, and we’ve heard nothing about it since.

We did have to pass through a slightly more formal gauntlet than we had encountered in Guatemala. As we came down an escalator to the immigration portal, we first had to walk up to one of three plump ladies wearing masks and what looked like plastic raincoats. (I tried to take their photo but instantly got yelled at.) One of them looked at each of our tests and compared them to our passports. She nodded and said the magic words: welcome to Panama.