The world is a big place, and Steve and I hunger to see as much of it as possible before we die. That’s why we rarely go back after an initial visit to most countries outside North America. The list of places we’ve traveled to repeatedly has been short: France, Italy, Japan. I’m thinking, however, that I need to add Uganda.

Before our first trip here, in 2013, I would have bet it would be our only one. That was our first (and I would have predicted only ever) visit to East Africa. In the course of it we also swept through Rwanda, Tanzania, and Kenya. But just a few months before we went, something extra got tacked on.

We have a close friend, Leigh Fenly, who in 2006 co-founded a San Diego organization called Women’s Empowerment (WE) International. Its goal is to improve the lives of some of the poorest women in the world. In the spring of 2013, WE had been approached by a group with a project in southwestern Uganda that was providing tiny but invaluable loans to older women who were raising grandchildren orphaned by AIDS. Amazingly, Steve’s and my itinerary would be taking us not far from Nyaka (the central village), and we managed to adjust it to allow for a one-day visit. We came away so moved and impressed that WE began a partnership early in 2014 with the Nyaka AIDS Orphans Foundation’s granny-group project.

Steve and I also agreed to be the liaisons between the San Diego folks and the Ugandans, a job we’ve continued to fill ever since. In that role, we returned to Nyaka accompanied by another WE member in 2017, and our current travels (this time with 6 WE leaders in tow) were driven by the desire to go back for another on-the-ground assessment of how the Ugandan “micro finance” project has been playing out.

We’ve been dazzled. In our two days in the field, the 8 of us interviewed more than a dozen individual grandmothers, learning about what they’ve done with the loans they’ve received from their groups. We also met with two large granny groups located near the Bwindi Impenetrable Forest (home to some of the last mountain gorillas in the world). 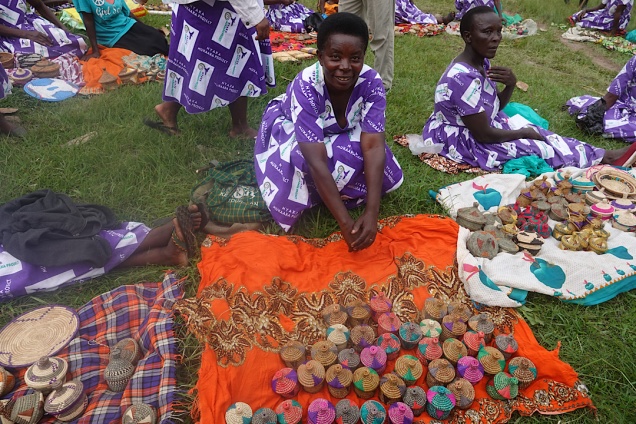 Progress that was already starting to be evident three years ago has continued and seems to be accelerating.

For example, the first one-year loan ever granted (back around 2007) to one of the two groups we visited Saturday was for 200,000 Ugandan shillings — about $75. The group then made tiny loans — the equivalent of $5 to $10 — to individual members. Each woman would have the money for three months, then she would have to pay it back, along with about 15% interest. With so little money, a granny might only be able to buy a chicken or two. But she could hatch some of the eggs, sell others, and come away with a bit of extra cash — money that more often than not she would use to pay her grandkids’ school fees.

Over the last six years, as WE has donated money raised in San Diego, the Nyakans’ central revolving fund has grown from just $7,000 to almost $250,000 (including profits from the interest on the group loans and about $175,000 from WE). That’s meant granny groups have been able to receive bigger and bigger annual loans. The group that began with a $75 loan now has a loan of more than $4000. 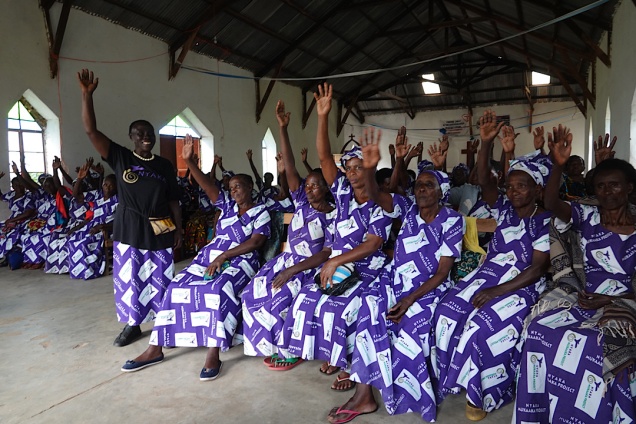 Grannies with bigger ideas have been able to get bigger and bigger loans to help them realize their dreams. Take Meleth, for example.  She’s 52, currently raising 6 grandchildren (one disabled). 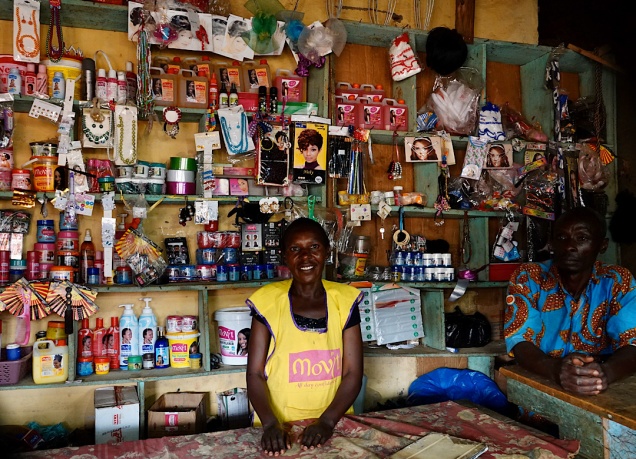 She joined her granny group just a few years ago and has since become its treasurer. She’s gotten two substantial loans, first one for the equivalent of about $82, then another for almost $200. She’s used that money to build up a beauty salon that would be respectable even by Kampala standards. She’s installed a hair dryer and a wash basin; has diversified into providing decorations for weddings and other celebrations, as well as catering. She told us she currently serves 25-30 clients during her typical six-day week. (A Seventh-Day Adventist, she closes Saturdays.)

Because of her loan money, 54-year-old Robinah started a restaurant that she estimates feeds 40-50 customers a day. Business is good, but she thinks it would be even better if she could buy a refrigerator and sell cold drinks. (That would cost between 1 and 1.5 million shillings, about $275-$400.) 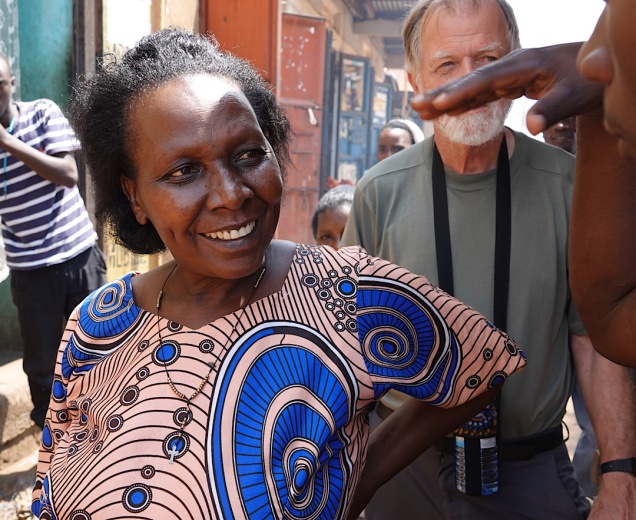 Many grannies still do simpler things: acquire goats or chickens or pigs; hire help to grow more cash crops like coffee. We met 65-year-old Ketty Turiyatunga at the Friday market in the little village of Nyamirama.  She was filling baskets with sweet potatoes that she hoped to sell for about a dollar. Her loan was for less than $14, but she seemed happy to have it. 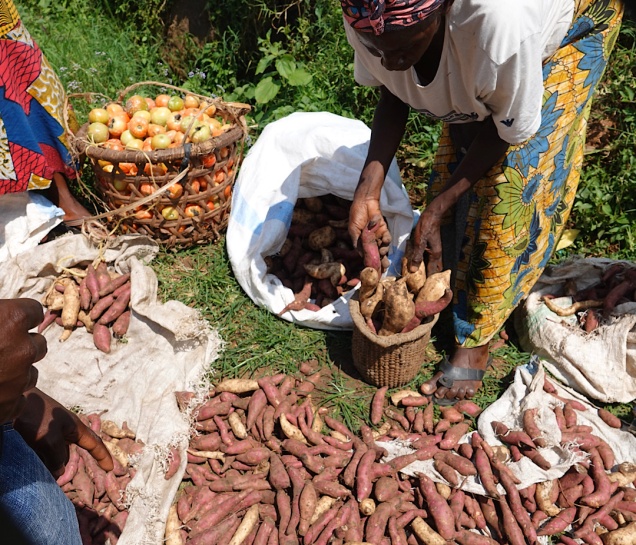 Margaret Tumuhimbise, 67, has a small loan too, but she uses it to buy products like tomatoes to supplement the pineapples, sweet bananas, and maize she grows and sells at a stand in the local market. 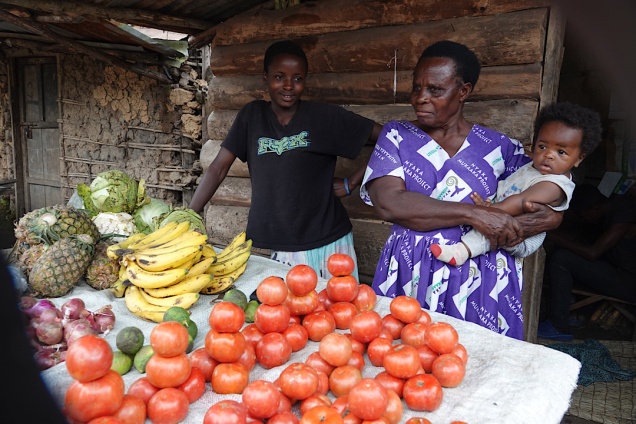 Note the uniform Margaret is wearing. On our first visit, no grandmothers had uniforms, but by 2017, one large group had had some made. Since then more and more groups, maybe 60% of the 10,000 grandmothers who are currently Nyaka granny-group members, have used their profits to buy the distinctive outfits. They wear them with pride. Folks respect and admire and even envy them now, whereas just a few years ago, they were despised for being dirty and poor and old and bad-smelling. Now they all have soap and toothbrushes. Now they have hope they won’t ever have to beg again.

The Nyaka group’s leaders are talking about getting another 10,000 grandmothers organized into groups that will receive loan money. They envision doing this within just a few years. Some dream of expanding still further, going country-wide.

I have to confess that Steve and I were skeptical seven years ago. Billions have gone into aid for Africa over the course of our lives, and much of that money has been squandered. But, started by a Ugandan, run by Ugandans, decentralized and shaped by leadership at the village level, this program looks like success to us. Even if Uganda didn’t have any great natural beauty and touristic pleasures, I might be tempted to return some day to see if the human thrills continue.

7 thoughts on “Ugandan grannies: better than any tourist attraction?”