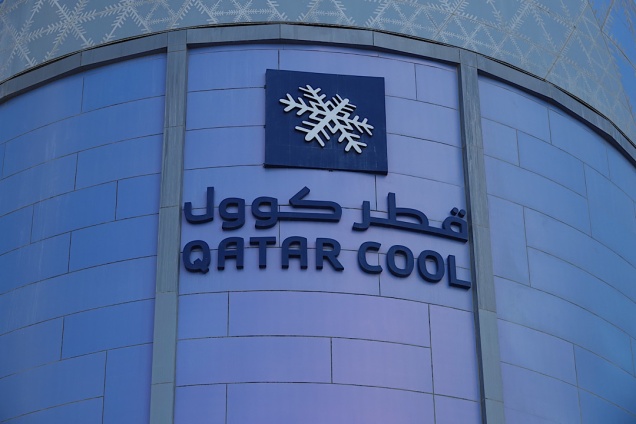 Sad as we were to lose half a day of the time we’d planned to spend in Doha (capital of the little Arabian kingdom of Qatar), Steve and I still managed to cram a lot into the remaining day and a half. I formed some strong opinions and was most captivated by three things:

1) How new so much of it feels. I’ve never been any place that felt newer. Although this part of the world is ancient, the city of Doha is racing to receive the world in 2022 for the World Cup, and much of the effort is just now coming to fruition. A gleaming subway system that includes three respectable lines opened less than a month ago. 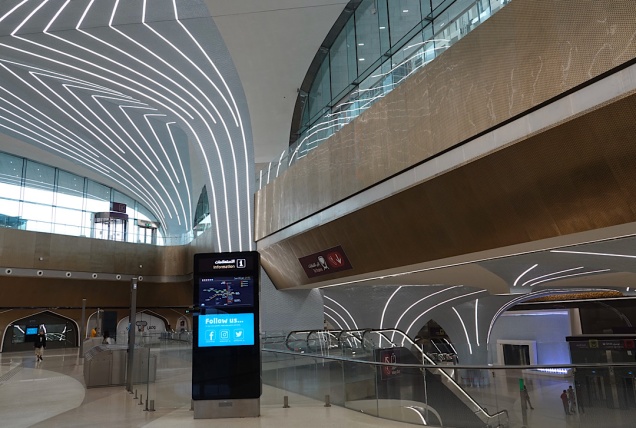 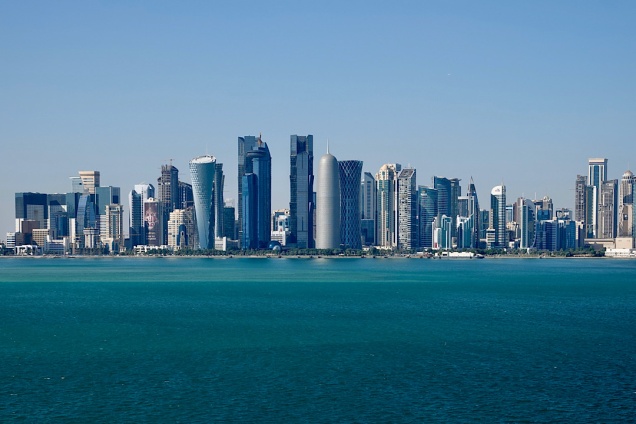 2) A small section of the old heart of the town has been preserved. That’s where we stayed, next to a market area (Souq Waqif) that looks cleaner and feels safer than any other Middle Eastern souq I’ve strolled through. 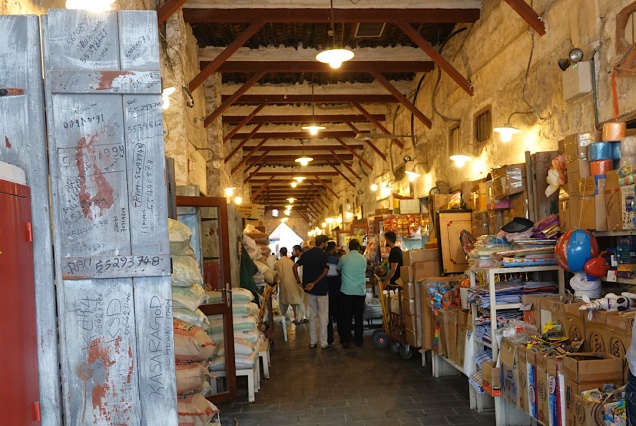 The Qatari vendors don’t ever hustle or hassle visitors. It was pleasant, if a trifle bland. What seemed quite extraordinary, however, was the nearby falcon souq. Falcons are an ancient, still venerated, part of Arab cultures. But we’ve never seen such a concentration of shops selling nothing but falcons and falconry gear. Qataris train the raptors to hunt (for sport), and the shopping we observed looked very serious. One merchant told us the cheapest birds go for 2000 reals (about $550), while the biggest and most gorgeous ones fetch 200,000 to 300,000 ($55,000 to $83,000). 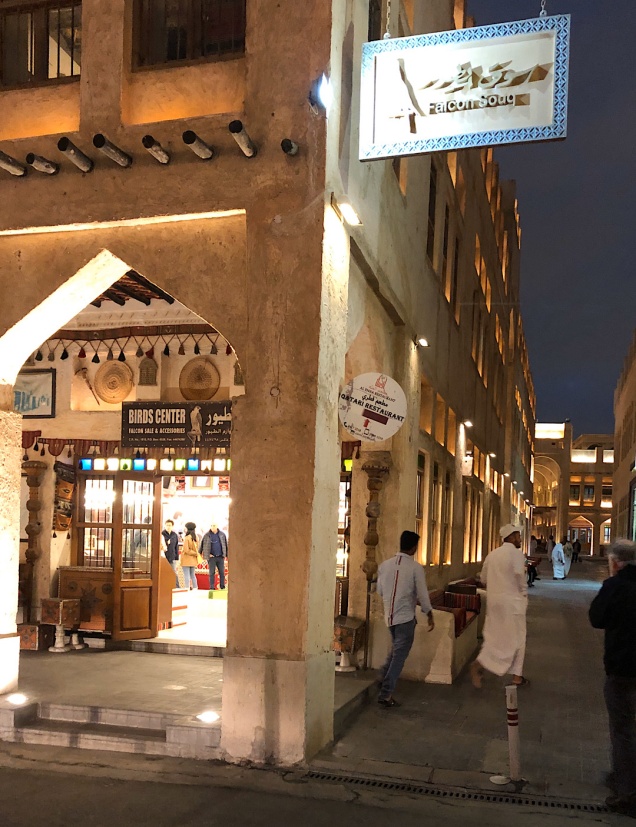 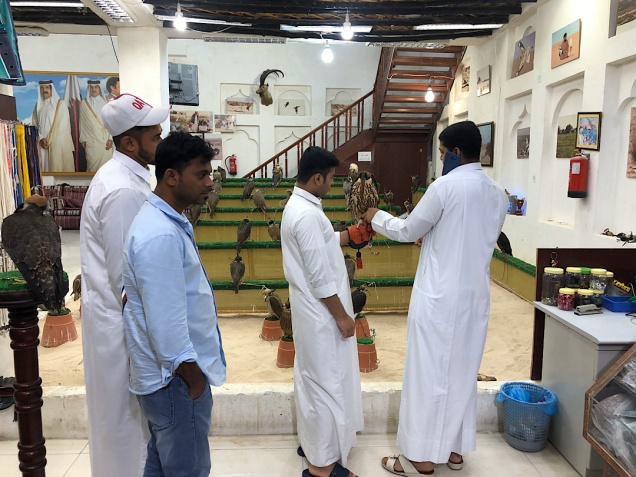 3) We visited two museums, and both were knock-outs. The Museum of Islamic Art, designed by architectural superstar I. M. Pei, contains hundreds of exquisite objects… 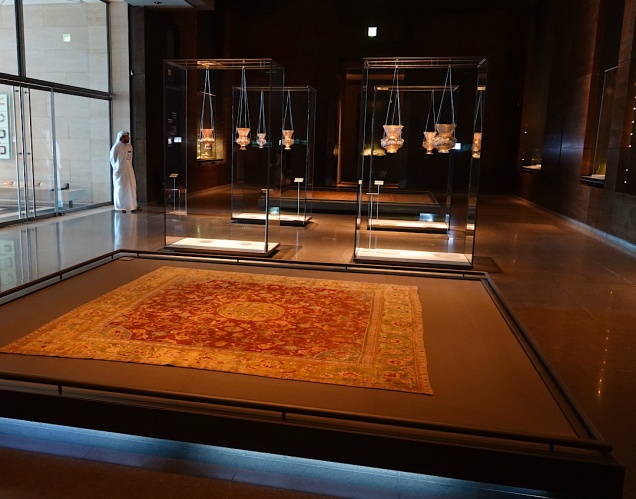 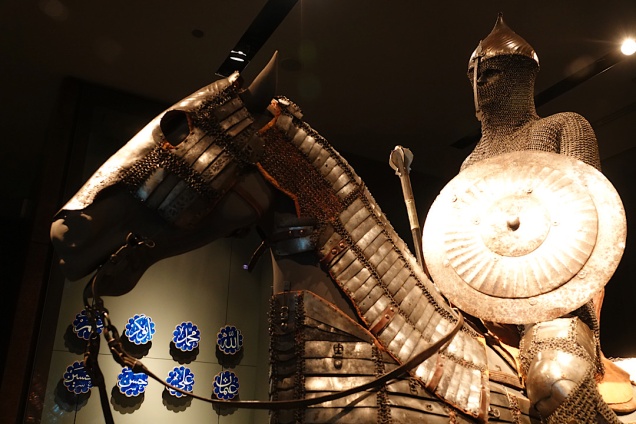 …armor to ceramics, and much more. The building, exquisite on its own, interplays beautifully with the striking site. 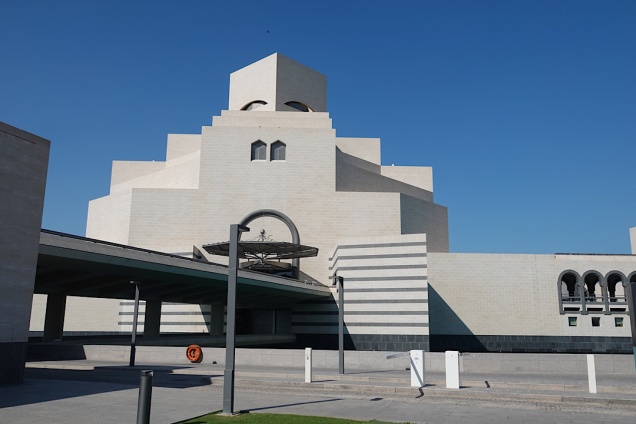 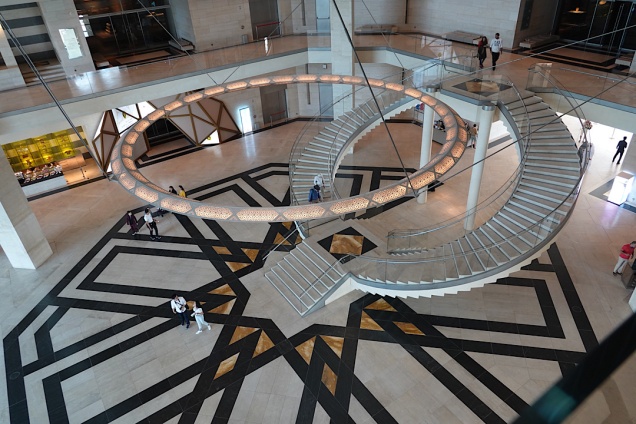 The National Museum of Qatar, which opened less than a year ago, impressed us even more. 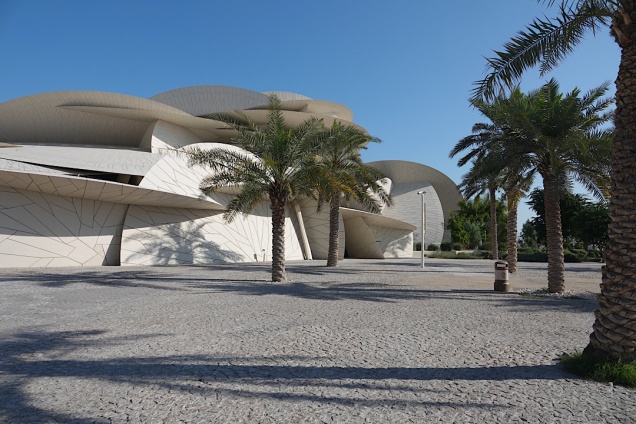 We walked in hoping to erase some of our almost-complete ignorance of the country, its history, and recent development. In less than three hours, we succeeded. Or more accurately, the museum’s designers did, through story-telling tools combined in ways we’ve never experienced anywhere else. No gallery is a simple cube. Rather, walls meet obliquely, creating complex spaces, and most of those walls are used as giant projection screens, filled with mini-movies that, together with music and other sound effects, complement the objects and interactive displays. 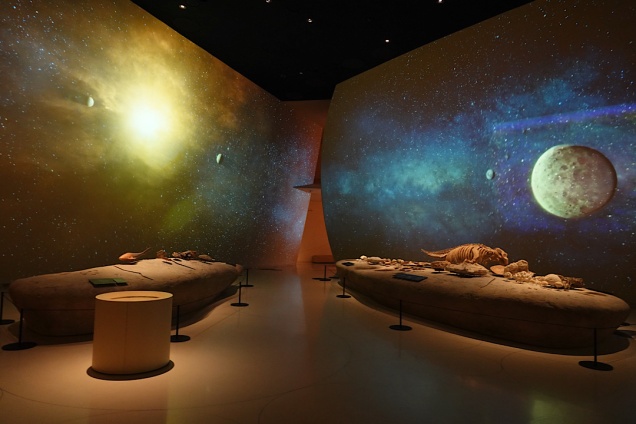 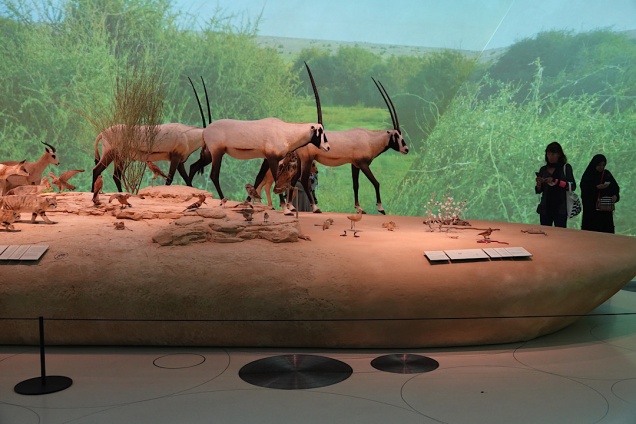 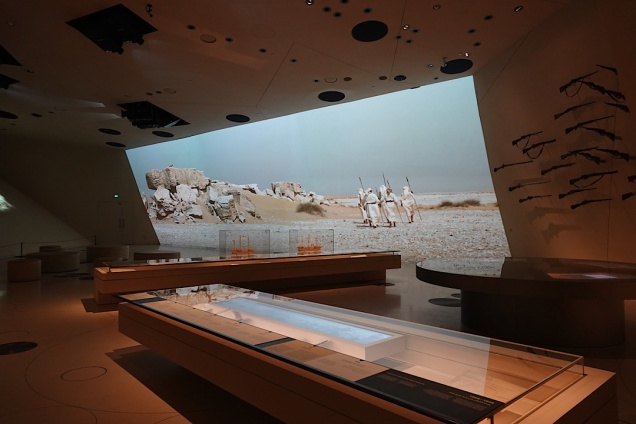 You start out a million years ago, and stroll right up to the present (including most of a gallery devoted to the onerous embargo placed in 2017 on Qatar by its Arab neighbors, harsh treatment that continues today. A clear understanding of what underlies that brouhaha is one of the few things we failed to come away with.)

I walked out of the national museum swollen with pride in Qatar; imagining how I might almost want to move here (if the weather weren’t hellish nine months of the year.) My knee, which I injured less than a week before we left San Diego, was throbbing; we’d walked for hours. But Steve wanted to make a quick metro trip to the other side of the bay to at least glimpse what was at the street level of that stunning skyline.

I couldn’t resist that either, so we rode the metro for three stops and emerged to gawk at the buildings… 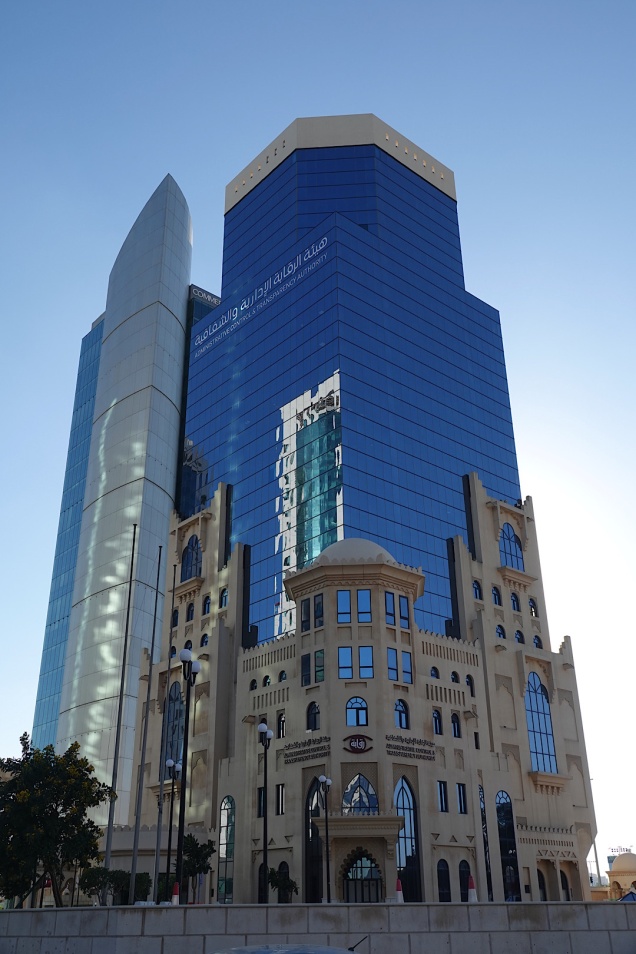 …and stroll up the wide boulevard that runs alongside the metro station. Cars whizzed by, but we saw almost no other pedestrians. After walking just a few blocks, we were about to turn around, when a wacky architectural detail caught my eye. I captured it with my telephoto lens, then wheeled to return to the metro station. At that point, a youngish man dressed in the long white gown and headgear that locals wear stepped up to us and asked if we had IDs. “Who are you?” we queried. “Police,” he replied.

He took our passports and photographed them with his phone, then gave them back. We turned to go, but he followed us. We needed to wait, he ordered.

“Why?” Steve demanded, glowering. Another young guy dressed in jeans and a t-shirt stepped forward and identified himself as a plain clothes cop. We had been taking photographs of the nearby 12-foot wall, he explained. This was forbidden.

We were stunned. We pointed out that no signs warned of the photographic prohibition. We were clueless tourists! How were we to know?

Over the course of the next half hour, no one ever answered that question. They pointed out small, hard-to-miss signs on the wall that said, “Don’t Come Near” (in English and in Arabic). We retorted that these were hard to see and more importantly said nothing about taking pictures.

More men appeared, some wearing military uniforms adorned with patches reading “General Head Quarter.” They shrugged. They assured us there was really no problem and that we could go in just a minute. But then they took away our passports and disappeared with them into the complex. Time passed. Eventually, I began insisting that I really, REALLY needed to get to a toilet and VERY SOON! This was not quite true, but I hoped it would make them uncomfortable and expedite our passport release. Still more time passed. I crossed my legs and started hopping up and down, hinting of dire imminent consequences. I also showed them the photos on my camera, which really did not include anything other than this… 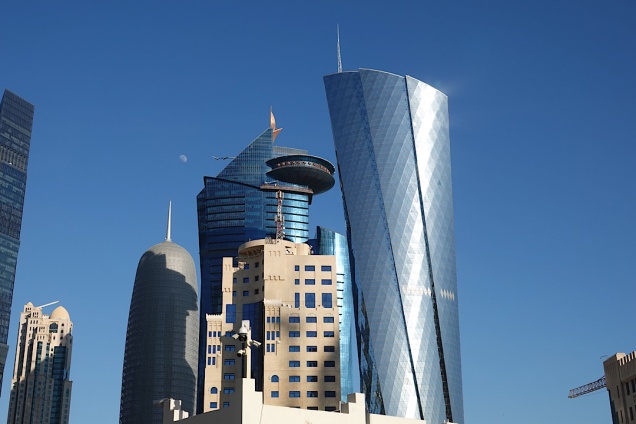 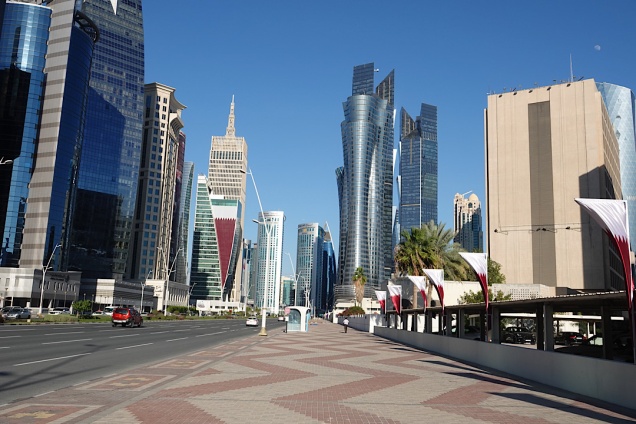 (Actually, you can see the forbidden wall way in the distance, if you enlarge my street view.

But how threatening should that be?)

Finally after close to 40 minutes, another young man in the white robes and headgear appeared. He shook our hands (or mine at least; Steve continued glowering). He offered no explanation but he did give us back our passports and let us go.

Racing back to the metro station, Steve and I agreed we had never felt scared. But we both felt keenly aware those guys could have complicated our departure from Qatar. We’re happy they didn’t. (I’m writing this from our plane, en route to Entebbe in Uganda.)

I still like Qatar. I’m happy I got to visit it. But any pipe dreams I might have nursed about returning went up in smoke outside that mysterious walled compound.