I knew two bad earthquakes hit Christchurch in 2010 and 2011, but they didn’t become real for me until the night Steve and I were eating dinner in Kaikoura. Looking out the window next to our table, Steve exclaimed, “Is that a bobcat?” The animal he was staring at seemed too small to be that, but it lacked a tail. “He lost it in the earthquake,” our waitress (the wife of the owner) told us. Her house in Christchurch had also collapsed, she added, and she and her husband had lost the five restaurants they owned. They’d recently moved to Kaikoura, trying to start over. This lady was a hearty, jokey sort of person, but the way her face subtly tightened when she talked of the disaster betrayed how overwhelming it had been. Watching her face, I struggled to keep mine composed.

A few days later, on the Routeburn Track, I asked one of my fellow trekkers, a longtime Christchurch resident named Louise, how the quake had affected her. She used to work in one of the high rises that had collapsed, she told me. “Nine of my friends died in it.” Two others had lost their legs. For a while, the funerals had been incessant.

Over the two days we spent in Christchurch (our last bit of time in New Zealand), the quakes got more and more real. The first thing we did Thursday morning was to head to Quake City, a facility dedicated to explaining what happened on those two fateful days. 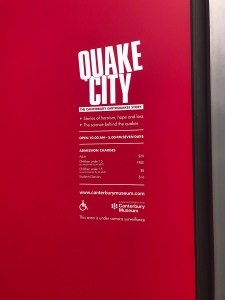 One of the things that shocked me most was learning that the two earthquakes which all but destroyed the central city were far from the worst that’s expected for this region. The huge fault, the one capable of moving with a force of more than magnitude 8, runs up the east side of the southern Alps, just an hour or two outside Christchurch.

What I also didn’t know is that most Christchurch residents never thought they were vulnerable to earthquakes; they had never felt any jolts for most of their lives. The 7.1-magnitude temblor that ripped the Canterbury plain in 2010 was thus a shock both physically and psychologically. But it struck at 4:35 in the morning, and while many buildings were damaged, no one was killed. The February 2011 event was an aftershock, only a magnitude 6.3. But its epicenter was within the city’s limits and only a few miles below the surface. The peak ground acceleration packed a force of almost 2 Gs, a motion more violent than that ever experienced in any urban center (or so they told us.)

Only two tall buildings pancaked, but the violence delivered in those 24 seconds smashed the tidy, conservative center city and turned into a place that looked freshly carpet-bombed. In large sections, solid ground also turned into a sticky goo that sank cars, trees, buildings. It resolidified into something that gripped with the strength of concrete what it had ingested. Quake City documents these changes well. Most mesmerizing were the filmed first-hand stories recounted by a cross-section of citizens. Watching their faces, listening to their words, the quake felt as real to me as anything apart from living memory.

But the funny thing is, if Steve and I hadn’t read and heard what we did, we wouldn’t have suspected what had happened less than 9 years ago. We walked miles and miles through a city that’s tidy again. We noted many empty lots and many buildings that are fenced off, or braced, in obvious need of repairs. 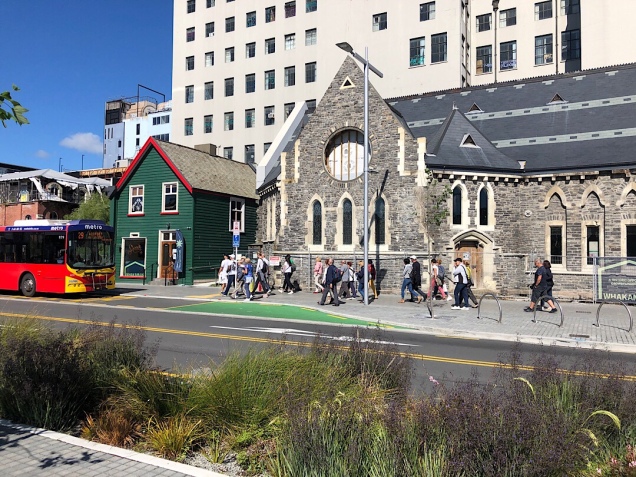 The stone cathedral that was Christchurch’s great landmark still bears gaping holes where the bell tower and some of the walls fell. 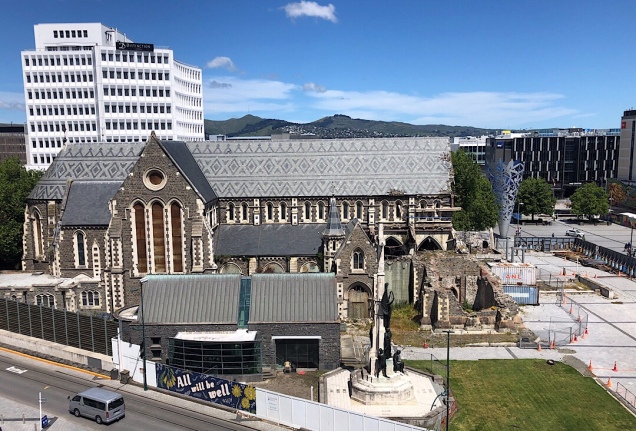 But there are urban centers in America’s rust belt that look worse. And few cities anywhere have mounted the kind of makeover that’s underway here.

Christchurch is now an urban planner’s paradise. The planners have made sweeping godlike decisions. They’ve decreed that the new city center should be low-rise and surrounded by a belt of green space; that it will be divided into a few discrete “districts” — one for retail, one for entertainment, others for government and safety services, residences, and a few other designations. Tens of billions of dollars have been spent or budgeted to make this a reality. The Kiwis have repaired a vast array of unseen infrastructure (underground water pipes, etc.) and they’ve built some stunning public facilities:

They’ve re-engineered the river that winds through the center or town, landscaping it and creating lovely pathways. 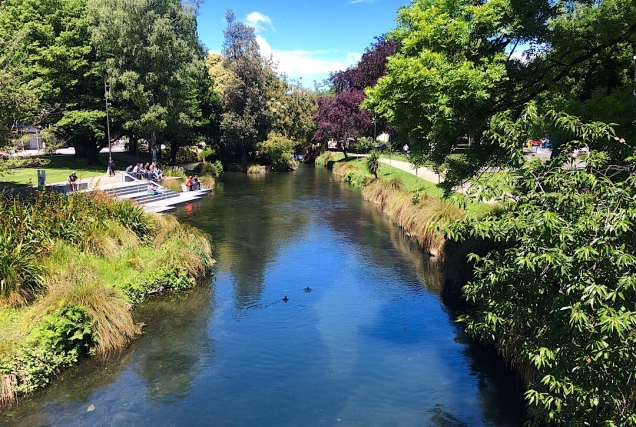 There’s much more to come, including rebuilding the cathedral, finishing the zoomy convention center that’s supposed to start operating next year… 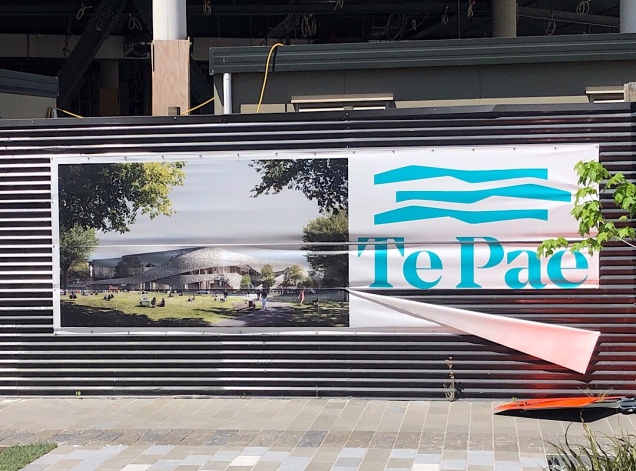 …and building a deluxe sports complex…

As this has gone on, intriguing temporary creations have sprung up to fill the voids. A temporary Anglican cathedral was built from cardboard tubes… 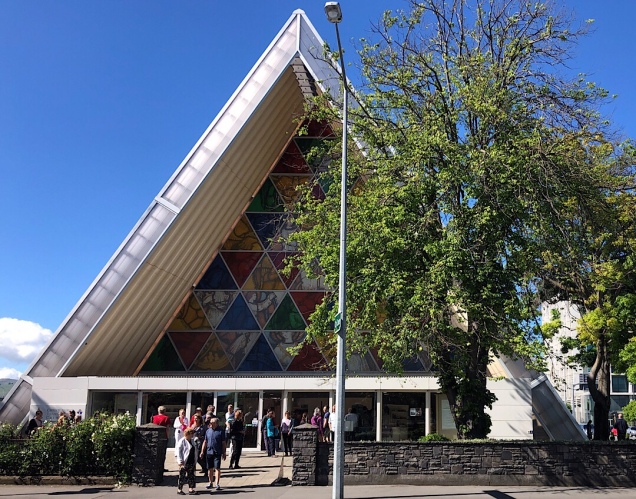 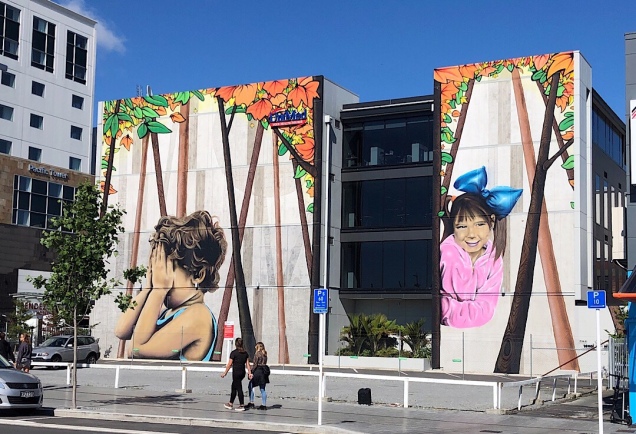 … and create other works to fill the civic gaps.

This all makes central Christchurch a fascinating place to stroll through — at least during the day. At night, Steve and I found most streets in and adjoining the central city to be eerily empty. Our Airbnb flat was just a few blocks outside the center, but the nearest supermarket was well over a mile away (in the CBD’s “Retail District”). I love packed, jumbled, textured cities like Tokyo and Rome and New York; the hyper-orderliness of Christchurch made me uneasy.

Over time will it be balanced, somehow, mellowed out by the other changes that have occurred here? More than one resident testified to a profound transformation in the residents. They used to dress drably, one woman recounted. “It was almost as if they couldn’t be bothered to look nice,” she said. But in the aftermath of the destruction, people grew noticeably more stylish. The artsy vibe today is unmistakable. Another guy commented that before the quakes, the city was a bastion of white complacency. But the quakes vaporized social barriers; made outsiders welcome. “Then we had the murders at the mosque last spring,” he said. “Before, I think a lot of people would have said, ‘That’s too bad, but it’s the Muslim’s problem.’ Instead, when it happened, within hours people from every strata of society were streaming there to help out. It was an attack on all of us.”

There’s so much of the world we haven’t seen, Steve and rarely return to many places. But I’d love to pop into Christchurch in 20 years to see what becomes of it.