We still have eight more days in India, but I already know what has shocked us most: the retail shopping experience. We’ve been in few countries where so much of the commerce consists of tiny storefronts offering only one category of product. Last May, in the middle of the Amazon, we found a modern grocery store in the small town of Santarem (Brazil). But the only time we managed to find anything vaguely similar here was in Jaipur. Then, when we told our guesthouse operator we wanted a grocery store, we had to hire a taxi to drive us to one because it was too far to walk.

The dearth of general stores — even tiny ones — at times has been maddening. I think of our first night in Mumbai (formerly Bombay), last Tuesday. We’d picked up some vodka and wanted to have a drink in our room before venturing out in search of dinner. You can mix vodka with many liquids; our favorite is Schweppes tonic water or orange juice. People describe Mumbai as the New York City of India, and our hotel was in the Fort district (“a dining and shopping epicenter,” in Lonely Planet’s words.) How hard could it be to find a bottle of mix?

REALLY hard, it turns out! Steve and I tromped through street after street, all of them jam-packed with shops. We found places selling stationery-related products, snuff, laundry detergent, photocopying service, cell-phone covers, clothes, tailoring services, and much more I can’t remember. We passed eateries of all sorts, from nice restaurants to cheap Chinese food outlets to countless varieties of street food. But nowhere did we find tonic or even a boxed juice. We must have searched for at least 20 minutes before finally spying a bottle of sugary orange soda for sale. Grouchy and dissatisfied, we gave in, bought a bottle of that, and returned to the hotel to pour a stiff one.

I don’t want anyone who reads this to think no American-style grocery stores exist in India. We’ve seen photos online of glitzy shopping malls that look indistinguishable from the nicest in San Diego.

We’ve also seen plenty of expensive looking stores selling Nike shoes and Coach bags and Zara products like this, even on very decrepit streets. I’m sure there must be grocery stores near the the fancy malls. But Steve and I haven’t been staying in wealthy enclaves in major metropolitan suburbs, but rather in staggeringly dense city centers. We started to wonder if there were no grocery stores around our hotels because the Indian government had outlawed them for some insane reason.

That does not appear to be the case. We got some inkling of the true explanation in Udaipur. The day after we took Shashi’s cooking class, we ran into one of the British couples who’d been our classmates and joined them at a coffee shop. The guy, another Steve, was an engineering manager who’d been living in Bombay for 5 years, while his partner, Allison, spent part of her time with him and part back in England. We had a long delightful conversation, during which we asked about the mysteriously missing grocery stories. They reflected for a moment, then suggested there were a couple of factors.

Very poor people probably paid a few rupees less to buy their fruits, vegetables, and milk products from the vendors who brought those products in from the country and sold them on the sidewalk than they would pay at any grocery store. Also, grocery stores weren’t a part of the culture of the Indian poor.

“But there are plenty of middle-class people in India now, aren’t there?” I interjected.

This was true, Alison and Steve agreed. But the reality was that middle- and upper-class Indians could have their servants go out and buy anything they needed. Toothpaste? Toilet paper? A can of tonic water? Send out Rahul, or call the store for takeout service. Bombay Steve told us about opening the door of his apartment one recent day to find a guy bearing a cup of Starbuck’s coffee. (He’d wound up at the wrong apartment.) Most middle- or upper-class Indians would find it beneath their dignity to dash off to a grocery store, Alison and Steve said, adding that in fairness, some felt they were providing needed jobs to their fellows by using their delivery services.

I felt a little staggered to realize I was in a place with such vast numbers of extremely poor people that their existence made grocery stores uneconomical. The absence of the grocery stores didn’t mean you couldn’t get anything you might want. It meant other people would go out and find it and bring it to you if you paid them little more than pennies.

They didn’t need to go to a grocery store to find whatever you wanted because they knew what the various scattered sources were. The importance of such local knowledge was driven home to us our second morning in Bombay. We left the hotel early, before the city felt like quite such a steam bath and walked past the fantastic Victorian-era train station. Here’s what a small part of it looks like:

Just north of it begins a series of neighborhoods renowned for their maze-like bazaars. As it turned out, it was too early for many of the shops to be open, but we did pass guys carrying big tubs of fish on their heads

and others selling them from tarps on the sidewalk.

We passed trucks of suffering and doomed chickens that made me (briefly) consider never eating chicken again.

was just coming to life, and within it, I spotted a booth carrying all manner of canned drinks, including our beloved Schweppes (in both Indian and foreign sizes.) Steve was ecstatic. He bought six (Indian) cans from this guy.

Later that morning, we took an Uber car to another nearby train station (Churchgate). I’d read that the famous dabba-wallahs of Mumbai could be found gathering there every day in the late morning. These guys pick up lunchboxes from restaurants and private homes (where ladies earn some money by cooking tasty lunch items and packing them into tins for their customers) and they fan out across the city around noon to deliver them to office workers. I’d seen a charming movie (The Lunchbox) a few years ago about one such guy, and our guidebook also talked about them. (The sidebar claimed that more than 200,000 meals were delivered daily, and a 2002 Forbes Magazine analysis “found that the dabba-wallahs had…a 99.999999% reliability rating.”)

At our hotel we heard that the dabba-wallahs were in decline; corporate canteens were increasingly putting them out of business. I still wanted to try to find some, but at the train station all we saw was this lonely trio.

Had we gotten there too late? Were dabba-wallahs as endangered as those Rajasthani camels? I felt a wave of disappointment.

We strolled aimlessly up a prosperous residential boulevard and then down a big commercial street. We popped into a non-self-service pharmacy (where everything for sale is behind counters manned with white-robed clerks) and found the sunscreen/moisturizer I’d been needing. I was too embarrassed to ask those guys if they sold pantiliners (one of my secrets to life on the road with just a few pairs of underwear), but Steve barged into the next pharmacy and emerged moments later with an 88-rupee package of Carefree liners.

Continuing on, we came upon a cluster of men I thought were selling purses or insulated bags. But Steve exclaimed, “It’s them! It’s the lunch guys!”

It was indeed a thick congregation of dabbah-wallahs, loading up their conveyances. I hadn’t immediately recognized them because they were using so many insulated bags instead of the traditional tin canisters. Some had dozens of the lunch bags piled up on wooden hand carts…

…while others stood by bicycles hung with motley receptacles.

The face of the modern dabba-wallah.

They milled about for a few minutes, then dispersed to make their deliveries. 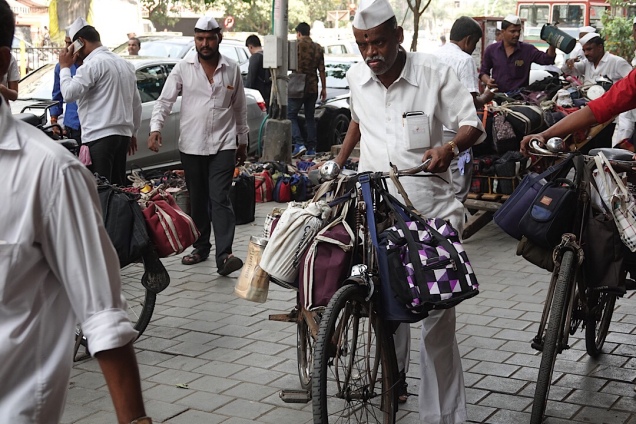 We almost missed them because we didn’t know where to look or even exactly what we were looking for. I think more than a few things in India are like that.

4 thoughts on “Shopping in India”