Now I know the secret to seeing a tiger in Ranthambore National Park. Go in May or June, the peak of the dry season. Many of the trees in the park lose their leaves; streams dry up; waterholes shrink. With the undergrowth reduced and the tigers’ drinking sources limited, 90% of safari-goers encounter the animal superstars. The only problem: temperatures at this time of year typically are 110 to 120 degrees.

When we visited the park earlier this week, it was cold at dawn, particularly when we were racing through Sawai Madhopur (the town that adjoins the park) in a open-top 4WD vehicle that carried Steve and me, four Indian tourists, a guide, and a driver.

Our crew that morning, minus the guide, who took this photo.

Even under the heavy blankets provided by our hotel, I shivered. It didn’t take long to enter the park, though, and soon Steve and I were too distracted by the landscape to be bothered by the chill. 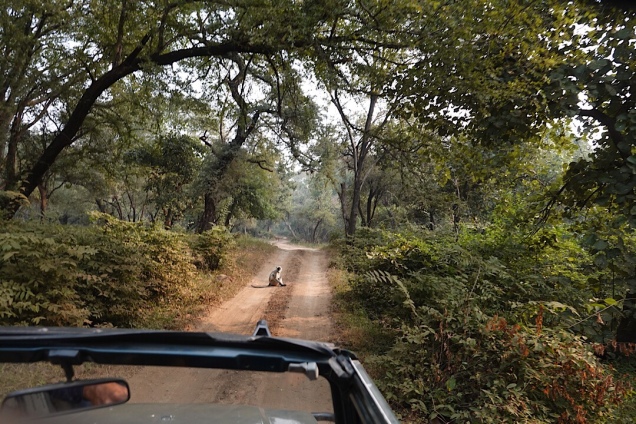 This was India, home to 1.2 billion humans, yet it felt like a less crowded place, say, a (smoggy) forest in Idaho after heavy rains that had made everything lush and green. At times the vegetation pressed in so close we had to duck to avoid being scratched in the face by branches. We passed marshland… 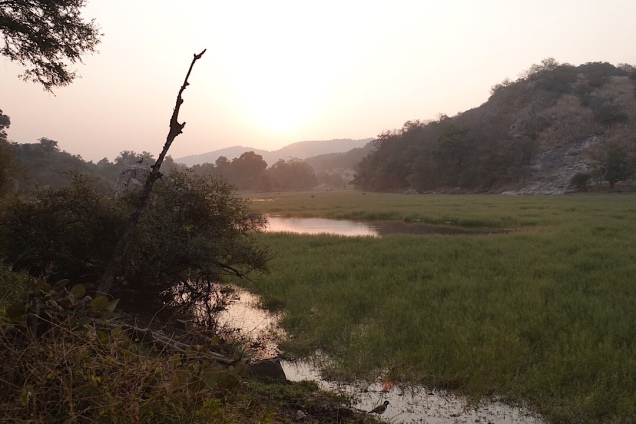 …and stands of banyan trees that took our breath away. 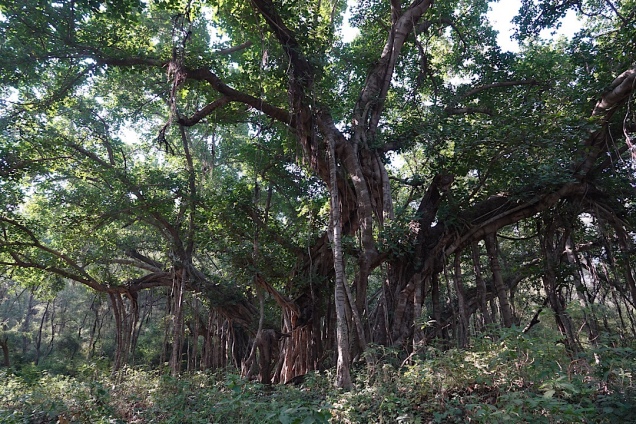 Here and there, we glimpsed the 1000-year-old fort that topped a distant cliff top. (Later we read that the wall surrounding it is almost 5 miles long.)

We saw few other vehicles but many types of animals, many of them amazingly tame:

Nilgai (a type of Indian antelope). 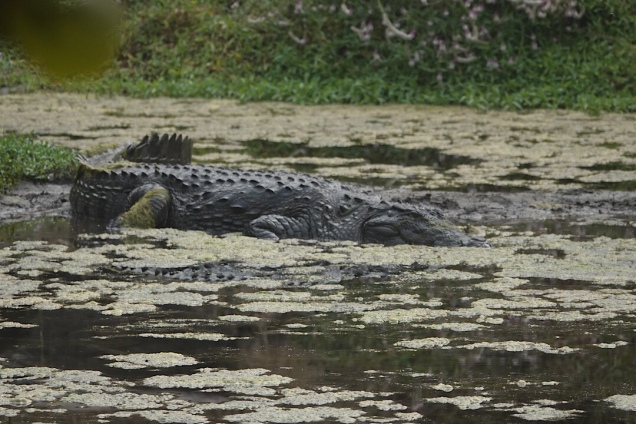 A cormorant drying his wings in the sun. 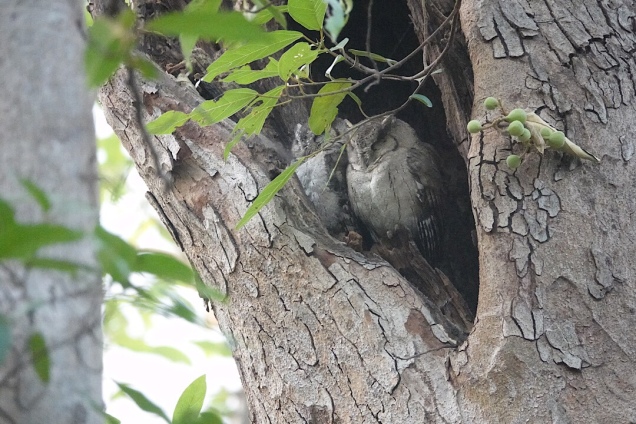 Owls snoozing in a tree hole. 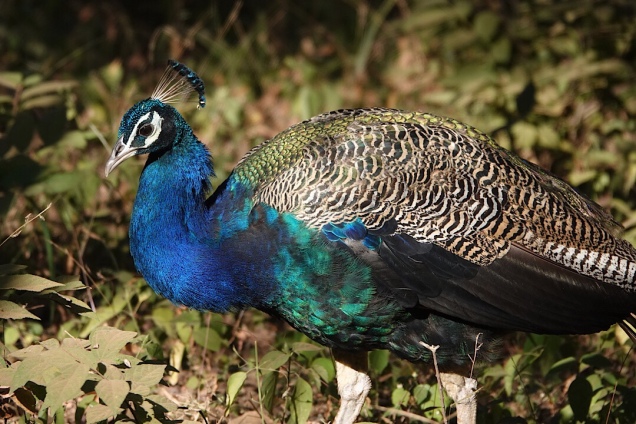 So many peacock they reminded us of seagulls in San Diego. 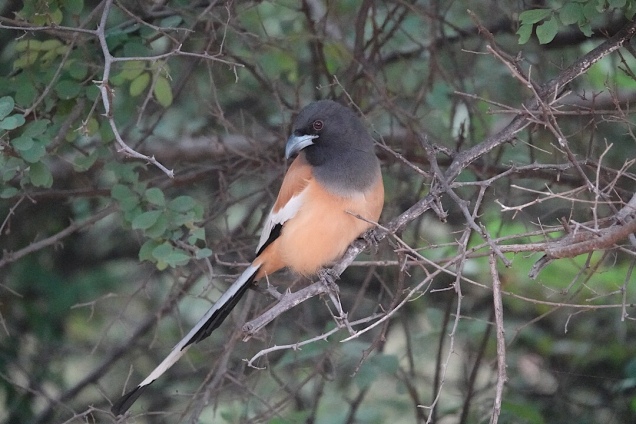 This guy is known as the dentist of the jungle. Guides told us that they all but climb into the tigers’ mouths, cleaning their teeth, a mutually beneficial service that the tigers tolerate.

Tigers are the maharajahs in this part of the touristic world. Guides promise solemnly they will do their best to find them. I whispered to Steve that they probably get bigger tips when they succeed, but it also feels like there’s more involved. The guides may lack guns, but they act like hunters, keen and fiercely competitive with the other guides; maybe with the tigers, too.

The landscapes and other animals were reward enough for Steve and me. We saw fresh tiger tracks, so it was clear the big cats were near, but when we left the park that morning without having seen any, we shrugged. Only 20 percent of safari-goers at this time of year ever get lucky, we’d been told.

We departed on a second safari just hours after the first, and three of our companions in the jeep were the same as from the morning: a charming mom and dad from Kolkata, on safari with their only son. He is a conservation biologist who as it turned out had studied tiger populations at a couple of other parks. We had a different guide for this second outing. Dark and grizzled, he seemed even more obsessed with scoring a tiger sighting for us than the morning guide had been. 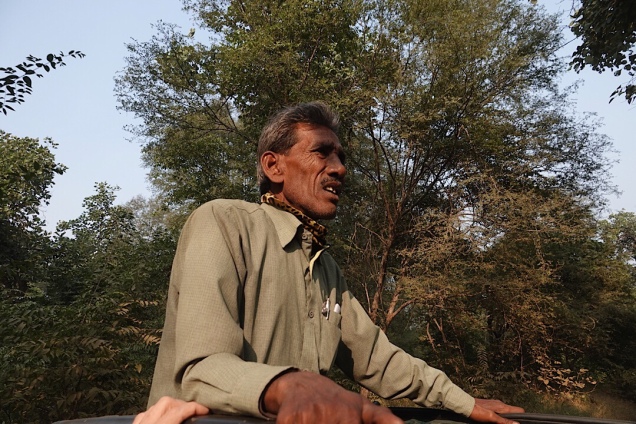 We all but ignored all the other animals we passed. We searched one area after another. With the sun getting closer to the horizon, we waited on a high ridge overlooking a canyon; listened to the birds. Saw no tigers.

The light was fading, and we were heading to the park exit when we came upon two other jeeps stopped on a heavily forested section of road. They had spotted a tiger, one of their guides told ours with excitement. Our guide grew almost frantic, scanning the brush, directing the driver to position the vehicle so we could see it too.

“Back!” He barked in Hindi. “Back, back, back BACK!” I aimed my new Sony with its marvelous zoom lens. This is what I got:

So now I know a second way to see a tiger in India: get lucky.

Steve and I had one final outing scheduled for our final morning in Sawai Madhopur. We’d expected to be placed in the same vehicle as the charming Indian family, but the assignments are random, and instead we set out with an older South African couple and two young Germans. Once again our guide was obsessed with finding us a tiger, and this morning we again struck out. Later that day, however, I got an email from Arghya, the young Indian conservation biologist. (I’d send him my photo from the previous afternoon.) “Today we got 2 child male and one adult,” he wrote. “The two male babies were just within 2 or 3 ft from the car.” He sent several photos, including these: 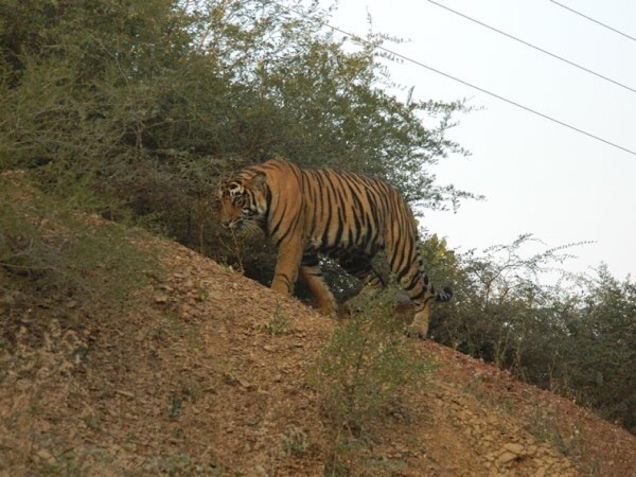 Later he wrote me again, declaring (among other things) that “Nature is our mother..every part of it is her important organs..every large and small components of bio and abiotic diversity.” Some animals were so attractive people came from all over the world to see them, he noted. “Our idea is: make these attractive things the flagships and just draw attention of everyone to the other interesting parts as well.” Arghya was studying for the exam required to work in India’s central administrative service of wildlife and nature. He wanted to devote his life to helping Mother Nature recover.