From San Diego, I booked berths on an air-conditioned third-class sleeper train that was scheduled to leave Varanasi around 6 pm Wednesday and arrive in Khajuraho shortly before dawn the next day. But in a moment of true enlightenment (it came upon our arrival in Varanasi, when we stopped for some mysterious reason and then didn’t move for two hours even though our train was just outside the station), we realized we would probably loathe the 12-plus-hour night train. Amazingly, the next day we were able to book seats on a 32-minute flight on Jet Air, cancel our night train tickets, and even get a refund (about $14) for the tickets we didn’t use.

The flight was flawless: almost empty, on time, and we even got a little sandwich and water during our brief minutes aloft. Khajuraho has a new airport terminal that makes San Diego’s looks shabby, but we didn’t spend much time in it. By 2 pm we were at our hotel. We spent that afternoon relaxing, and at 8:30 the next morning, we set off with a guide arranged by the hotel.

With him, we took a tuk-tuk to the most important cluster of temples, what’s known as the Western Group. This is a vast compound covered with emerald lawns and huge old trees. 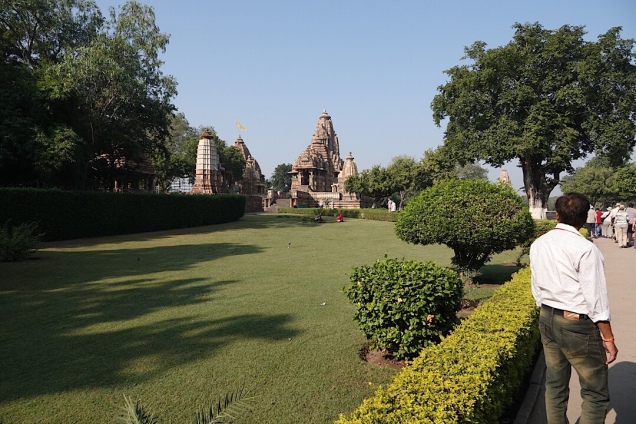 Set among them are about a dozen structures. The area is breathtaking; even at a distance, it ranks among the greatest ceremonial sites Steve and I have visited: Angkor Wat, Machu Picchu, Teotihuacan. 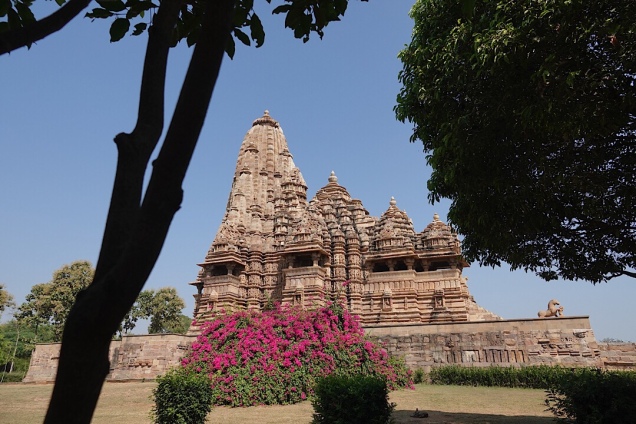 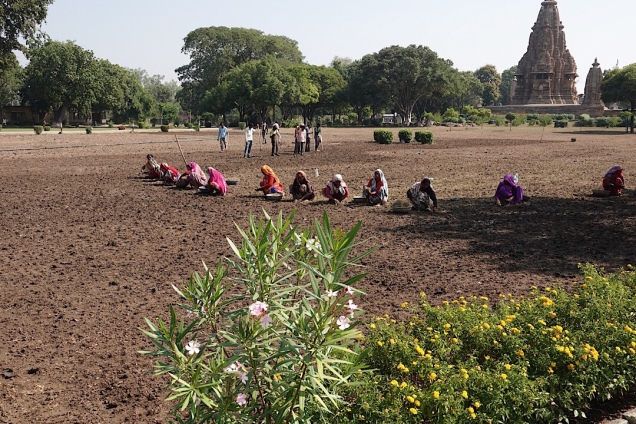 These ladies were replanting the lawn with individual seeds.

Up close, it was even more amazing. Stone carvings cover almost every square foot of the thousand-year-old buildings and their interiors.

This is a huge sandstone wild boar– the third incarnation of the god, Shiva.

And this is some of what’s carved into his side. 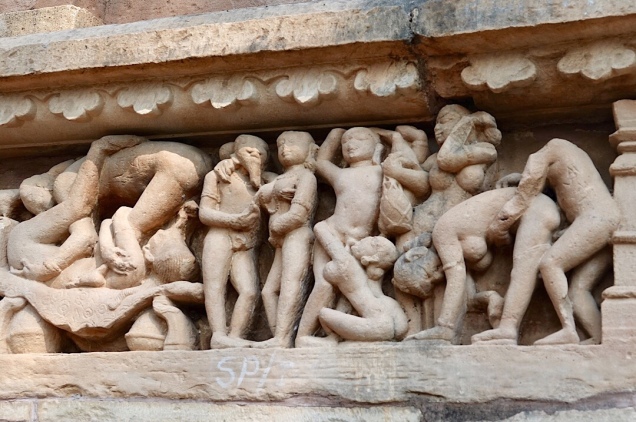 …but it feels like every other aspect of human life is also captured. Soldiers slaughter each other with the aid of war elephants. A famous carving depicts a young woman applying her eye make-up.

Another girl extracts a thorn from her foot: 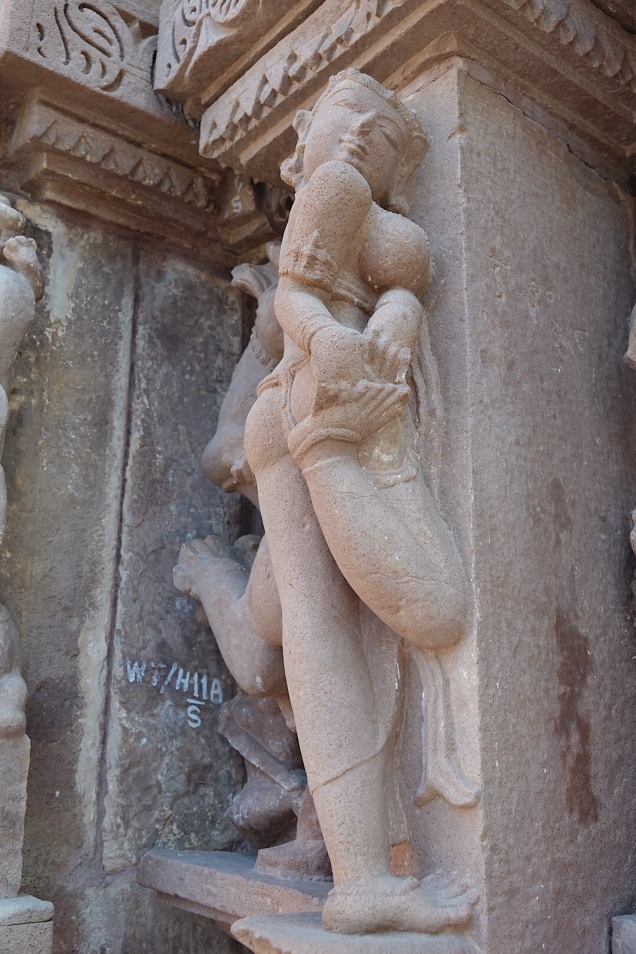 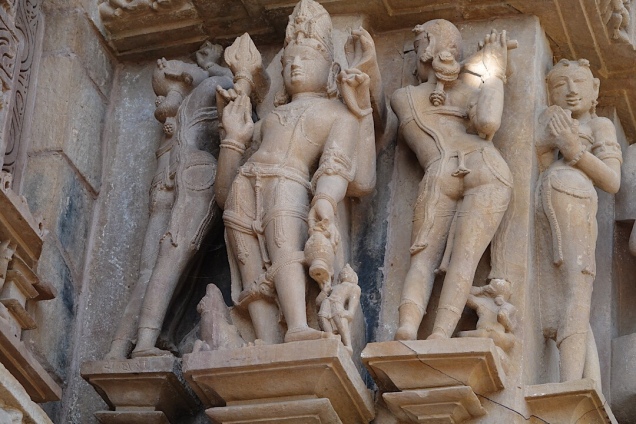 The carvers’ sense of humor is obvious. In one of the most infamous scenes, a man is fornicating with a horse, while two men on each side await their turn. A third covers his eyes in disgust at the barbarism — except that the carver makes it clear he’s peeking. 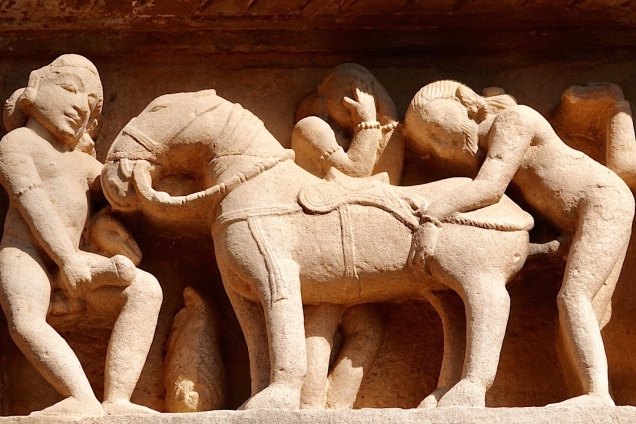 The elephant looks like he’s got a sense of humor too.

It’s splendid, brimming with life and motion. After about 90 minutes, Steve was so overwhelmed he yearned to wander through the whole site again, to better absorb it. But I wanted to visit the Jain temple compound on the other side of town, so I headed there with Karana, the guide.

Jainism is an alternative to Hinduism that began in the 6th Century BC. It rejects the idea of castes and preaches that liberation can be achieved by purifying the soul. The most important way of doing that is through non-violence. In an amazing stroke of luck for us, Khajuraho had been hosting a four-month-long Jain festival (that will wrap up this coming week). The compound grounds were jammed with Jains from all over the country, including some of the holiest men in all of India.

Some of the Jain monks never wear clothes. Like this one. Outside of the four-month-long monsoon season, where they congregate in some location (e.g. Khajuraho this year), the Jain monks wander naked through the countryside, praying and preaching and meditating.

One of their only possessions is the brush they carry to sweep insects out of their path to avoiding injuring them.

Steve and I saw even more temples the next day, though none as marvelous as those in the Western group. In the morning, we rented bicycles and pedaled through the town and countryside. If it weren’t for the smog, which seemed worse than that in Kolkata, the area would be lovely.

The city isn’t crowded, and there’s little traffic, so it feels quiet. A few temples are located in the surrounding farmland, and we cycled past folks drawing water from a well….

..and kids swimming and bathing in a local stream.

We pedaled through a village where a woman was slamming handfuls of cow dung on the facade of her house (home maintenance? We weren’t sure.) 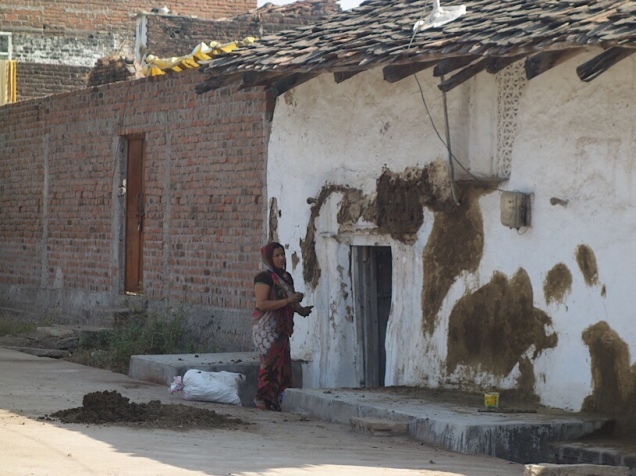 I think it’s the only glimpse we’ll get of rural life in the heart of India. I’ll probably remember it as clearly as the riotous, naughty temple stone tapestry. But we’ve left it behind us now. I’m writing this on a train heading for the heart of Indian tourism. With luck, I’ll post it from our home stay in Agra, about a ten-minute walk from the Taj Mahal.

5 thoughts on “The sexiest stones in the world”