Based on books I can no longer remember, I had a mental picture of the Indian “hill stations,” towns like Simla and Darjeeling in the Himalayan foothills where 18th-century Brits planted tea and officers of the Raj escaped the staggering summer heat of the lowlands. In my mind, these towns were cool and pleasant places, set in rolling hills that might look a bit like Kentucky. I wanted to get a taste of them. Now, having just spent three days in Darjeeling, I can report that my picture was so wrong. I’d forgotten that the foothills of the Himalayas make the Appalachians look like sand dunes. We have no mountains in North America like this.

Three years ago, Steve and I spent some time in Bhutan. That’s what the Indian hill country constantly reminded me of. There are differences, of course. Bhutan is a clean and orderly little kingdom, while the far northern reaches of India, so near to Bhutan and Nepal as the crow flies, are suffocating in smog, carpeted by garbage, deafened by incessant, ubiquitous car-honking. We found all that in Darjeeling. Yet with daytime highs in the low-60s and temperatures plunging to the 40s at night, clinging to vertiginous emerald mountainsides, the “hill” towns felt almost unimaginably different from Kolkata or the Sundarbans. Or Kentucky.

One thing our eco village in the Sundarbans and Darjeeling have in common is that neither are easy to reach. Darjeeling has no airport, and no normal train travels to it. Most tourists get there riding in cars or vans or jeeps. The other alternative is what people call the “toy train,” aka the Darjeeling Himalayan Railway. Built in 1880 and designated a UNESCO World Heritage Site in 1999, our Lonely Planet guidebook included it among the area’s highlights. Steve and I don’t consider ourselves rail fanatics, but we have a soft spot for trains. So even though we knew it supposedly took 7 hours to cover 53 miles, we booked tickets.

We began to suspect this was a mistake shortly after getting to the New Jalpaiguri train station, a madhouse of confusing activity. After some difficulty, we found our way to the unmistakable toy train track; it’s only two feet wide. But at 8 am, we found no sign of the train itself, scheduled to leave at 8:30. 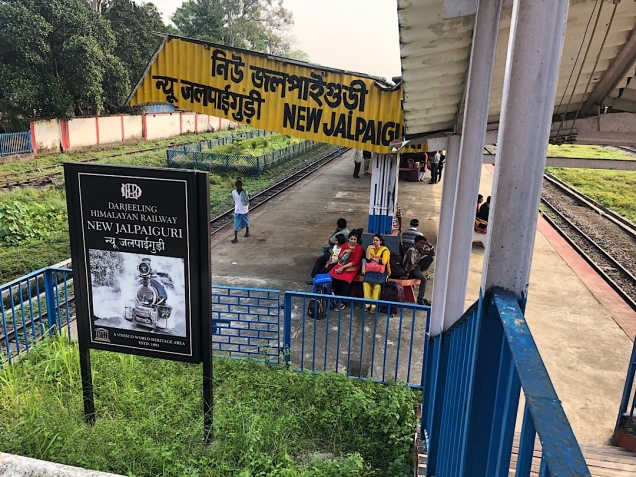 There was no sign of it at 8:30 or 9. Only about 9:10 did this contraption — call it an older brother of the kiddy train that operates next to the San Diego Zoo — chug into the station.

Pandemonium ensued as befuddled passengers (us chief among them) tried to figure out where to sit. Rail attendants seemed to be non-existent. But someone finally directed us to places in the “First Class” car, and around 9:30, we were off.

By the time we departed, every seat was full.

We were off for about 10 minutes, then we stopped for a while in the middle of a field. When we started up again, we traveled for only 20 minutes, then stopped again under an underpass. We sat there for almost an hour. By the time we reached our first scheduled stop, we were almost two hours behind schedule. It didn’t get much better.

I will allow that the toy train has a few things going for it. After a few hours, we were chugging through tea plantations…

… then beautiful green forests filled with enormous trees or moving along the edge of jaw-dropping precipices. 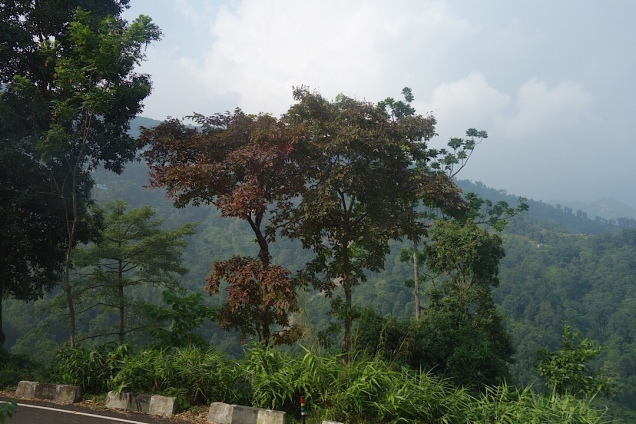 The train has big windows you can open wide, so at times it felt like we were hiking through those landscapes. It’s an engineering marvel, climbing from under 500 feet above sea level to more than 7000 in less than 50 miles. To accomplish this, it does some fancy tricks that include occasionally backing up and switching onto another track on a higher level. It also cuts across the paved (auto) road often, which is entertaining. 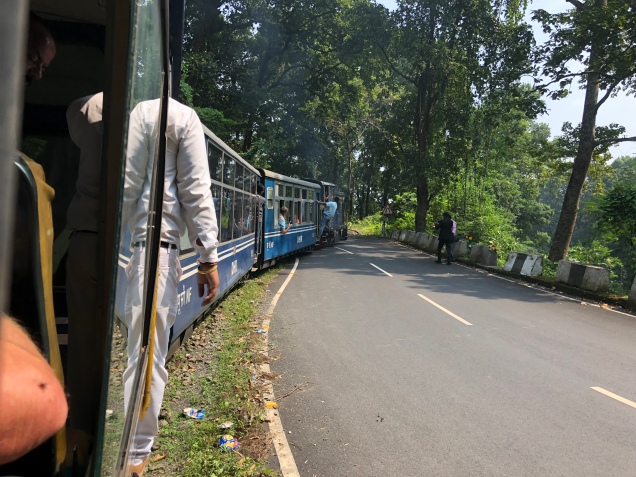 But by 3:30, our scheduled arrival time, when we were clearly hours from Darjeeling, stuck in a jolting hell overseen by workers who clearly did not care a whit what time got there, with only a hole in a tiny compartment to pee in, and only potato chips for lunch, we were pretty miserable.

We finally arrived three hours late, after more than 9 hours of torture, finally reached our hotel, and I can tell you: a good dinner and a shower and a comfy bed quickly erases the memory of a difficult transit. Over the next two days, I even came to appreciate Darjeeling. It was touristy (jammed with Indians gathered in the town for yet another holiday). They were in high spirits. They dressed up in traditional costumes for photo opportunities… 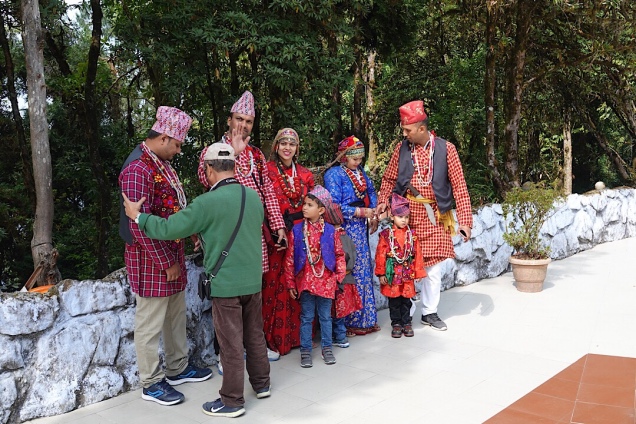 They captured images of their kids enjoying pony rides. They shopped for pashminas and visited the ancient Buddhist temple that adjoined our hotel. 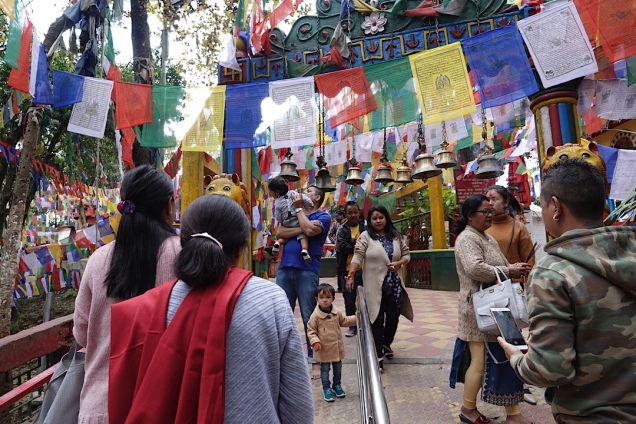 Some of them did what we did the second day: hiked about a mile to the excellent local zoo (specializing in Himalayan animals). The zoo grounds also contain the marvelous Himalayan Mountaineering Institute. 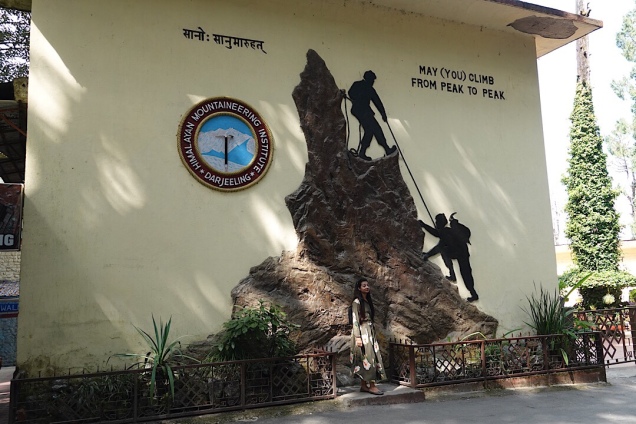 It trains aspiring peak-conquerers and also venerates the memory of past heroes, like Tenzin Norgay, who guided Sir Edmund Hillary to the first conquest of Mt. Everest.

The museum displays some of the great sherpa’s gear from that historic climb.

It also helped that we were staying in a living museum — the sort of place I never normally would seek out. Built in the 1840s as a boarding house for young British officers, the Windamere Hotel, as it’s known today, later catered to the cream of British tea-planter society.

Happily, we were upgraded to a suite, the very one in which a young American student of Asia named Hope Cooke was staying in 1959 when she met and fell in love with the Prince of Sikkim, later marrying him and becoming queen.

All the facilities today are a bit creaky, but where else have I ever been served five-course meals by white-gloved waters (and coffee kept warm under a knitted cozy)…

… or warmed in the evening with a wood fire and genuine hot-water bottles? It felt like time travel, and it was a lot less rigorous than all those hours in locomotive hell.

5 thoughts on “They call these hills?”