I have another entry for my short list of the Worst Places in the World to Live. It only includes places where I’ve actually slept. (Otherwise it would be longer.) Up to now it has included two locations: the Tibetan plateau and the altiplano of Peru and Bolivia, both cursed with oxygen-poor altitudes, bad food, cold and wind and skin-cracking dryness. Joining their company now in my sour estimation is the Sundarbans, where Steve and I journeyed last Thursday. 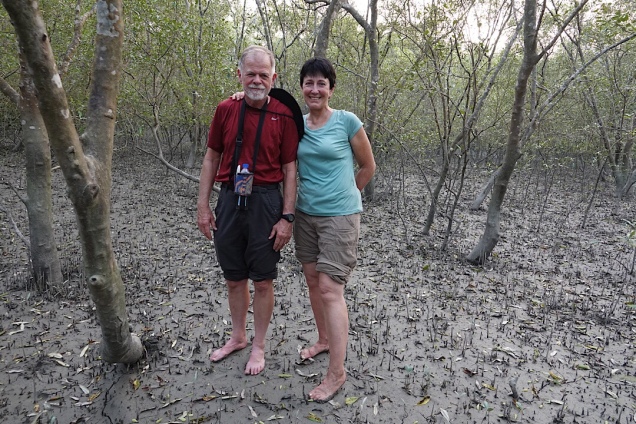 We didn’t go there to suffer. Rather, we wanted to see one of the geographic wonders of the world. The Sundarbans is the enormous estuary where some of India’s biggest rivers — the Ganges, the Brahmaputra, and others — split into dozens of branches and flow into the Bay of Bengal. The area includes both an Indian and a Bangladeshi section. What grows there, mainly, are mangroves, the shrub which somehow learned to suck up seawater and excrete the salt. The Sundarbans mangrove forest is the biggest on earth. More than 80 species grow so densely you can’t see more then a few feet into them, and they shoot up stick-like “air roots” that can impale anything that steps on them. Despite that, a number of creatures survive in this harsh environment, the most famous being the Royal Bengal tiger.

On the Indian side, at least 100 of the big cats prowl an area a little smaller than San Diego County. Except for mothers and their cubs, they live alone, hunting spotted deer and wild boar and more than a few humans. Around 70 people perish in their jaws every year, we were told, mostly luckless fishermen and honey-collectors from the local villages. Companies that take tourists here play up this creepy record.

Steve and I and an eccentric old Israeli guy were the only non-Indians in our excursion group. I found the three-hour ride from Kolkata to the end of the highway fascinating, if terrifying, as we avoided by inches head-on collisions with oncoming buses, trucks, cars, bulldozers, motorcycles, bicyclists, dogs, meandering cows, pedestrians, motorcycle-powered carts loaded with goods and humans, and flocks of lambs.

The road wasn’t horrible. We slowed more often for speed bumps than potholes. But the bouncy, uneven ride, the constant swerving and accelerating, the incessant horn-blowing wearied me.

After the van ride, we had to trudge in blistering heat through a couple of villages and take two ferries before arriving at the island “eco-village” created by our outfitter (Backpackers de Sundarbans).

The village may be poor and backward, but the Indian ladies still dress sharply.

As mud-walled cabins go, ours wasn’t bad. It had lots of hooks on which to hang things and a private marble-floored bathroom. There was electricity to charge our phones, and if the lights were weak, the ceiling fan whirled vigorously, alleviating the heat and humidity.

That afternoon we hiked through the eco-village…

…where you can find unexpected beauty.

Then we clambered into oversized canoes for a sunset paddle into one of the narrow channels through the mangroves.

I felt serene, until one of the Indian civil engineers emitted a piercing shriek. I look in the direction where she was staring, petrified, and yelped too. Tarantulas appeared to be climbing up the tree trunks, just inches away from our vessel.

When I learned they were tree-climbing crabs, not giant spiders, that calmed me, but the young Indian woman and one of her colleagues generated lots of hilarity with their unrestrained crabophobia. It was a highlight of the day along with our foray after dinner to the village moonshiner to taste his rice wine. (Revolting, with strong sour buttermilk notes.)

I barely slept that night. Our bed was rock hard, and roosters crowed long before dawn. I’d found a three-inch-wide spider (no crab this time) in our bathroom, and when a staff member came to relocate it, it had disappeared. 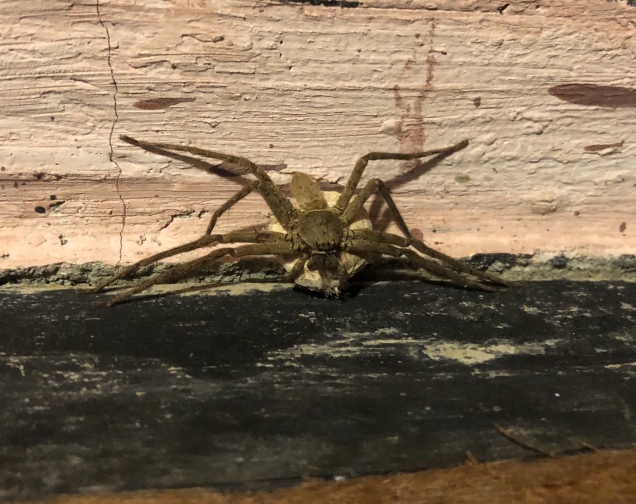 Where DID he go?

Although our bed had a decent mosquito net, I kept thinking of the tree vipers and other extravagantly venomous snakes that call the Sundarbans home. The next day brought more physical hardship after we all boarded a much bigger motorboat, chugged to the tiger reserve office to get permission to enter, and picked up another guide. Parts of our river rambles reminded Steve and me of our recent Amazon River adventure. But whereas the skies there enthralled us, the murky Indian air reminded us of Los Angeles in the 50s. Before noon everything I was wearing was soaked with sweat. Mangroves may be interesting, but their charm fades when they’re the only thing to look at for hour after hour.

Animal spottings jolted us awake, though. These included:

Macaques. We watched this group chase the one guy into the water. They seemed to be mad at him.

This is a yellow fiddler crab. Don’t you love his eyes?

Most menacing was this mature crocodile. Alligators also ply these waters, but it’s the crocs who are murderous, taking down even tigers when they’re swimming from island to island.

Sadly, but not unexpectedly, we didn’t see any tigers. We did spot recent tracks, and from them it was unmistakable the fiercesome man-eaters weren’t far away. 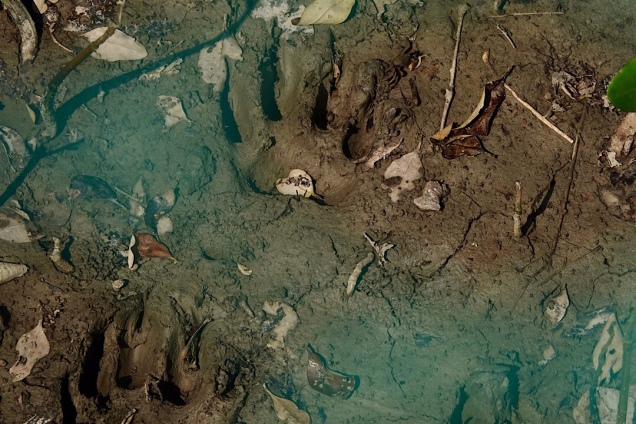 Because of the heat and snakes and air pollution and tigers and disease-laden mosquitoes and inhospitable mangroves and more, I will never move to the tiger’s neighborhood, nor likely ever return. But on balance, we were happy to visit.

10 thoughts on “No country for old gringos”