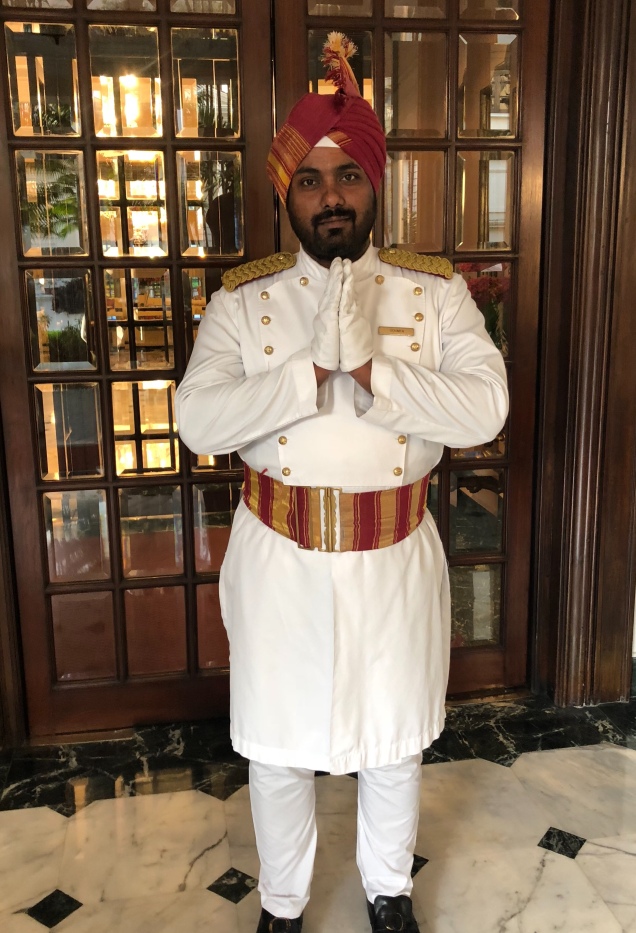 Steve and I are staying at the best hotel I’ve ever experienced. But getting here was one of the tougher trips of my life.

I blame myself. I chose our routing partly because of the excellent price, but also because I thought we would benefit from breaking up the journey. We did relish our stopover in Seoul. But going from there to here was brutal.

We set our alarm Sunday morning for 6, and the plane for Singapore took off at 9. After six and a half hours in the air, we landed and spent six hours in Singapore’s Changi International Airport (rated consistently as the best in the world). We took off again at 9 pm for another three and a half hours aloft. There’s a two-hour time difference between Singapore and Calcutta, so it was only 10:30 pm when we landed, and we got through customs and immigration in just 45 minutes. Then we searched for the “pre-paid taxi” booth I’d read about in Lonely Planet.

The guidebook had made it sound like this was the best choice for getting into town. The municipal police oversee the safety and reliability of the vehicles, which travel from the airport to the center of town for a great price — about $5. Because I’d read about this, when our hotel (the Oberoi Grand) had emailed to ask if I wanted them to arrange for a driver and private car pickup for $60, I had thanked them politely but said we would just take a cab.

Ha! We found what we were looking for easily enough; the airport of India’s second-biggest city was eerily empty, approaching midnight. But we also found a throng of would be passengers more or less lined up before two stalls. Huge lines aren’t terrible if they move fast. But these didn’t appear to be moving at all. 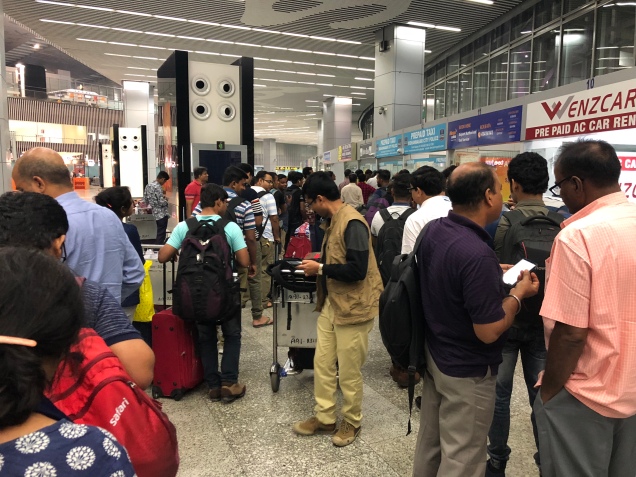 We joined the flow and waited. We waited more. Nothing happened. Steve left a couple of times to search for alternatives, but the computers in the Uber booth were down and the guy in the Ola booth (an Indian competitor to Uber) said we couldn’t use his system without an Indian phone number. Steve found another prepaid taxi line out in front of the terminal. But it didn’t appear to be moving either.

Eventually it became clear we were inching forward, almost imperceptibly, to one of two windows, each manned by a harassed-looking clerk.

We didn’t reach ours until close to 12:30 (3:30 am Seoul time — and god knows what on our body clocks.) Weirdly, it took only a minute for us to pay for our ride (380 rupees or about $5.15), and out in the street, we quickly located the ancient taxi assigned to transport us. I can only guess that the line had moved so glacially because folks in front of us were going to more complicated destinations.

For years I’ve heard terrifying stories about Indian drivers; that they were more insane and reckless even than the seemingly suicidal motorists of Shanghai. Our ride into town confirmed the stereotype. Over and over we careened within inches of other vehicles. But I didn’t care, I felt so desperate to get to the hotel. I had a stabbing pain in my side that I hoped wasn’t appendicitis. (In retrospect, I see it was probably the wages of terrible airplane posture.) I felt so exhausted I wanted to throw up. Unfortunately, after about 10 minutes, we hit heavy traffic and the ride became downright hallucinogenic. We inched through vast crowds of people strolling past displays of colored lights unlike anything I’ve ever seen outside Las Vegas.

Occasionally we passed a floodlit shrine containing what appeared to be a multi-armed goddess.

We finally reached the hotel around 1:30. And as I said, it is a paradise. When we got up the next morning and learned that virtually every tourist attraction in the city would be closed for the whole time we would be here, we didn’t even reel. The city’s normal jewels would be inaccessible, we learned, because something even more wonderful would be going on. Hard as it is to imagine, I can tell you this has proved true.