And to think I didn’t even know the proper pronunciation of açaí (ah-sah-EE) until recently. (I called it uh-KIE or sometimes uh-SIGH.) Now I know what kind of tree açaí grows on — a beautiful palm from the state of Pará (whose capital is Belém). I understand now that the deep purple juice or syrup that’s become so trendy in North America and Europe, renowned for almost mystical health-giving properties, isn’t made from what most of us think of as a fruit, but rather from the paper-thin skin on the seeds that sprout in broom-like clusters from the top of that palm. Açaí trees grow in the jungle, and local folks gather them by shinnying up the tall, skinny trunks, cutting off the seed clusters, and sliding to the ground with them.

The feathery palms are the ones that bear the açaí seeds.

I know this because, suddenly gifted with almost two full days in Belem, Steve and I lined up a day and a half of touring. Our guide was a Belém native named Valdo Ast. Now 53, Valdo was born to very poor parents. He couldn’t afford college but at some point began hankering to learn English. Armed first with language tapes, then with the chutzpah to strike up conversations with English-speaking tourists, he became fluent enough to entertain us and discourse on any topic we brought up: history, politics, world events. (He later also mastered Spanish and French and now is working on his Italian and German.)

Valdo picked us up at our hotel Sunday morning, not long after we disembarked from the Amazon Star. He explained that Portuguese soldiers first established a toehold here in 1616, naming it after the town where Jesus was born (Belém is the Portuguese name for Bethlehem). For more than 200 years, the settlers did little more than export exotic curiosities such as cacao beans and jaguar skins back to Europe, while discouraging French or Dutch adventurers from staking any claims to the place. Then in the late 1800s, rubber brought prosperity, as it did to Manaus. Although vast areas of Belem today consist of squalid, moldy, ruined neighborhoods plagued by rampant crime, the city also has a cultural and architectural legacy that includes several gems.

In Valdo’s tow, we breezed through the lively waterfront produce and fish market, visited the fort and its museum, popped into the massive cathedral and a basilica that every year draws more than a million worshippers from all over the country. My favorite stop was the city’s zoo and horticultural preserve. Shy giant rodents (agoutis) and iguanas roam freely throughout grounds that are as green and densely packed with plant life as the jungle, foliage so tall and abundant it makes the San Diego Zoo looked denuded.

Yesterday (Monday) we ventured out on a final riverine and jungle adventure. A driver took Valdo and us to a marina where we boarded an aluminum skiff. We blasted across the broad Guama River then chugged up narrow channels that looked like cousins to the Louisiana bayou. At last we disembarked and hiked to the property of Mr. Ladir. “He’s 84,” Valdo told us. “But every time I ask how old he is, he says 74, 75.” A family member had enlightened the guide about the old man’s true birth date.

Like so much of our time in the Amazon, our visit with Mr. Ladir was grubby but riveting. A little shy and clad only in a pair of thin, sagging old shorts, our host seemed welcoming, but his wife sat on the porch of their hut, looking forlorn. According to Valdo, she’s completely blind and can no longer walk; the old man does everything for her.

For us he picked up something that looked like a rusty cannonball — a true Brazil nut.

They’re almost as lethal as cannonballs when they drop from the gigantic trees every winter and spring. In those seasons, Valdo told us, visitors must wear hard hats. Mr. Ladir hacked at one with a small machete. It took some work, but eventually he split it open… 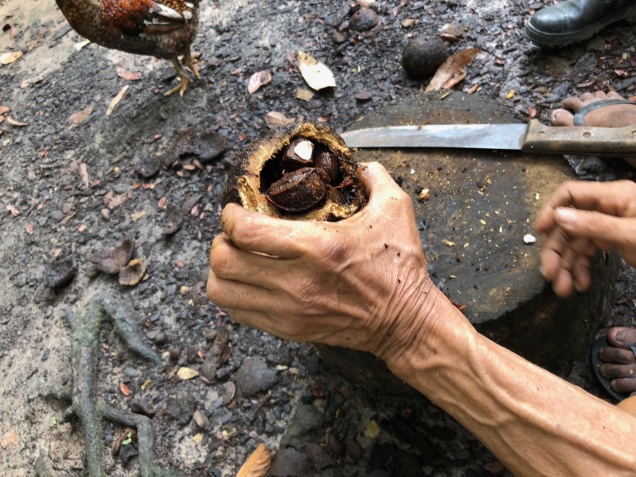 …and dug out a dozen or so seeds. (What we gringos think of as Brazil nuts actually are just the seeds of one.) Mr. Ladir washed them… 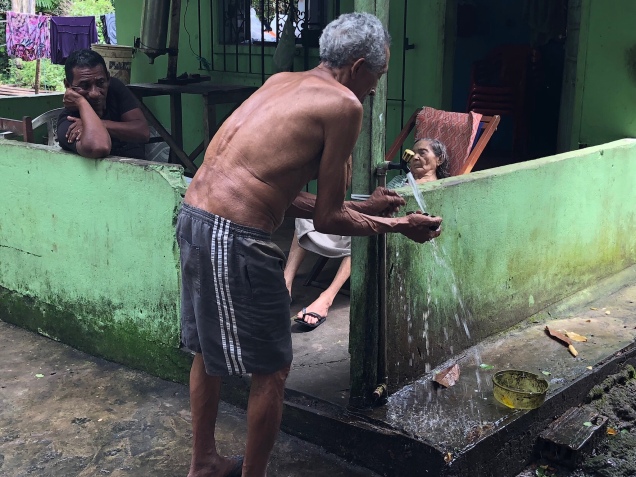 …then used his blade to peel off their tough outer coverings. The meat had a flavor and texture that reminded me a little of fresh coconut, softer and more moist than any Brazil nut I’ve ever bought in a store. I wasn’t the only one who loved them. A pair of resident mangrove parrots (Amazonia amazonicus) choose to live in Mr. Ladir’s compound. The female hopped on a stick extended by our guide and seemed to enjoying inspecting us, then she accepted a Brazil nut/seed from me and shared it with her mate. 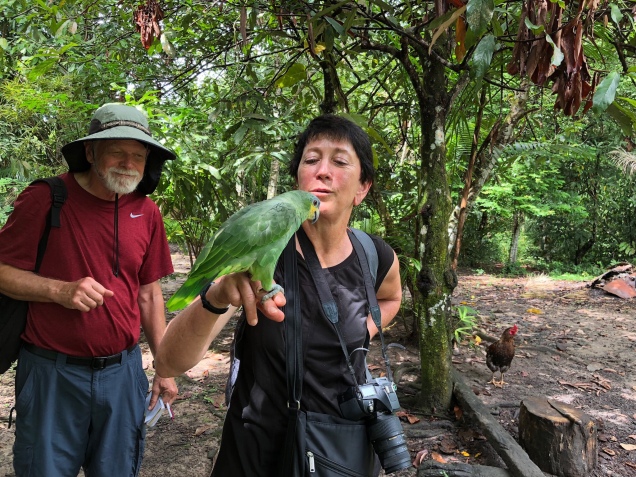 After a while, Valdo led us on a hike to visit more jungle wonders. He split open a fat, ripe cacao pod, and we sucked on the sweet juicy pulp encasing the cacao beans.

He scored a rubber tree and we watched the cut swell with, then bleed snow-white latex. We admired one gigantic tree after another, prized for its fruit or wood or sheer beauty.

Finally we wound up in a space where açaí trees clustered, more of a clearing than most of the country we’d been hiking through. When the açaí trees get old and their seed production plummets, people cut them down to harvest their tender upper sections — the source of what English speakers call hearts of palm. Mr. Ladir appeared and quickly fashioned a rig made of vines that he slipped around his ankles. He shinnied up the tree, agile as a telephone lineman wearing climbing spikes. When he had reached a height of maybe 25 feet, he reached over to an adjoining tree and swung his skinny body onto it, showing off.

I shot a video of this. When I get back to San Diego, I will add it. The octogenarian’s strength and skill almost have to be seen to be believed. Now, however, I’m writing this on an airplane, en route from Belem to Rio. It’s possible we’ll have lightning-fast Internet in the Marvelous City. Somehow I doubt it. Also, we will be engrossed with wonders and dangers that may make the jungle look tame in comparison: terrifying drivers and Sugarloaf Mountain and warring drug gangs and Ipanema Beach and now an unfolding national crisis. Truck drivers all over Brazil have been on strike for a week. We’re hearing calls for the Brazilian military to remove President Temer and take over. I’m not expecting to have a lot of time to devote to techno-troubleshooting.

2 thoughts on “The fruits of Bethlehem”