We were wrong about hammocks! When we tried our friend’s last year, we spent only a minute or two in it, climbed out, and concluded we could never get any rest in one. But on our second afternoon on the Monteiro, we strung up the one we bought in Leticia, and I committed myself to a longer confinement. I had slept badly our first night in the “suite,” not because there was anything wrong with its bed. Rather, my imagination plagued me with blood-curdling thoughts of what would happen if the Monteiro were to capsize in this trackless wilderness. So by the afternoon of the next day, I was drowsy, and I found that I could wriggle into several different positions in the hammock — all of which were comfy! 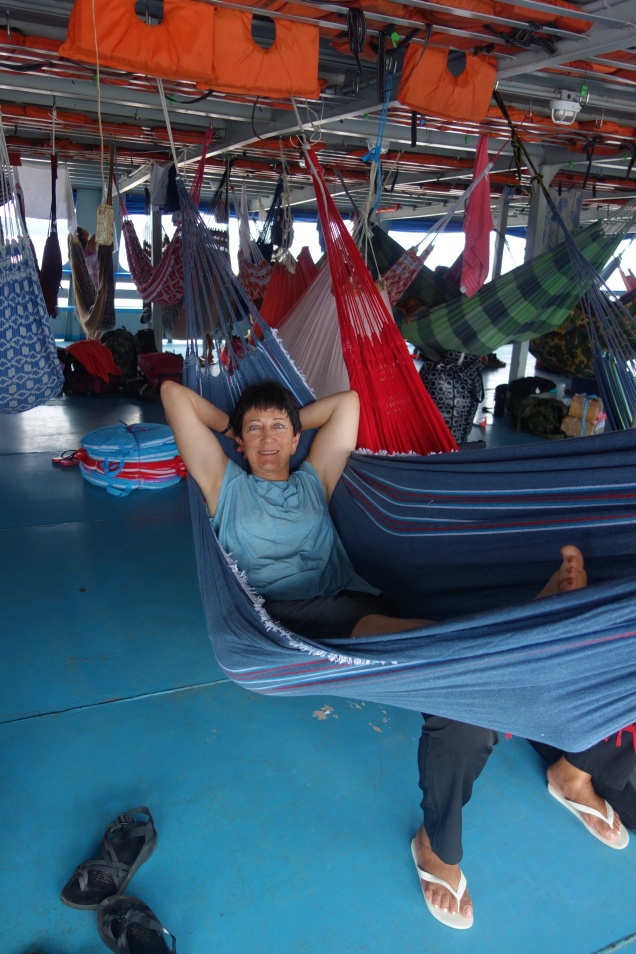 I dozed but didn’t quite sleep, pleased by the glimpses of the river beyond the ship’s railings; amused by the lively salsa lessons being given by a skinny Colombian guy to the two curvaceous redheads who had the hammocks to my left. I felt more awake after a while and found I could hoist myself up almost upright, supporting my back with my little inflatable pillow. I read for a while, felt lazy and dozed some more, and began to imagine how I could spend a day or two this way. Steve insisted he didn’t want to try it, but I finally persuaded him, and when I returned a half-hour later, he sheepishly confessed that he had napped.

We spent more time with our fellow traveler, Jen, last night at dinner. Upon boarding, she set up her hammock in the thick of the crowd on the second-level deck. After 24 hours, she’d learned enough to discourse to us about hammock life. She’d concluded that her cheap one was inferior to those of the natives. Rough to the touch, it was much smaller than her neighbors’. With a big enough hammock, one could stretch out at an angle, she’d observed, achieving something close to horizontality. Families tied their hammocks next to each other, creating a pendant microvillage. But even with her inferior rig and unfamiliarity with hammock customs, Jen claimed to have slept well both nights.

It makes Steve and me think that if necessary, we could tolerate sleeping in hammocks on the second of our upcoming boat journeys, the one bound for Manaus. We had hoped to secure tickets for another cabin immediately after disembarking from the Monteiro. We had thought we knew what that disembarcation would entail. We had no clue.

Our plan had been to take the ship from Tabatinga to Alvaraes, the closest village to the Mamiraua Sustainable Development Reserve. Lonely Planet describes this reserve as Brazil’s largest section of a unique forest ecosystem (the varzea) defined by seasonal flooding by sediment-rich “white water” rivers.It was said to offer visitors “pristine rainforest, abundant animal life, and fairly easy access.” It seemed worth seeing. Via email, we had reserved a room in a lodge in the reserve for two nights, and Choca, the owner, had promised to pick us up in Alvaraes in his speedboat.

In Tabatinga, we had bought passage to Alvaraes. “ALVARAES” was clearly written on our ticket. But what I knew — ONLY because I had read about it in a blog — was that the slow boats don’t stop at Alvaraes. I’d read about one unfortunate couple who didn’t realize this until well after their ship had steamed beyond the town. They hadn’t informed the captain they wanted to be dropped off, so their predicament was their fault, according to the crew, and couldn’t be reversed.

Wanting to avoid a similar fate, I had started telling various ship’s personnel on Wednesday that we would need to be let off the next day at Alvaraes. Each one seemed a little surprised to hear this, but each indicated we could do it. In the end I probably told a half-dozen folks, including the captain and pilot in the wheelhouse, where I barged in this morning. The times when everyone predicted we would arrive conflicted — but we’ve grown jaded about that. More surprising was the news that we would get to Alvaraes by taking a “lanche” from the Monteiro.

We assumed our informants were talking about the long, narrow, motorized wooden boat hanging off the back of the ship.

Steve had pointed it out to me, joking that I needn’t worry about the Monteiro sinking because the captain would just lower it, get in, and putt-putt off to find someone to rescue us.

By noon on Thursday, it seemed clear we must be approaching Alvaraes. Jen’s maps.me map showed the town, and when Steve and I descended to the lowest deck, a strapping Brazilian guy soon joined us. “Are you going to Alvaraes too?” I asked him in Portuguese. He assented, which reassured me that the riverboat wasn’t about to pass the town without stopping.

But no one made any move to lower the launch from the back of the riverboat. Instead, two scruffy guys driving even scruffier looking crafts approached from the land. Aha! We realized THESE were the means by which we would get to shore.

That’s when things got ugly. The burly Brazilian elbowed his way to where the boat’s railing had been opened. He hefted a huge sack crammed with Brazil nuts down into the bobbing motorized canoe which was about 5 feet below our feet. With aggressive determination, he grabbed another huge bag, and another, while not one soul made a move to help me and my suitcase and backpack from the deck down into the increasingly overladen little vessel. As it sank lower and lower, my temper flared. Swearing and pushing my way forward, I dropped my suitcase into the boat then descended (backpack and purse strapped to my body). Steve followed, and by the time he took his thwart, the middle of the boat rode just inches above the cafe-au-lait-colored river. (No life preservers added to the load. There were none.) Steve shot the following photo, testimony to the fact that at least our adventure amused many of the Monteiro’s passengers.

Here’s what the view from our craft looked like: 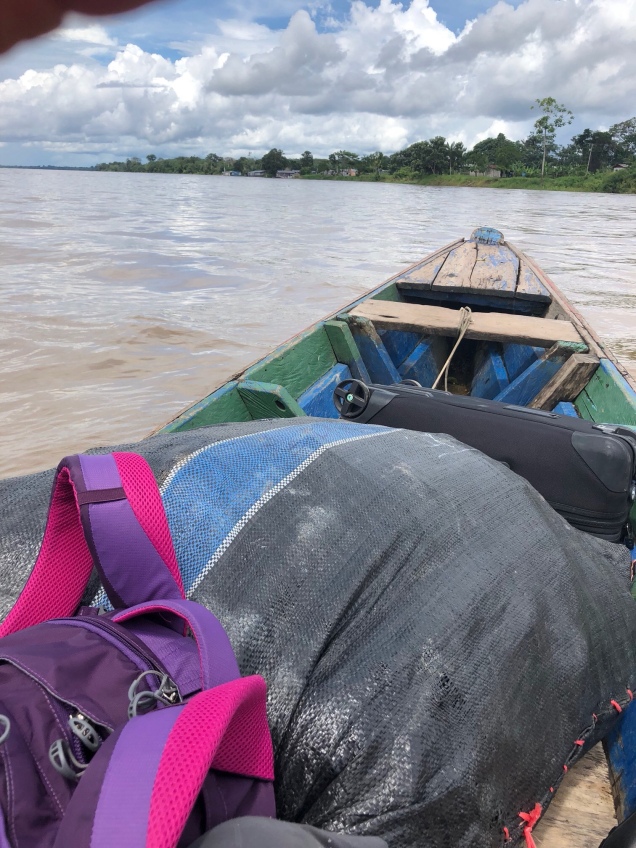 Jen shot video during the most comedic moments and sent me a clip. Although I don’t usually try to insert video, I will give this a shot (and fix it at home if it’s unviewable now.)

In this fashion, we zoomed toward the town and arrived about 5 minutes later, where Choca awaited. So it all turned out fine, except we were too rattled to press Choca to help us buy our onward tickets. We hope to accomplish this soon. In the meantime, we’re in one of the strangest places we’ve ever visited. We expect to see a lot more of it tomorrow.

2 thoughts on “Into the hammock and off the boat”