For four species of giant sea turtles, Oman’s relatively unpopulated tropical beaches are special; mother turtles use them to lay their eggs. At the very easternmost point of the Arabian Peninsula, the Omani government has created a preserve called Ras al Jinz to help the babies survive their perilous journey to the water after they hatch. I read about this place and thought it would be cool to visit — until I learned that high season for the egg-laying and hatching was in the summer — months after we would be passing through. So I didn’t include any reptilian adventures on our itinerary.

Months passed. The more I learned about the challenges involved in getting to the Arabian desert and up Oman’s rough, wild mountain roads, the less I wanted to rent a 4WD vehicle and drive it ourselves. In the end, we decided to hire an outfitter to provide us with a driver/guide (Abdullah) for three days. The itinerary that they proposed included a visit to Ras al Jinz. We shrugged and thought: why not?

On our first afternoon together, I commented to Abdullah that I understood we probably would not see turtles that evening, because it wasn’t the right time of the year for them. But he set me straight. Even though the numbers couldn’t compare with what one would see in the summer, “You are 95% guaranteed to see turtles,” he promised. He explained that we would have two opportunities to see them. Guides would lead guests staying at Ras al Jinz and a limited number of other visitors on a trek to the beach around 8:30 or 9 pm. They would also lead a much smaller group about 5 am. We could do one or both excursions, but in Abdullah’s opinion, the morning outing was the better time — quieter and more peaceful and allowing participants more time to commune with the sea.

Both Steve and I were feeling beat; we crammed an awful lot of sightseeing and driving and swimming into our first day with Abdullah. So we jumped at the chance to opt for the morning turtle foray. We ate dinner at the reserve, climbed in bed by 9:30, and set our alarm for 4:30 am.

Shortly before 5, we joined a small group in the lobby. We set out toward the beach, illuminated only by the wan glow of the coming dawn. 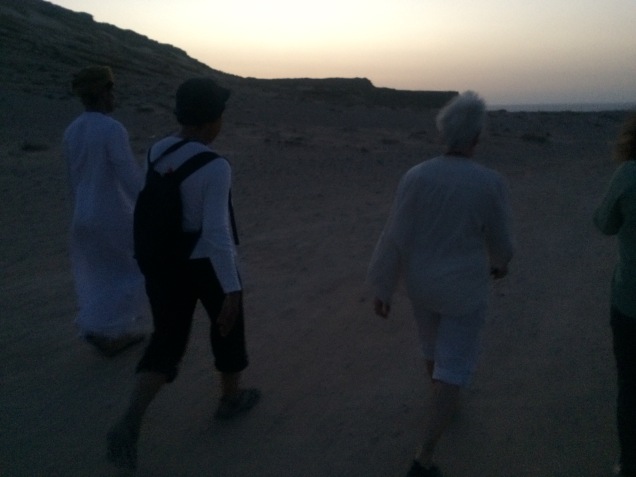 Most of the stars had disappeared, but Venus still gleamed. No one talked. A Goldilocks breeze made me feel just right.
About 30 feet from the surf, our guide instructed us to wait. He would walk up the beach, scanning for egg-laying females, while a fellow guide would search in the other direction. If they found a turtle, they would signal us with their flashlights. We watched our leader grow smaller and smaller as he approached a starkly geometric promontory in the distance. 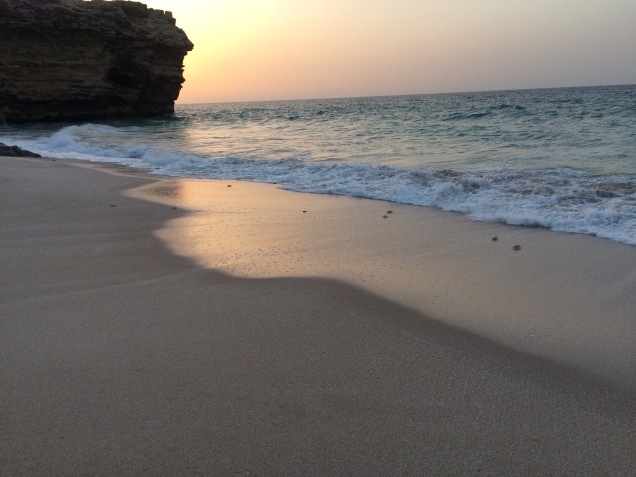 But he found no egg-laying females, nor did his buddy who scanned in the other direction. I felt let down, like we’d blown it. The night group had been able to observe not one but two turtle mothers obeying the urgent imperative of their instincts.
Someone in our group spotted something in the surf zone — giant turtles, copulating. It looked like large dark forms thrashing about. Once in a while, a fin or two could be seen. Everyone watched this for a while, but our guide said the female in such encounters never would come onto the beach immediately. “It will be like three or four days later,” he said. So people started trudging back to the lodge.


Some of us lingered however. Steve and I marveled at the huge tracks left by female turtles who had obviously been there earlier — they looked like they’d been made by small bulldozers. 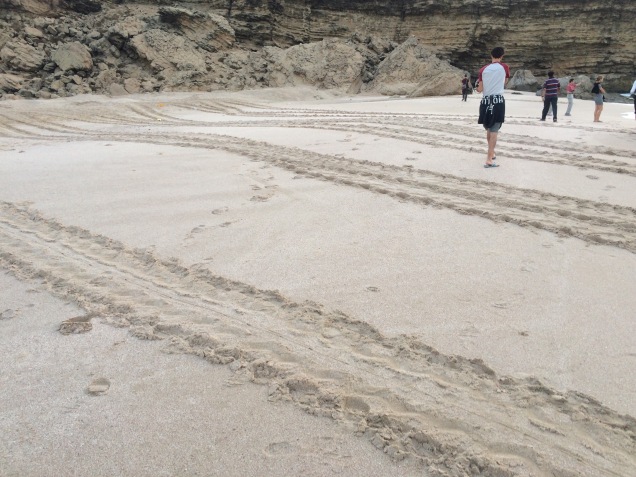 We realized that the depressions dotting the beach had been made by the females. 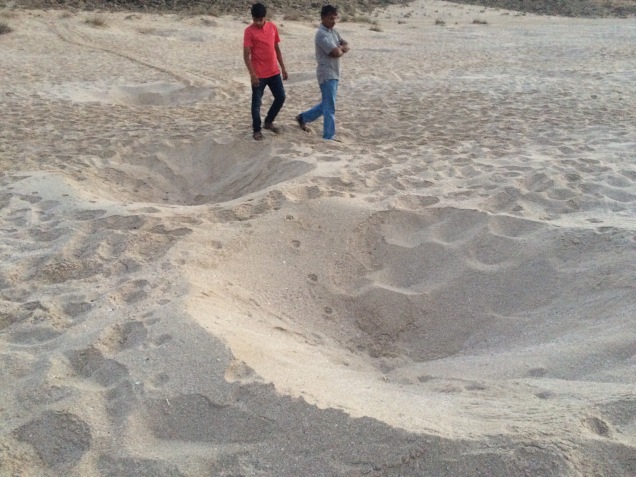 We assumed these pits were the nests. Egg shells the shape and size of golf balls were strewn around them. 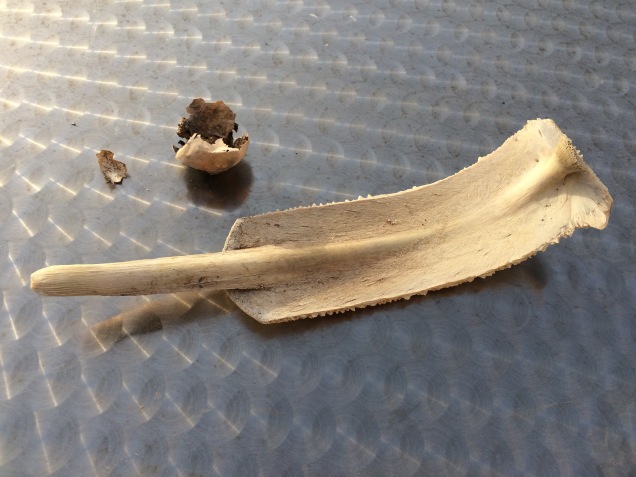 But later we learned that the eggs were actually buried by the huge female turtles about a meter down and away from the depressions, in part to deceive some of the animals that love to eat turtle eggs (including foxes, whose paw tracks we saw in the sand.)

Comical crabs scurried through the waves and played peekaboo in their holes. 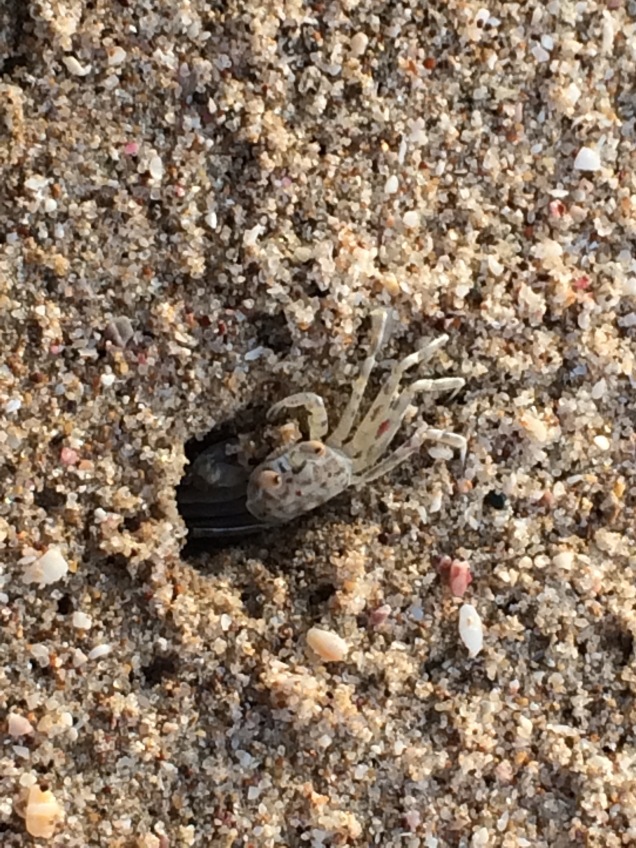 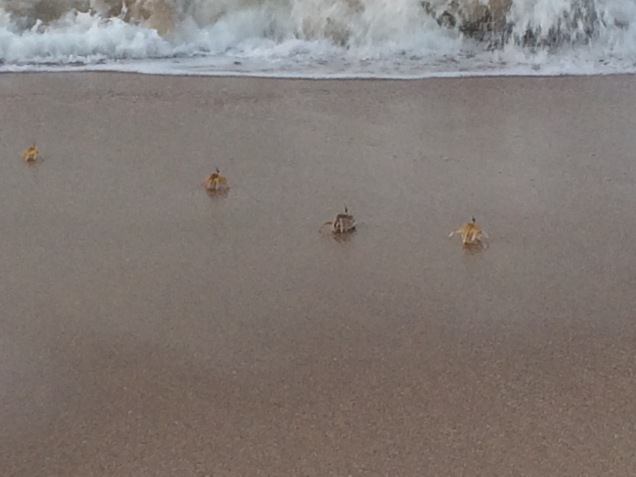 If we’d missed the sight of the mother turtles laboring and delivering their offspring, their presence, after a while, felt very close. As did the babies. Only one sea turtle hatchling in a thousand makes it to maturity, to swim the oceans of the world. The thought of the little ones buried all around me, who soon would each give it their shot, almost tempted to be return to Ras al Jinz in the high season. (Daytime temperatures climb well over 100 then.) 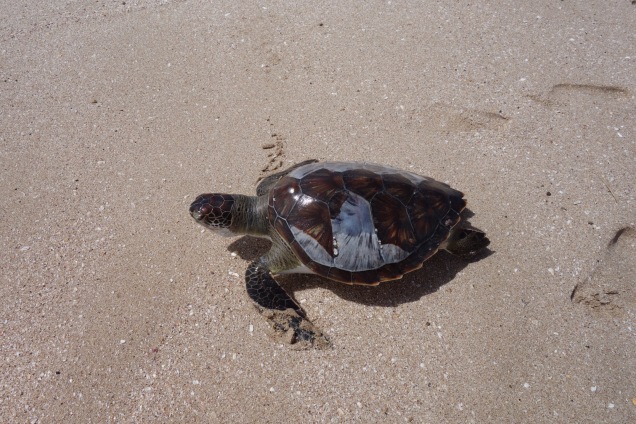