At a recent dinner with friends, the question arose as to what each of us considered to be a relaxing day. I didn’t have much to contribute; I rarely have them. It’s not so much that I’m harried as laden with lists upon lists of things I want to accomplish. Friday, however, my To Do list pretty much solely consisted of one item: cruise an Omani fjord in an Arabian dhow. Accomplishing that turned out to be a world-class way to chill.

A day sail in a dhow (the traditional shallow, wide-beamed vessel in this part of the world) is one of the two main visitor activities in Khasab (the other being the “mountain safari” we did Thursday). When we set out for the dhow harbor around 9:30, yesterday’s fierce winds had disappeared. (Bizarrely, the Saturday ferry remained cancelled. Apparently once the ferry bureaucrats cancel a sailing, even the return of excellent weather does not prompt them to reschedule it.)

These touristic dhows are immensely charming. Although they’re powered by a motor (rather than by old-style sails), patterned rugs cover almost every inch of the deck. Thick, pretty cushions pad the perimeter, a flagrant invitation to lounge, even sprawl. A heavy canvas canopy protects the passengers and crew from the sun (which even at 10 am was blazing.) 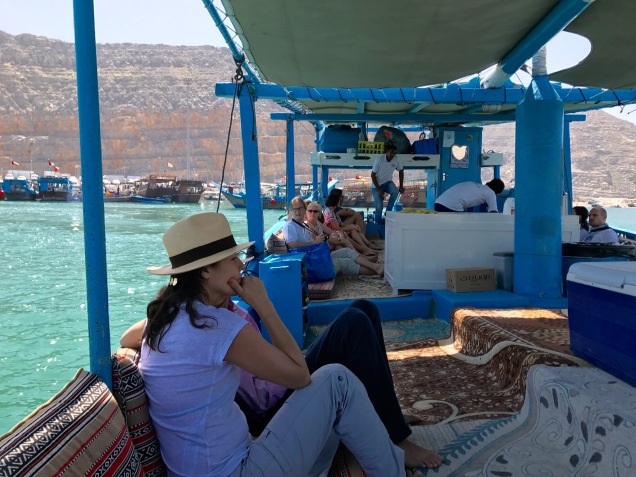 I’ve hinted at the heat in my earlier posts, but it’s difficult to communicate its power to flatten. Highs have been in the low to mid-90s every day since our arrival in Arabia. It’s pretty humid, too, and coupled with the blazing sun, the effect can be staggering. But as soon as our vessel started moving, the breeze and motion made the blast furnace merely balmy.

If we’d been shipwrecked, a la Gilligan, it would have made for an interesting sit-com. The skipper and his assistant were from Bangladesh, and several of the two dozen passengers hailed from India. Others included several Germans, a trio of Czechs, a gal from Japan with a boyfriend from Kyrgyzstan, two Ecuadorians, Steve and me, and an Omani couple who looked like newlyweds (she decked in full black robes and a conservative head scarf, neither of which she ever removed.)

We moved without incident out into the channel, cutting through glittering water shaded royal blue, intense teals and turquoise, emerald green. Every now and then, small speedboats roared past us, likely bearing smugglers bound for the coast of Iran 30 miles away (about a two-hour speedboat ride).

Flocks of cormorants swirled into elaborate formations, rearranging themselves every few seconds into new patterns. 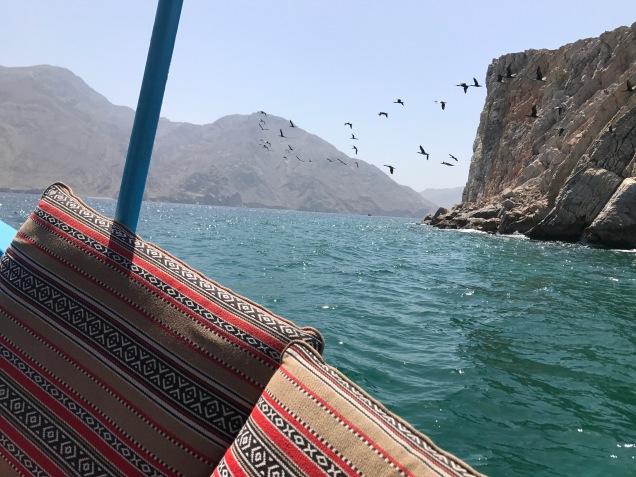 For the first hour or so, everyone scanned for dolphins, and we spotted pod after pod of them. The captain eventually succeeded in luring a small group into surfing our bow wave, and once again I marveled at how much pleasure humans seem to get from close encounters with cetaceans in their element.

Folks have dubbed this tip of the Musandam Peninsula “the Norway of Arabia.” I’ve never sailed the fjords of Scandinavia, but I suspect they’re a whole lot greener and less tortured looking than the towering mountains that line these narrow Omani inlets. So much violence — wracking, canting, smashing — was done to them over the eons. We sailed past a few improbably tiny villages…

… and the island from which the phrase “to be driven around the bend” supposedly was derived (from the days when British sailors were stationed at the telegraph station there and so many went mad from the solitary confinement).

A little before noon, we anchored in a quiet cove, and the crew handed out masks and snorkels. Almost everyone got in the water (except that enshrouded Omani girl). After the shock of first plunge, the water felt just cool enough to be soothing, and our masks revealed dense swarms of various tropical fish, sea urchins, sea hares, manta rays, sea urchins, and coral. I lamented not having an underwater camera, but here’s what the water looked like when you tossed a bit of food overboard:

Speaking of food, the crew set out an ambitious pre-cooked buffet; we finished with sweet spiced tea and cardomon-flavored coffee. Then on we cruised, to more swimming, more flirting with dolphins, lots of lounging. At some point, it all blended for me into a soporific, hypnotic state of complete relaxation. If the topic ever comes up at some future dinner party, I must remember what that felt like.

2 thoughts on “The Norway of Arabia”