Even through my earplugs, through the glass windows and heavy wooden shutters of our hotel room, I could hear the thunderous rain falling Sunday when we woke up in our hotel in George Town on the island of Penang off the northwest coast of Malaysia. It was still pouring when we ate our breakfast around 8 am, and the weather forecast on my phone promised a 50 to 80% chance the downpour would continue throughout the day. As we had only one day in this World Heritage Site city (the one-time capital of all of British Malaysia), we resigned ourselves to venturing forth armed with our umbrellas, raincoats, waterproof sandals, and the determination to ignore any uncomfortable dampness.

Out on the street, the rain brought at least one benefit: lowering the temperature into the high 70s. When we’d ventured out Saturday afternoon after arriving by van from the misty mountains, it had been at least 20 degrees hotter. The intensity of the sun beating down made me reel. In contrast, walking in the hard steady rain surprised me. I hadn’t done it in memory, but it wasn’t bad.

Something else Steve and I haven’t done in a long time is to wander into a strange city with a plan of discovering it only aided by a map and a guidebook. Usually I’m more organized; I could have hired a private guide to tour us around, or joined the food tour that gets good reviews on Trip Advisor. But we also knew that the historic heart of George Town is small enough to cover on foot. Sometimes you just want to poke around and puzzle out a place at your own speed. That’s what was calling to us Sunday.

It paid off. Next to the elaborately British Colonial city hall, we found a “speaker’s corner” deserted in the rain. But in the grassy field next it, we stared at a huge circle of bears, each posed in the identical posture (palms raised high), but uniquely decorated. The field was so flooded we hesitated to make our way to the explanatory sign. Then a Malaysian guy came along and braved the soggy ground, and I followed him to learn that the installation was a salute to international harmony, conceived of by some Berlin artists. There were bears for almost all of the 140-plus countries in the UN, each one painted by artists from its country, to represent their national spirit. I couldn’t resist going further, to see America’s ursine avatar (a bear done up as the Statue of Liberty). I was hooked. Steve at first refused to follow me, declaring that he was afraid there would be leeches in the shallow water. But eventually, he couldn’t resist either.

Moving downward through the alphabet, I had worked my way around to the French bear when I glanced down and noticed something moving in the inch-deep water — long wormy creatures wriggling along at a brisk clip. Leeches?

I thought there was a good chance they were leeches but what a dilemma they presented! I wanted urgently to finish looking at every bear. But I didn’t want any leeches attaching themselves to my vulnerable feet. I finally figured out a way to complete the circuit by walking on the bears’ concrete pedestals.

I can’t say which was my very favorite; so many were charming. But the Moldovan bear gets the prize for humor.

The rest of the day brought other discoveries big and small. The charms of Georgetown hadn’t been all that obvious in the streets around our hotel. Traffic was hellish, and even on our short walk Saturday afternoon, the shoddy condition of the city’s walkways appalled us.

We’d read that the whole place looked decrepit 20 years ago, but it had great history and a big enough stock of striking (if dilapidated) architecture to win the World Heritage Site designation in 2008. Since then, money to spruce it up has poured in.

Today even in the central core, there’s still a roughness to the place; it’s no Brugge or Barcelona. But it has some gems. We’d never anywhere seen anything like the complex created and still owned by the Khoo family, one of the Chinese clans that immigrated to the island in the 1800s. They multiplied and prospered and by the dawn of the 20th century were rich enough to build a temple that reportedly made the gods jealous enough to burn it down. The Khoos shrugged and built a replacement (the one we visited). It’s hard to imagine how its predecessor could have been more ornate and gorgeous.

Even more impressive to Steve and me was a volume on display from the family’s genealogical records. They went back more than 1000 years. 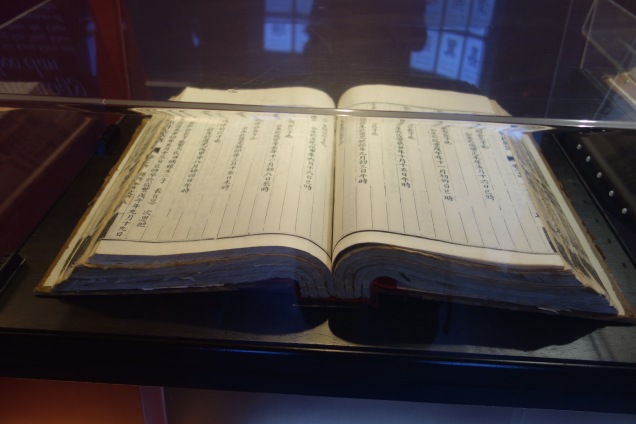 When we got hungry, we walked into a seafood joint in the center of town and asked if they served fried fish. A friendly young woman led us to a table piled high with whole fish and directed us to pick out a good one.

She weighed the red snapper we chose and said it would cost 40 ringgits (about $9.50). A few minutes later, the fish appeared on our table, reincarnated.

Working only with forks and spoons, it didn’t take us long to reduce him to rubble (he was delicious).. 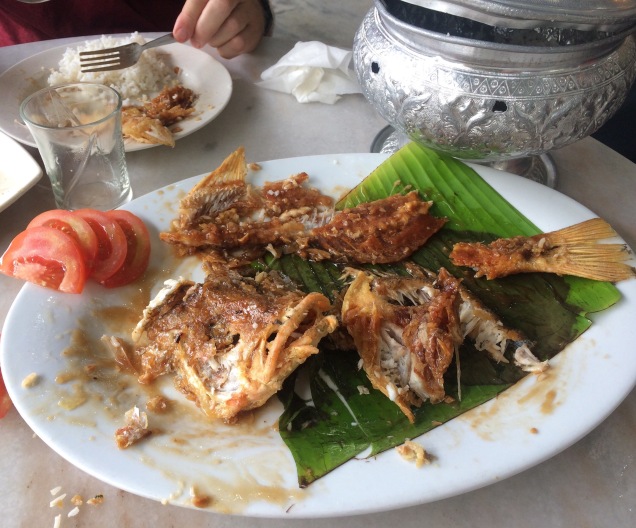 By late afternoon, we were ready to head back to the hotel, but the rain, which had disappeared for a while in the middle of the day, returned with a vengeance. Happily, we were just a block or two away from one of George Town’s many small but intriguing museums. The Upside Down Museum is probably the cheesiest, but I’m a sucker for anything this weird. I wondered whether we’d be disoriented walking from one room to another in which all the visual cues were upside down. Now that we’ve done it, I can report: the answer is no. The main thing visitors experience is being bossed around by young Malaysian employees who tell you how to pose to look the weirdest and then take your picture in room after room. It wasn’t all that interesting. But on the other hand, I now have quite a collection of photos like the following:

More than any of the sights, what the guidebooks rave most about is the food to be had on Penang. To me it felt like a mixed blessing. From our very first meal, it seemed astoundingly good. For lunch Saturday, we walked in the infernal heat to a nearby Chinese family restaurant filled with what appeared to be locals. The fried rice was the best I’ve ever tasted, the rice shot through with subtle flavors and studded with prawns and tender bites of chicken and finely minced vegetables. We ate it with chicken in savory plum sauce, soybean pockets stuffed with prawns and served on crispy noodles that melted into silky smooth strands, and home-made tofu fried and then braised in clay pots along with minced beef and salted fish. Every bite made me swoon, a revelation and so seductive we had to consume almost everything they put before us. (With beer, it came to less than $20). Stuffed as we were, we nonetheless went out for excellent north Indian food Saturday night.

Sunday lunch was that super-fresh fried snapper, and for our final dinner in Malaysia, we walked to a food court just a few blocks from our hotel. It wasn’t as big as some of the places we saw in Singapore, but I couldn’t count all the dishes available. Culinary inventions from Indian and Japan and Korea, a dizzying number of Chinese and Malaysian favorites, even Italian, Mexican, Middle Eastern choices. Our stomachs were only big enough to accommodate three separate dishes plus rice and beer and durian ice cream. To see all those interesting choices but not get to try the vast majority of them felt cruel. For all that’s wonderful about home, there’s no place there where we can eat like they do it Penang. 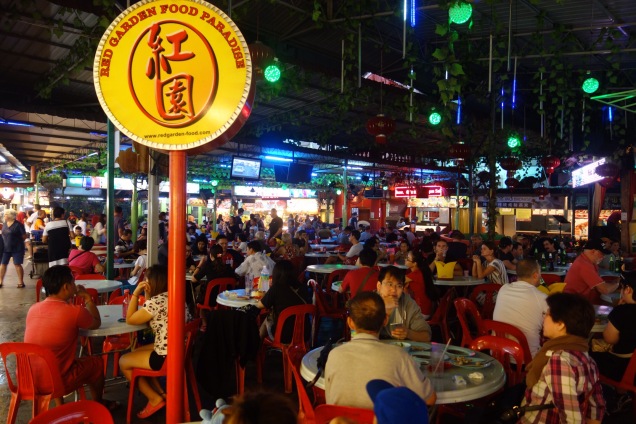