By the end of last week, Steve and I were mulling over whether we should cancel our trip to Nepal. The news we were reading about the informal blockade at the Indian border sounded grim — with literally thousands of trucks stranded, the government banning fuel sales to private cars, and half the water-bottling facilities in the Kathmandu Valley closing because of their inability to operate. Some airlines were canceling their flights because of the lack of jet fuel for their return trips. Under such conditions, I wondered how long it would be before civil unrest broke out. Our worst nightmare was that we would fly in on Saturday, but be unable to get to the airport and depart Monday (October 5).

If there had been any alternative, we might have gone for it. But the Chinese government’s impossibly difficult rules for visiting Tibet gave us no choice. The only place we could pick up our very expensive “group travel visa,” the arrangements for which had been in the works for months, was in Kathmandu. No visa, no Tibet. That simplified things.

Also, our Kathmandu hotel insisted (via email) they would still be able to pick us up at the airport and get us back for the outbound flight. The friend of a San Diego friend, a high-ranking Red Cross official, replied to my worried query that he didn’t think the Nepali government would leave tourists stranded. “There is a lot within walking distance of [your] hotel,” he continued. “If I were gambling person, I’d give you more than a 50% chance of success and a 100% guarantee of more good stories to tell about this journey.” That cheered us up.

This prelude partially explains why we felt almost giddy with happiness over the way things played out. Going through the government formalities upon our arrival Saturday morning at Kathmandu airport (getting a visa, going through immigration, customs, etc.) was complicated but efficient; we didn’t wait in any line for more than a minute or two. We felt a small stab of fear when none of the drivers waiting outside the terminal held a sign with our names.

But our guy showed up soon and loaded our bags into a clean and well-maintained Suburu microvan. The weather was splendid — sunny and warm, and as we drove through the city, traffic was light but by no means non-existent. Motorbikes, vans, taxis, and other private cars sped alongside us. We noted some signs of damage that may have been caused by the two monster earthquakes that slammed Nepal in April and May, but the parts we drove through didn’t look flattened — far from it. Soon we reached Thamel, the tourist district where our hotel is located, where again, vehicular traffic was light. The buildings lining the narrow streets, however, were crammed with a wild profusion of shops and businesses, past which strolled an international throng that made for a livelier street scene than anything in San Diego other than maybe the Gaslamp District during Comic Con.

Our hotel, a bed and breakfast that I’d chosen for its excellent reviews, proved attractive and warmly welcoming. And to our joy, the Nepalese agent who was supposed to be arranging our group visa, showed up just as promised. All our documents appeared to be in order. We began to believe we actually would be able to travel to Tibet on Monday morning (the most inaccessible area we’ve ever tried to visit.)

I have a friend who traveled in Nepal years ago and then returned for another visit in 2010. At the time, he expressed surprise over how much Kathmandu had deteriorated over the years. Based on this report, Steve and I were braced for substantial squalor. What we found when we strolled around confounded our expectations. The jumble of streets that make up Thamel (the tourist district) obviously are a huge magnet for trekkers and mountain climbers. Every block is jammed with outfitters and shops selling outdoor gear. They’re crammed in alongside ATMs, tattoo parlors, backpacker hotels, bars and restaurants, and shops selling jewelry, music, books, religious paintings, incense, singing bowls, t-shirts, prayer flags, prayers beads, and so much more. The folks strolling past the shops are just as intriguing: 20-something backpackers, plump Chinese tourists, Indian holy men, deformed beggars, and rugged mountaineering types who look like they’re heading for Mt. Everest to do something other than take pictures. Music and incense spill into the streets from the shopfronts, mixing with the constant chorus of honking motorbikes. The restaurant at which we ate lunch — along with every other place we ate — had a palpably cosmopolitan, if slightly grubby, stylishness (and the food was an order of magnitude more interesting than anything we ate in Bhutan).

I realize now that I shortchanged Nepal. If we’d been able to stick to our original plan and travel from Kathmandu to Lhasa overland, I would have dug into researching what we should see and do. But when the earthquake closed the Chinese land border and our stay in Nepal shrank to barely two days (because of the limited flights to Lhasa), I figured we’d simply secure a city tour through our guesthouse. By Saturday afternoon, however, we both were fighting the cold we caught in Bhutan as well as feeling that we’d overdosed on temples and guided tours. “We’re just going to take it easy and chill,” Steve declared. We would stroll around Thamel and shop and get back to serious touring in Tibet.

This worked okay Saturday afternoon and Sunday morning. The stores’ offerings enticed even Steve to shop with zeal (almost unprecedented.) By mid-afternoon, I was worn out; my cold started later than Steve’s so he’s further down the road to recovery. While I rested, he learned from Lonely Planet Nepal that the Kathmandu Valley has more World Heritage Sites than any other area on earth. There wasn’t time to see the vast majority of them, but Durbar Square — the traditional heart of the city and site of its most spectacular architectural treasures — was only a 20-minute walk from our hotel, according to the girl at the front desk. We promptly abandoned Plan Chiller and set off to find it.

And thank God we did! Within minutes Thamel’s paved streets gave way to dirt and ancient cobblestones, and we saw more evidence of where the earthquake gods had lain their heavy hands: piles of rubble, wooden braces holding up the sides of buildings, bricks stacked up for rebuilding. 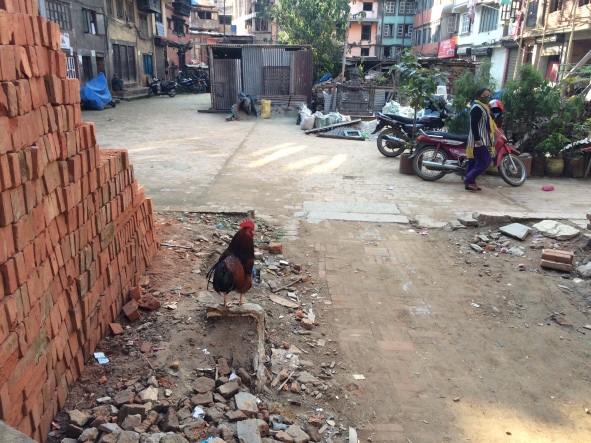 The population strolling alongside us exploded and changed from maybe 50% Nepali to more than 99%. Many shops offered cheap goods, but some items for sale — hand-beaten copperware, saris — looked as alluring as the handicrafts in the tourist zone. When we got confused about the route, people cheerfully directed us. So it was that we found our way to Durbar Square, where Nepal’s ancient kings once were crowned. We brushed aside the offers of guiding; it was too late in the day and we were too tired to digest a lot of facts. Still, the mere fact of strolling around the vast spaces and ogling the fantastic buildings gave us a hint of the past cultural and architectural glories of this country.

One amazing thing happened. Even though we didn’t hire a guide, a couple of them advised us to see the Living Goddess. We wouldn’t have had a clue who that was, were it not for the National Geographic article that Steve read (and passed on to me) a few months ago. It detailed the bizarre life of the Tantric Buddhist Nepalese virgins selected to carry out the duties of goddesshood. Once they start menstruating, these goddesses, call kumaris, must retire. (They can never be sullied by blood of any kind.) If the article mentioned that among the duties of the kumari who was the article’s central subject was routine public appearances in Durbar Square, we had completely forgotten that. We avidly made our way to the house where she lives and were told that within a minute or two, she would make her final public appearance of the day.

We weren’t allowed to take any photographs, so I have to describe what happened. From the open second-story window, the divine 10-year-old, dressed in colorful silks and wearing more eye makeup than an old-school movie star, popped into view. Looking down at the small crowd of tourists, she looked bored, then fixed her gaze on me and stared. I think this lasted for maybe 10-15 seconds, long enough to begin to make me uncomfortable. Then she abruptly wheeled about and disappeared. The Nepalese say that seeing the goddess brings good luck. Certainly we thought it as near-miraculous to come upon her appearance, as we did. If we’d tried to plan it, I can’t imagine we would have succeeded half as well.

This morning (Monday), our good fortune continued. We got driven back to the airport with no problem. We took off on time and landed in Lhasa to cloudless, sunny skies. The next phase of this high-altitude adventure has begun.

One thought on “Nepal, we hardly saw ye”