We got back safely to Thimphu yesterday around 5, after a three-hour ride that was less terrifying than our previous drive. Donna and I calculated we were frozen with fear only a dozen or so times; it probably added up to only 15 minutes of terror (in contrast with the solid two hours or so on the road between Punakha and Gangte.) Return to the nation's capital also meant a slightly better electronic link to the outside world.

In Gangte, our destination for the sacred dance festival, there was no wifi at our hotel. “You can't get it anywhere in the [Pobhjikha] Valley,” a local guide declared. As no one in Bhutan appears to have the ability to get Internet on their cell phones (worse than what we've seen most places in Africa), we were pretty much completely cut off from news of the world. The one exception came when, after we were strolling near the village, we came upon an elegant hotel with stunning views of the valley. Most of the hotels that are included in the standard daily tourist rate are pretty basic — comfortable but plain. But in recent years some luxury properties have been developed for which the 1% pay astronomical surcharges. The Gangte Lodge, at $850 per day, was one such. For that fee, you not only get a room with the killer view, but also attention from perhaps the nicest concierge I've ever met. Rosina (a pretty Argentine) gave us a tour of the property and also loaned us a set of darts so that Ugyen could demonstrate the game for us on the lodge's dart court. She let us use the swanky bathrooms and allowed us to make a reservation for a 6 p.m. prix fixe dinner. It was a splurge, but we were all ravenous for something other than the plain rice, sauteed vegetables, noodles, and stewed potatoes that seem to be the only thing on the menu at more plebeian hotels and restaurants.

It occurred to me that dinner would probably include access to the Internet (who would pay $850 a night for a room and not expect a satellite dish enabling connectivity?) I was right, and Donna and I did spend part of the meal acting like teenagers, checking our cell phones with glee. (Sadly, the food, though more varied, wasn't much tastier than that in the prole hotels.)

We didn't get connected again until we returned to Punakha. The wifi at our hotel there was sketchy, but good enough to enable me to check my email and find a disturbing message from our agent in Kathmandu — the guy securing our visas for Tibet. (It's too tedious to explain all the details here, but basically he was demanding almost $200 more for Chinese visas than he had said they would cost.) Even more disturbing was the news Howie saw in the New York Times about Nepal's border with India being closed due to political turmoil over the newly enacted Nepali constitution. The Nepali-Chinese border has been closed since May, due to the monster earthquakes, so this latest turn of events basically cut off Nepal from receiving any supplies, including gasoline, diesel, and jet fuel.

This was worrisome. Steve and I MUST get to Kathmandu in order to obtain our visas for Tibet. There's no alternative. But if the city is running out of fuel, might we be unable to get from the airport to our hotel and back? Might our flights be canceled? Could we get stuck in Kathmandu — at an ugly moment?

We've done a lot of checking since we learned this news Tuesday evening. We've communicated with our travel agent in Tibet, with the one in Kathmandu, with our Kathmandu hotel, and with the head of the international Red Cross in Nepal (who happens to be the friend of a friend and who we were/are supposed to visit there). All the above feel we'll be okay, and our Bhutanese travel operator has confirmed that our flights in and out of Nepal should be flying as scheduled. So unless the situation takes a turn for the worse, we appear to be good to go.

A bit to my amazement, this little distraction hasn't the least dampened the pleasures we've been deriving from our sightseeing outings. None of us can think of any place we've been on earth — or seen pictures of — that's more beautiful than the physical landscape here, and the man-made structures equal it. Tuesday afternoon at the huge ancient fortress (dzong) in Punakha… 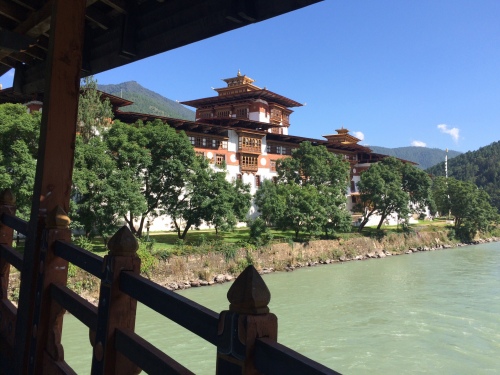 ….we spent a lot of time in the central temple — a space so vast it reminded me of Notre Dame cathedral. But instead of the relative austerity of the latter, virtually every surface in the temple was painted or carved (or both) with a staggering profusion of colors and exotic imagery. Afternoon sunshine poured in through a few of the upper windows, and thin trails of incense floated up in it.

We started off the next day by visiting a recently opened nunnery. One of its buildings is a temple not as large as the one at Punakha Dzong, but it seemed even more insanely decorated, if possible. I sat for a long time on the parquet wood floor, varnished to a high gloss, and tried to identify a single color that wasn't present in the room. I failed. In addition to all the primary and pastel hues, a plethora of textures competed for my attention: richly embroidered silk fabrics, a milky glass chandelier, hammered brass hardware. As if all this wasn't enough, outside, we found a huge crew of young Buddhist nuns clamboring all over the dome of another structure, white-washing it. At the sight of those maroon-robed, crewcut-coiffed, paintbrush-wielding young women, Howie gasped with pleasure and spent the next half-hour or more trying to capture the flurry of activity with his Sony camera. When we finally pried him away, he said it was the best photo shoot of his entire career.

There's simply too much more to describe; I don't think it's possible to communicate all we've seen and done. And tomorrow we still have one more day, a day in which we'll be climbing to the top of Bhutan's most famous monastery: the Tiger's Nest (followed by an afternoon in a traditional farmhouse). I probably won't be able to post again tomorrow, before we take off to Nepal. But if all goes well, the lines of communication there will be open and running smoothly, and I'll have some time to report.