After all the political intensity of Saturday and Sunday’s West Bank tours, our outing Monday was a welcome change. It took us to three bucolic destinations within a two-hour drive from Jerusalem, all top stops on the Israeli tourist circuit. A sweet, gentle fellow named Alon drove the mini-bus that transported us. He introduced himself by mentioning that he had grown up in Israel as a “black-hat Orthodox” (Jew) but had parted ways with that life four years ago. Although he didn’t accompany us into any of the sights, he offered a lot of commentary and explanation as he drove. He also played a number of songs over the bus’s sound system, pieces he had specially selected for various moments; they made me feel inordinately happy, rolling along.

Our first stop was Masada, the mountaintop palace fortress conjured up by that dazzling builder (and psychopath) Herod. It’s almost impossible to imagine how his workers transported all the construction materials 1400 feet almost straight up the forbidding bluff top. Only ruins of what they built 2000 years ago remain, of course, but there are enough of them (coupled with educational explanations) so you can understand how mind-boggling the completed 18-acre complex of palaces, water works, and storehouses must have been. 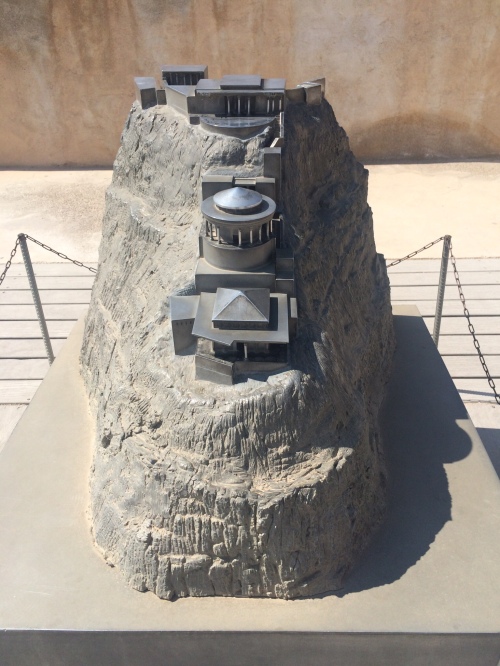 Also astounding is the fact that more than 900 of the last Jewish rebels against the Romans’ Evil Empire were able to hold out up there for years, consuming the supplies Herod had socked away. Romans soldiers spent two years building an assault ramp up to decimate the Jewish hold-outs, but rather than be captured, the rebels all killed themselves.

Like everyone else in our group, Steve and I opted to take the cable-car up, but then we hiked the Snake Path to the bottom, enjoying the panoramic views of the harsh desert landscape and nearby Dead Sea. Next stop was the oasis and nature reserve of Ein Gedi. It reminded us a lot of Palm Canyon in our own Anza Borrego Desert state park minus the hordes of shrieking orthodox Jewish girls, frolicking fully clad (athletic shoes and all) in one of the waterfalls. 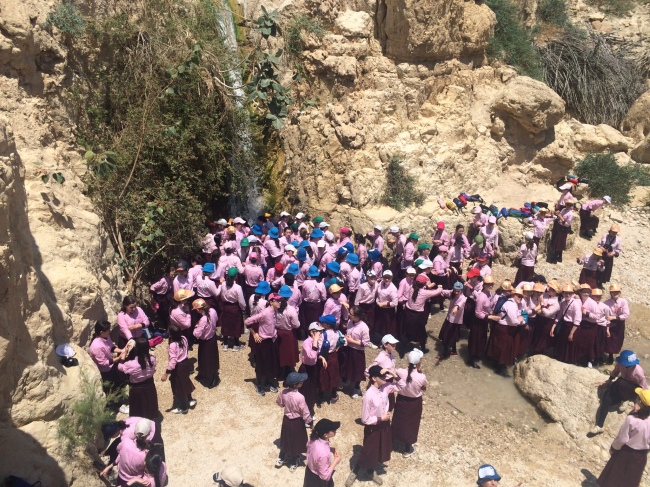 That was entertaining, but the brightest highlight of the day for me was our 90-minute stop at the Dead Sea. Steve and I had seen it once before, back in 2008, while traveling in Jordan.That day had been so snowy there was no way I could stick more than a toe in the frigid water.

Monday, in contrast, was a balmy, cloud-free day. The resort to which Alon took us was an complicated facility, including gift shops, restaurants, a swimming pool, changing rooms, and extensive picnicking and outdoor lounging areas. Alon had talked several times throughout the day about how much the Dead Sea has shrunk over the past few decades, as Israelis and Jordanians both have diverted the water that feeds it to the Jordan River Valley agricultural enterprises and settlements. Our destination near the northwest corner of the Sea (really a lake) was around 75 feet higher above the shoreline than it once had been, and we’d seen plenty of sinkholes throughout the day, another phenomenon related to the sea’s not so gradual disappearance.

It was depressing. And yet, everyone was in such high spirits. I changed into my bathing suit and descended to the waterfront. Alon had told us the famous mud that once lined much of the Sea’s shoreline also was disappearing, but he said it still could be found in this place and was renowned for its skin-rejuvenational qualities. Gingerly, I crept into the ooze and within a step or two sank so abruptly I almost toppled over with a splash. But I recovered and scooped up handfuls of the thick black goo, smearing it all over my skin, just as all the bathers in my vicinity were doing. 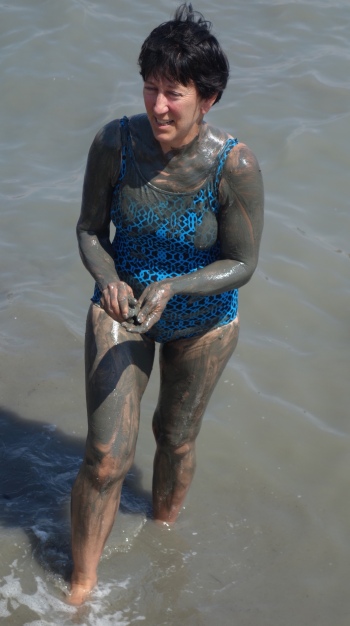 Steve took a few pictures, then joined me, and we both eased into floating positions. Even Steve’s leaden feet popped right up (normally they sink.) The Sea is 10 times saltier than the ocean — around 30 percent salt (which makes it so salty nothing can live in it, hence its name). When droplets invaded my eyes, they burned. In my mouth, they tasted beyond salty, as if they’d gone off that scale and moved into the bitter zone. The liquid in which we floated so easily wasn’t exactly bathwater warm, but somehow I didn’t feel chilly. It also had a greasy quality.

Perhaps most remarkable was the effect floating in it seemed to have on everyone, People were laughing and playing, gleeful at the ways their bodies were reacting to this weird stew. Entering the resort and changing in the dressing rooms, I’d been aware of the mix here — Palestinians and Israeli Jews and all manner of foreign tourists: Russians, Italians, Chinese, us. But in the Dead and Disappearing Sea, the tribal differences receded. Someone joked about swimming to Jordan, which looked as if it would be easy, both because Jordan was just on the other side of the lake and because not a single soldier was in sight. The water, unnatural and corrosive as it might be, seemed to be scrubbing away the rivalries and suspicion, if just for this brief dip, and It made me feel even more buoyant.

One thought on “A dip in the Dead and Disappearing Sea”