Coming from a place like San Diego, semi-desert, shriveling in the grip of our prolonged drought, the Mekong River and its gargantuan delta feel unreal. Intellectually we know how there could be so much water here; the rainy season is drawing to a close, but the skies still release drenching daily downpours. Still, making our way through this place where rivers function not just as superhighways but also as streets, as alleys, is unlike anything I've previously experienced. 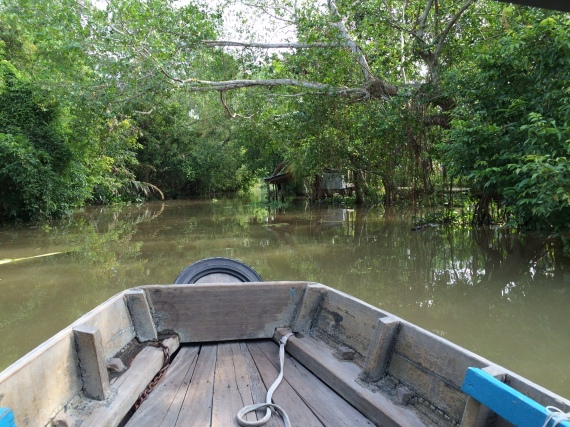 So is the way people think about all this water. On Wednesday morning, we hired a boat and guide to take us out at dawn to see some of the impromptu markets that materialize every morning on the Can Tho river (a branch of the Mekong). Boat dwellers ply the backwaters, buying melons, beans, rice, pineapples, and the myriad other foods grown by people who live along the watery byways. The boat merchants then gather, hoisting poles to which they tie examples of what they have to sell that day. Retailers from the town take boats out to buy from the wholesalers. It's a fascinating scene, and it provided us with several highly diverting hours. 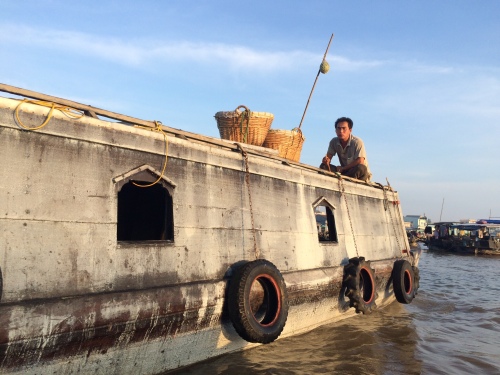 But none of what we saw astounded me as much as our guide's comments about the rainy season. He mentioned that at this time of year, the town typically floods twice a day — with every high tide. Over and over, folks living near the water see it seep into their homes and rise to a height of one foot, two, sometimes more. My immediate thought was that this was a consequence of global warning, catastrophic. But Ca's next comment suggested otherwise. “It very nice,” he said, looking serene. The floodwaters increased the supply of fish and brought in deposits of silt that made the rich soil even richer, he pointed out. Getting all their belongings up and away from the water's reach might be a nuisance, but it only lasted for a few hours each day, part of the year, and folks were used to dealing with it.

After our river tour with Ca, we caught a bus to transport us on the three-and-a-half-hour journey from Can Tho to the border town of Chau Doc. The ride was pretty ghastly. Our seats were directly behind the driver, who seemed to have a bad cold. Every few minutes, he made disgusting noises as he sucked mucus from his nasal passages, rolled down his window, and loudly spat a glob into the street. He also texted and talked on his cell phone frequently, while managing to honk several times per minute — warning the bicycles and motorbikers and cars and trucks and other buses jamming the bad roads that he was about to hit them (though he never did, despite coming very, very close). The honking irritated me, but its aggravational power paled compared to the braying nonstop programming on the big TV screen hanging from the ceiling next to us. Maybe Vietnamese sitcoms and propaganda music videos are more lovable if you speak Vietnamese. It's possible.

Still, our trip to Chau Doc was neither about the journey nor the destination; we didn't reach our guesthouse until almost 7 p.m., and we checked out barely 12 hours later. We came to catch the Hangchau Speed Boat, which would take us up the river, across the border between Vietnam and Cambodia, and on to the capital city of Phnom Penh. I'm writing this aboard the boat.

This ride is pretty noisy too, but it's all the rush of water sounds mixed with the bass notes of the boat's engine. We're not bouncing and jerking, but rather barreling along as smoothly as if we were on a jet plane rocked by only the mildest of turbulence. The only air conditioning is the natural kind. The breeze magically makes you forget that it's 90 degrees outside with 90 percent humidity. And how much more detailed and humane the views are than those available from 35,000 feet. Earlier, near Chau Doc, we saw boats of every sort: wooden skiffs and pirogues and junks and ferries and sampans. Not one single sailboat. One expensive looking cruise ship. Now the banks are lined with jungly greenery. Once in a while, a bizarrely exotic temple materializes.

Unlike another bus trip, which I would be dreading, I'm happy we'll have one final ride on the Mekong. We'll do that Saturday morning, when we travel from Phnom Penh up to Siam Reap, the site of Angkor Wat. But first we'll get to see something of this capital of the one-time killing fields.