I've never owned clothes that were made by a tailor especially for me. I've never wanted any; ready-to-wear is fine. But I'd read an account by a friend of a friend of having some things made for her while on a trip to Vietnam. That was several years ago, but when I was researching this trip, it became clear that getting tailor-made clothes still ranks high on the agenda of many visitors.

I'd read that Saigon and Hanoi both are places where you can have outfits whipped up in 24-48 hours. But Hoi An is a particular Mecca for clothes lovers, and there appeared to be plenty of other reasons to linger in this town on Vietnam's central coast. A World Heritage Site, the old quarter was said to be both atmospheric and architecturally distinguished. Superb restaurants abound. So I planned for a two-night stay during which getting some clothes made would be our central mission.

To prepare, I did some online research and found one traveler's fairly recent account of her interactions with a tailor who went by the name of “Ms. Forget-Me-Not.” She was not pushy, charged fair prices, and did excellent work, attested the writer (an exuberant looking blonde who included a photo of herself in Ms. FMN's stall — #20 in the cloth market. Some recommendation seemed better than nothing.

After arriving in town, we ate lunch at the Mermaid Restaurant, Hoi An's first restaurant (opened in 1992). Since then hundreds of others have opened, but the simple Mermaid ranks among the best. For $12 we got superb crispy wontons, thick noodles with pork, delicate seafood dumplings, and 2 16-ounce local beers. Then we walked the two blocks to the cavernous building labeled “Hoi An Cloth-Market.” From storefronts along the street, hawkers implored us to let them make our custom garments. We marched on, into the dimly lighted building, moving through narrow aisles, scanning, scanning for #20. “What number you looking for?” women shouted. “I make anything you want! Very good! very cheap!” We tried to ignore their siren cries (Come to me! To me!), but the stall numbering system was completely random. I broke down and confessed what we were looking for.

“She move,” a woman declared. Indeed in the vacant space where she led us, a sign taped to the wall announced that Ms. Forget-Me-Not could now be found at #37 Phan Chau Trinh. Our map indicated the street was just a few blocks away, so we exited, leaving a sea of disappointed seamstresses in our wake.

Within the open-front shop at #37, the walls were stuffed with thousands of fabric bolts. I recognized Ms. FMN from her photo online. She and her sister (“Rose”) and a third sister whose name I never learned greeted us warmly. I have to confess my heart sank to see they were already working with another customer, a chatty young blonde from Britain. She'd been there the year before, loved what she'd bought, and had returned for more. Within a few minutes, two more young Englishwomen joined us. I'm not sure what they wanted because by then we were immersed in the serious business of deciding what to order.

Savvy shoppers bring photos, but all I had was the notion that I should get a couple of pairs of pants made (since it's rare to find ones in any store that fit like a glove). Along the way, Steve had also persuaded me to order up an ao dai — the traditional Vietnamese slit-skirted top and pajama bottoms. I in turn insisted that he get a nice short-sleeved shirt or two. The ladies slapped big scrapbooks in front of us, filled with magazine images of all manner of clothing items. We fumbled a bit but found a couple styles we judged would do. Next we picked out fabrics — a gray checked cotton and regal jade green silk for Steve's shirts; a pretty floral crepe for my ao dai top; solid black and turquoise blends for my two pairs of slacks. Rose prised the fabrics from the jam-packed shelves and Ms. FMN told us what it would cost: $32 for each of my pants, $15 for Steve's cotton shirt and $20 for the silk one, and $55 for my complicated ao dai. That seemed fair.

Over the next hour, I began to feel like I was in a friend's workroom. Outside, the threatening skies opened up with a deluge that filled the street with maybe half a foot of water, but we were busy being measured — chests, waists, neck and crotch, multiple points along my arms and torso. Informed that we were leaving town early Saturday, the sisters told us to return at 2 p.m. the next day (Friday). When we did, we were sticky from all the walking and bicyling we'd done in the heat and humidity. My pants and ao dai top were a little hard to pull on, and I worried: were they too small? But once in place, it was clear: both my outfits and Steve's shirts fit just the way I'd hoped they would.

Ms. FMN wasn't completely satisfied. She suggested letting out the black pants by a quarter inch; adjusting the torso of the ao dai top by a smidge. We agreed to return and pick up the final products later that evening. (The sisters live upstairs over the shop.)

And so we did. We covered a lot of ground in the 22 hours we had between our first and second visits to #37 Phan Chau Trinh: visited some glorious old houses and temples, strolled the pedestrian streets bedecked with silk lanterns and lined with a million and one tempting things to buy. We hired a motorboat for a 45-minute ride on the Thu Bon river, rode creaky old bicycles past flooded rice fields and water buffalo and cranes. Ate meals that ranked among the most delicious I've ever had. Swam in an exquisite disappearing-edge pool.

But when I think back to Hoi An, I'm pretty sure what will stand out is our time joking with Ms. FMN and her sisters. (“Nice ass!” she cracked as she and I surveyed how her handiwork fit me.) I'm impressed by what an intimate and personal thing it is to craft clothes for one particular body. I expect Steve and I will wear our clothes from Hoi An for years (except for maybe that ao dai top), and every time we do, we'll feel the presence of the tailors. 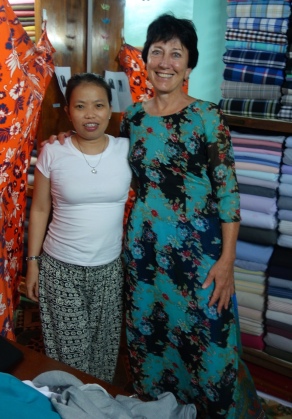