One of the coolest things about the Jemaa el Fna — the enormous public space at the heart of the Marrakech medina — is how the action changes throughout the day. When S and I walked through it about 9 Tuesday morning, we saw more henna ladies than anything else. They'll paint fancy designs on your hands and arms, supposedly with henna (but you have to watch out that they don't use the black stuff that's toxic.)

We saw only one or two snake charmers.But later that morning, when we walked through the plaza again on our way back from visiting the Artisanal Arts center and making a brief foray into the souks, I counted several more of the serpent guys, and I paid 10 dirham (about $1.25) to take this photo:

My photographic subject explained that the erect black snake (swaying cartoon-style to the accompanying piping) was a cobra. The other snakes (on another part of the rug) were vipers. “Oh like rattle snakes!” Steve exclaimed. He asked if the rattled. The snake charmer told us that they do not. Only American vipers do that.

These were real cobras and vipers, mind you. And other men had what looked to me to be real Barbary apes, wearing diapers and trained to pose with photographic subjects on demand. If the snakes and monkeys were clearly there for the tourists, almost everything else in the plaza seemed intended for local consumption. There are the “dentists,” for example, who sit at tables laden with dentures…and a pair of pliers. We paid another 10 dirhams to photograph this fellow:

He was kind enough to show us what was under the folded paper napkin in the lower right-hand corner of his table: still blood-stained teeth that he'd “extracted' that very morning.

At 1 p.m. every day, the square becomes off-limits to cars and vans, though motor scooters can still zoom through, pumping out noise and air pollutants and threatening the limbs and lives of everyone on foot. Through the afternoon, the entertainment grows more and more diversified. We saw fortune-tellers and musicians, along with the restaurant touts and portrait painters and orange juicers and snack vendors. About 6 p.m. a huge section of the square begins to fill with tents under which dozens of “restaurants” operate. Once it's dark, the smoke and enticing smells from them rise up and roil, a delicious miasma into which hawkers occasionally launch high-flying glow-in-the-dark toys.

On Monday night, Steve and I had walked about 10 minutes from the square to find a simple Moroccan restaurant recommended by a friend. But when we'd passed through the square, we'd been assailed by at least two dozen touts, each insisting that his employer's restaurant was the best. We'd told everyone “Maybe later.” But we'd been struck by how the places that were jammed with mainly locals didn't seem to have any touts — probably because their good reputations were pulled regular customers in.

So when we returned to the square around dinner time yesterday (Tuesday), we headed to one of those — #14, specializing in fish and chips. It looked like every seat was packed, but then one of the workers waved us to open spots way in the back, at one of the long picnic tables. He slapped rectangles of butcher's paper in front of us both and tossed on them pieces of the Moroccan rolls that look like giant flattened hamburger buns. 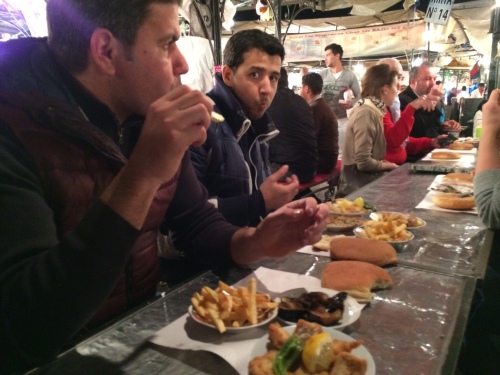 We'd failed to study the little menu/sign in front of this stall, but the guy serving our section took command, delivering a little plate of tasty mashed roasted eggplant, then pureed fresh tomatoes, then a pile of fried fish chunks that, if bony, tasted very fresh. The pile of fries that he brought were good too. All that would have been enough, but he also dropped off a plate of fried calamari (which we later learned cost 30 dirhams — about $3.75 — by itself.)

The total tab was 70 dirhams (about $8.66) including the tip we left for our whirligig of a waiter. It seemed to me at least as good as any dinner S and I ever had at McDonalds — at least as fast (slapdash, even!), more gastronomically interesting, more sociable, cheaper.

Walking home I wished we spoke Arabic. I would have loved to understand what the storytellers were saying to enthrall the crowds that they were drawing. But with luck we'll have our own tale of adventure to tell this evening. We're off to eat breakfast now, then we're supposed to meet Jawad from Morrococar to rent a vehicle that we'll drive through the Atlas Mountains (today), then on to the oases and the desert beyond.