Because Steve loves boats so much, he wanted to write about our trip down Lake Kivu yesterday (Saturday). Here's his report:

We had read that the road down the Eastern shore of Lake Kivu is so bad it takes two days to drive from Gisenyi to Nyungwe national park. So we'd arranged with Tom Tofield's Rwandan Adventures to take a boat most of the distance, enabling us to get there in six hours.

Lake Kivu has given me the creeps ever since I read in the National Geographic that it contains a vast amount of dissolved methane and CO2. These greenhouse gasses are held at the bottom of the lake by the pressure of the water above. Because no seasonal thermal mixing occurs, as it does in most lakes, the gasses have not escaped. As organic matter enters the lake, it decomposes, adding to the layer of methane and CO2. At some point, scientists believe that the pressure of the dissolved gasses will exceed the pressure of the water on top of them, and the gasses will rush out the way bubbles rush out of a beer or Coke bottle that has been shaken before opening.

Because CO2 is heavier than air, it would remain near the ground, suffocating anyone near the lake shore. This sort of thing has happened before in smaller lakes, killing several thousands. But with well over a million people living in Gisenyi and neighboring Goma across the Congo border, the death toll from a gas release at Lake Kivu could number hundreds of thousands.

It turns out my fears were overblown. Tom's wife, Natasha, has earned a doctorate studying the lake and says a gas release might not occur for 100 years. Moreover, efforts are underway to release gas from the lake artificially using new technology similar to that used to separate natural gas from oil. From the shore near our hotel, we could see a prototype production platform that's recovering methane from the lake and sending it to the shore to fire electric generators. In the future, the natural gas may be bottled to use as cooking fuel, saving more trees from being turned into charcoal. 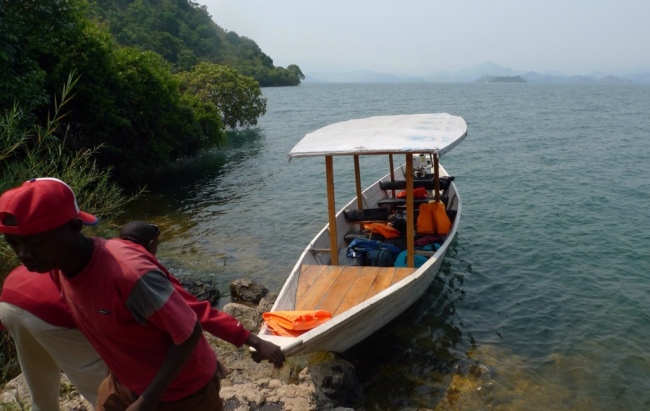 On Saturday morning, Tom's boat man, Suleiman and his crew man, Jean Claude, showed up at 8:30 am. We departed at 9:10. Suleiman's family's boat is a double-ended skiff about 30 feet long fashioned from wooden planks about one inch thick and eight inches wide. These are caulked with local fibers and some sort of tar, much the way Christopher Columbus's ships were. Equipped with a late model 35-horsepower Honda outboard motor bolted to a well in the stern, the boat has a sun shade fashioned from tents scavenged from the UN High Commissioner for Refugees. Some fake leather seats completed our creature comforts.

As we set off down the lake, the wind was out of the south and the boat pounded in the light chop. Later, as the wind shifted west, the spray came over the starboard gunnel, causing us to break out our raincoats and cover our cameras.

We saw larger wooden boats of similar design, each carrying several dozens of passengers. Because the roads are so bad, the lake is a cheap and convenient mode of transport for local people. Yet even so, boat traffic was light. Most of the boats on the lake are paddle-powered fishing craft that depart at dusk and return at dawn. Despite the breeze, we didn't see one sailboat.

On our way south we stopped at a small, uninhabited island off the coast of Kibuye, a medium-sized town that marks the half-way point down the lake. Our mission was to view a colony of fruit bats that live only in this spot. Suleiman nosed the boat into a clear spot on the shore, and Jean Claude led us up a steep narrow path through thick low forest to see the bats. Unlike most insect-eating bats, these creatures are diurnal, and our approach startled them from their inverted perches in the trees. They circled overhead like flocks of crows or seagulls, their high-pitched barks sounding more like foxes than birds. The bats made an amazing sight, in their own way as unique and unusual as the chimps and gorillas, but completely unexpected.

After half an hour, we re-boarded the boat and continued south. The wind died and the waves shrank to tiny ripples. We took off our rain gear and had a lunch of beignets, cheese, and bananas that we shared with our boat men. We covered the rest of the distance to the tiny town of Nyamasheke on a small bay off the lake. There we were met by the driver of a Toyota RAV4 SUV who drive us to the Nyungwe Forest Lodge. We arrived by 3:15 pm, in time to enjoy the incredible views of the forest before sunset.

3 thoughts on “By boat down Lake Kivu”