Our epic gorilla trek took place Tuesday. Wednesday we met some of the people whom the gorillas displaced. Of course, it wasn't the gorillas who did it, but about 20 years ago, the Ugandan government ordered all the pygmies to move out of the forests that had been their home for millennia. The last of the hunter-gatherers in this part of the world, the Batwa (as they call themselves; pygmy is the word the English applied to them) had always co-existed with the forest creatures. But as an exploding human population drove more and more people to cut down forests and farm, and the once boundless rainforest was reduced to mere islands, it was felt that the Batwa were putting too much pressure on what was left. So they were kicked out and forced onto the African equivalent of reservations. It was probably good for the gorillas and other forest animals and good for the non-Batwa Ugandans. Gorilla tourism is an economic engine, benefitting many ordinary folks. But it's been devastating for the remaining Batwa.

One effort intended to help them preserve some remnant of their culture (and earn money) has been the creation of what's called the Batwa Trail. This is what S and I signed up for.After a bit of a muddle over where we would start (there are two trail heads), we all assembled at the one withIn Mugahinga National Park. We set off with a ranger/translator (Benjamin), the two standard AK47-toting guards, and four Batwa ranging in age from 36 to 51. They had all grown up in this non-materialist culture (where you built your home from sticks and leaves and inhabited it for just a few months before moving on with just what you could carry.) 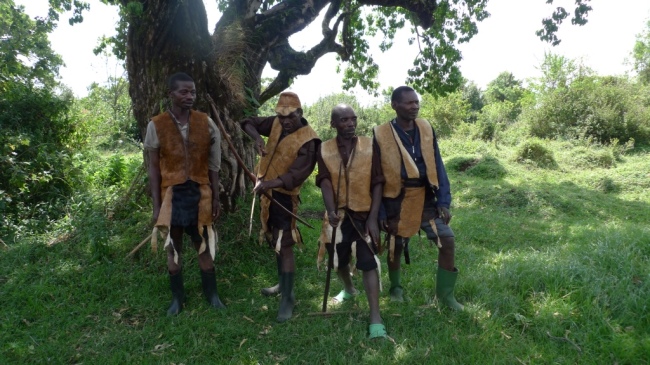 They all wore clothes made of animal-skins. Two of the four carried weapons (a spear and bow and arrow). To my surprise, they weren't terribly small — maybe in the low 5-foot range. They led us briskly down a trail strewn with fresh-looking Cape Buffalo dung. I found myself thinking that it would be exciting to encounter one (and have one of the guards scare it away!) But the most menacing creatures we saw were legions of safari (aka fire) ants. We both avoided being bitten by any, thanks to the solicitous warnings of the Batwa.

They proved even better at entertaining us. Steven, the leader, had enormous presence, and in the course of frequent stops, he and the other fellows explained the use of various plants both for sustenance and medicine. Much more unexpected (and entertaining) was the way his comrades acted out various scenarios from their former life: setting a snare (and accidentally getting caught in it – har-har!); using a dog bedecked with bells (played by one of the guys) to catch a wild animals (played by a carved wooden hippo). “They're like the Marx Brothers!” Steve whispered to me at one point.

The grand finale took us into a huge underground lava tube where the Batwa king used to hang out and his subjects stored crops plundered from surrounding farms. Normally, Batwa ladies hidden in the cave's inky inner recesses surprise visitors by singing, softly at first and then building to a rousing conclusion. But they weren't there on this particular day; someone said something about their having to go get food instead. I was a little disappointed, but 6 ladies were assembled when we emerged from the cave and they gave us at least a taste of what we had missed.

The guys and we also had shared our own magic moment a little earlier, when we had stopped in a clearing. They gave us a wildly animated demonstration of how they started fires, using two sticks. Then we all flopped down in an ant-free patch of ground to eat our picnic lunches. Steve and I asked lots of questions, and they seemed happy to answer. Then it occurred to me that they might enjoy hearing how we had learned about them. Benjamin translated as I described driving in my car one day several months ago and listening to an NPR reporter who also had experienced the Batwa Trail. Intrigued, I had googled them when I got home. What I read had made me resolve to find them. We all laughed at the crazy connections. “You're famous!” I told them. Their eyes shone. I promised to tell other people about them, and they liked that a lot.