I'm writing this as we jounce along over badly gouged dirt roads on our way from Kibale to Queen Elizabeth NP. It's the third morning we've awakened in Uganda, and I found myself wondering: why are we here? And: why aren't more Americans?

I think the answer to the second question is that all that most Americans know about this place, if they know anything (if they saw The Last King of Scotland or are old enough to have lived at the time of the history it recounted) is that the country endured a long spell of lunatic violence under Idi Amin, and later, devastating civil war. Also, “We have no writers!” as our driver/guide Robert pointed out yesterday over lunch. Meaning, I took it, no white foreign Afropromoters like Isaak DInesen or Beryl Markham or Ernest Hemingway to propel Uganda into the consciousness of farflung tourists.

Why Steve and I are here nonetheless is a mixed bag of reasons. We flew here using frequent flier miles, and American's partner, British Airways, serves Entebbe. We know people who've been to Rwanda in recent years, and their reports made me want to go there. Uganda borders it, and as I began reading about the region, the enthusiasm expressed by recent travelers here impressed me. Now that we've begun to explore it, I understand why Uganda had been called the pearl of Africa. This place is a hidden gem, a lustrous surpprise, something you feel thrilled and grateful to discover.

It's physically breathtaking, maybe the most beautiful landscape I've seen anywhere: rolling hills and muscular mountains, crater lakes and deep valleys, and everything so green, a hundred shades of it. Unlike the Omo Valley in Ethiopia, this land is gaudily, opulently fertile, In the last two days, we've passed plantations growing a half dozen varieties of bananas, but also tea and coffee, as well as farmers growing pineapple, avocados, papaya, sorghum, watermelon, corn, mangos, beans, tobacco, tomatoes, cucumbers, vanilla, melons, and more, Robert says all the beef, chicken, fish, pork, rice, flour, oil (sunflower and corn), and virtually everything else we've been eating or will eat during our stay here was grown in this country the size of Oregon. Mixed in with the agricultural abundance, as if the land was so potently fecund it simply couldn't control itself, are brilliant tropical flowers that attract jewel-like butterflies and more than a thousand (!) species of tropical birds.

We drank in all these sites on the long drive Wednesday from Entebbe to the Chimpanzee Forest Guesthouse, along with the endlessly diverting pageantry of life along African roads: farmers carrying produce to tiny village markets, pilgrims converging on a religious festival, mini-buses bursting with passengers and dodging the motorscooters that serve as the taxis for urban areas. (We assumed their name — “boda-bodas” — came from the sound they make, but Robert says it sprang from their origin in Kenya, where they travel from border-to-border.) We didn't notice any traditional billboards, but Robert pointed out that Ugandans use a cheaper alternative. Various companies pay home- and shop-owners to paint their residences with brilliant colors and announcements about their products. “Airtel,” they shriek, or “Sadolin,” and it doesn't mean you can buy Airtel minutes or Sadolin paint there. They're just adspace, rented for a certain period of time (and then covered over with a fresh, noncommercial coating as part of the arrangement.)

By mid-afternoon, we were deep into the country, in a more heavily forested region. At one point, Robert slowed the Land Cruiser, and it took me a beat or two to realize that the dark forms next to the side of the road were a troupe of wild olive baboons. They barely blinked as we photographed them, just a few feet away. 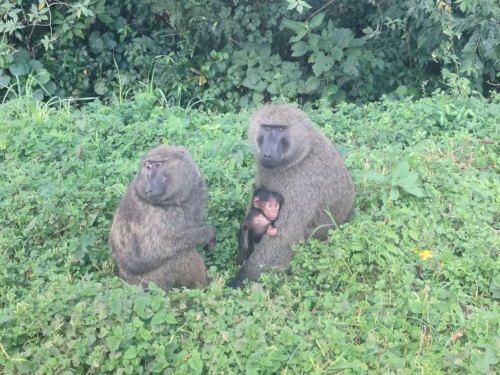 About the Chimpanzee Forest Guesthouse, where we stayed for two nights, let me only say that it was wonderful, with excellent food, attentive service (we were the only guests the second night), lovely gardens, and beautiful views in every direction. About that chimpanzee forest… well, that deserves a post of its own. 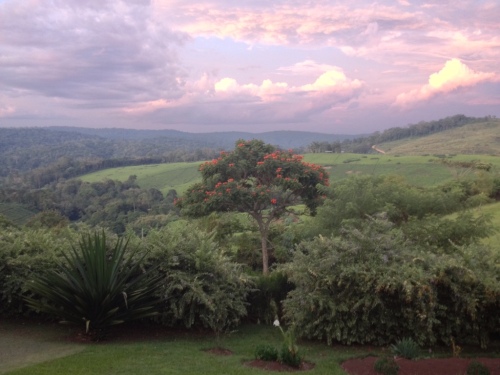 3 thoughts on “On the road, Ugandan-style”