Who associates Uganda with big game? I never did. Mountain gorillas, maybe. But sweeping savannah dotted with grazing elephants and antelope? We were startled when yesterday we saw all that and more.

I had expected the day to be somewhat tedious, one in which our main objective would be to travel from our lodging near the chimpanzee forest down to the southern end of Queen Elizabeth National Park. Originally, I'd planned an itinerary that would have had us stop in the middle of the park and then enjoy a day of game driving. But an opportunity arose to be useful to Women's Empowerment (WE) International — the San Diego-based microlending organization we've admired since its inception — so we jumped at it and cancelled the park day. We would only stop at the southern end to break up the long journey to Nyaka village and its grannies who were potential recipients of WE's micro-loan funds.

The Land Cruiser carried us down from the mountains and southward, taking us across the equator (photo op!) a bit after 11. Lunch was at the tent camp adjoining a large channel between two lakes where we'd originally planned to stay. It looked lovely, and it would have been thrilling to watch the hippos come into the camp for their nightly grazing session (reportedly they don't bother humans who don't threaten them.) But we pushed on, and it was then that we began spotting the elephants, antelopes, cape buffalo, baboons, and monkeys.

Before making the final approach to the simple camp where we were staying, Robert surprised us by announcing we'd make a quick sweep of one area of the national park to look for lions lounging in fig trees –the most sought-after tourist attraction in this area. It was a long shot; Robert said he'd spent days on some previous trips looking for them with no success.

All lions can climb trees, he pointed out. But what makes the Ishasha area of the national park famous for its tree-climbing lions is that a few huge fig trees are scattered (widely) amidst the legions of acacia. And, unlike the short acacias, the mature fig trees grow stout horizontal branches that make wonderful resting places for lions. High off the ground, they're well-positioned to catch a cool breeze, escape attack from the tsetse flies that infest this area, and spot the most likely direction in which dinner might lie, come the evening hunting session.

Robert had popped up the top of the Land Cruiser, and Steve and I stood up, finding it not unlike jogging through the savannah — without having to exert any more effort than that required to avoid being jounced out. We'd driven for maybe 20 minutes, and I had just muttered to Steve that I didn't see ANY fig trees, when he retorted, “There's one!” The path took us around a bend and up to the tree — which was occupied by three beautiful lions. 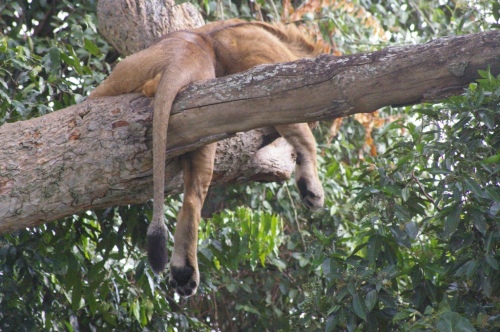 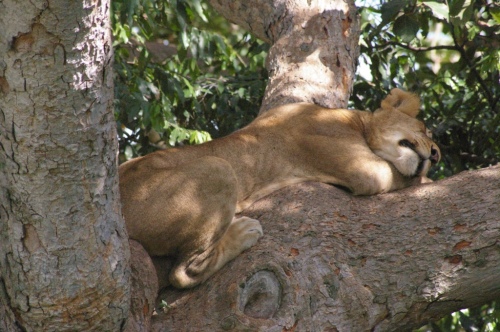 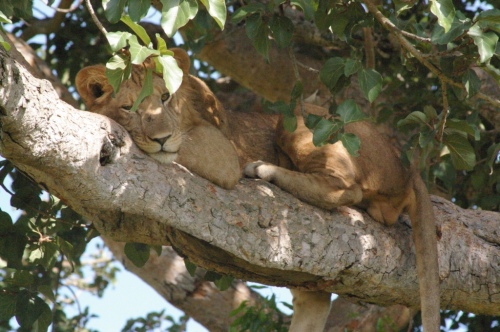 I'm sorry, but if there's anything cuter than drowsy giant cats draped over fig branches, I don't know what. Robert told us these were a mom and her two youngsters, male and female. They all were dozing, loose-limbed and looking so comfy I imagined if we could just get a bit closer, we'd hear the purring (assuming that lions purr.) we spent a long time drinking in the sight, while Robert shared some lion lore, asserting, for example, that they'll never attack, as long as you're staring in the eyes. (Conversely, you NEVER want to run.)

Finally, we pulled away, and Robert drove us to the banks of the Ishasa River, where on the far bank, the Democratic Republic of the Congo looked close enough to be hittable by someone with a good arm and a pebble. Hippos often play on these banks, but all we could see were two hippo head tops and four pairs of ears that emerged and then re-submerged in the distance.

So we pushed on to our rest stop for the night, a homely but well-tended collection of tents and “chalets” overlooking another nearby river, the Ntungwe. The only guests, we sat in an elevated pavilion, drinking in the splendid countryside and, after sunset, dining on excellent roast goat, assorted vegetables, rice, and the most delicious banana dessert I've ever tasted.

I slept well, though I had my earplugs in. I never heard the chomping noises or the raucous cries of young men. I only heard about them from the plump young American property manager. A recent international studies graduate, she recently took this gig after completing a 6-month stint with a Kampala-based NGO. She thought the chomping was a hippo, and commented, “It sounded close!” I was just as happy to have missed it. I prefer for my encounters with wild animals to be during the day — and for the wild animals to be exclusively non-human.