Ethiopia has an awful lot going against it. While long and colorful, its history has had several hideous chapters, and even today little protects the rights of ordinary citizens. Many of its 80-plus million residents live in dismal poverty, and the deformed beggars are appalling. The pickpockets are wily and skillful (Steve has now added Addis to his growing collection of Places Where His Pocket Has Been Picked). To me, though, the worst thing about Ethiopia is the abysmal quality of the air.

In the country, riding through hour after hour of powdery road dust and breathing the smoke of indoor wood fires at night gave both of us coughs that still are plaguing us. Here in Addis (elevation 7,500 feet), the already thin air reeks of diesel and gasoline fumes churned up along with road dust, construction dust, cooking fires, and all the unburned hydrocarbons, oxides of nitrogen, carbon monoxide, and other substances that modern air-pollution-control devices mostly have purged from the developed world’s air. Walking home this afternoon, both of us felt a tightness in our chests. For the first time since our arrival, I yearned to leave.

Otherwise, our stay in the capital has been satisfying. Although plain, the Addis Guest House has dazzled us with its amenities: transport to and from the airport (only 5 minutes away), good breakfasts, laundry service, ubiquitous wi-fi, and an amazingly friendly staff managed by a guy who literally grew up in San Diego before returning to Ethiopia at 22. All this for $55 a night. This morning Jonas also helped us secure a driver/guide who took us to the enormous Merkato district, where we walked among the wholesalers of everything from mustard seeds to mattresses. Then we drove to the main campus of the university, to visit the Ethnographic Museum housed in a former palace of Emperor Haile Selassie. While it was okay, we felt like our Omo Valley trip had already exposed us to much of the content, and more vividly.

After lunch, Steve and I decided to forego a stop at the National Museum in lieu of visiting a much newer facility next to Meskel Square about which we’d heard from a fellow traveler in Harar. The “Red Terror” Martyrs Memorial Museum 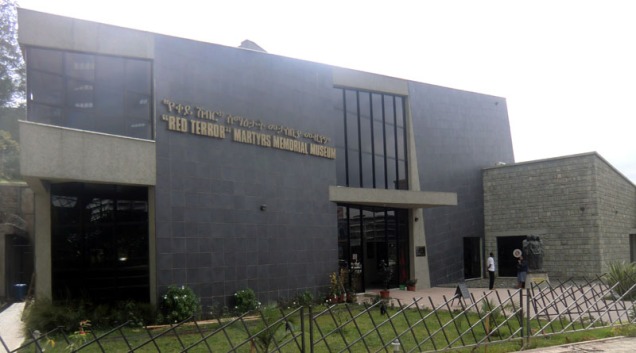 describes the horrors that unfolded after Haile Selassie was assassinated in 1974 and Ethiopian Stalinists unleashed their barbarities. The docent who was there when we visited had spent 8 years in one of their prisons. The suffering he recounted moved me deeply; I was glad to be able to bear witness to what he endured.

We walked home along Bole Road, the artery feeding the homes of some of this country’s wealthiest families. We passed on 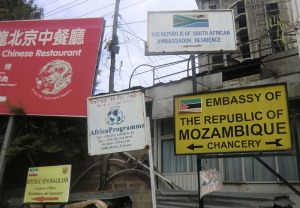 e weird embassy after another (Cameroon! Ukraine! North Korea! Angola! Congo!) The multiplex at the Edna Mall was showing War Horse, along with J. Edgar (neither one of which we’ve seen yet). In a nearby gourmet cupcake shop, we broke down and bought “double choc” and red-velvet goodies — the first true desserts we’ve eaten since Christmas in San Diego. 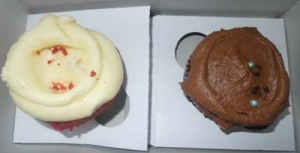 s were good, though I expect we’ll get better in Frankfurt tonight. What Frankfurt (or San Diego) can’t match is the chaos of Addis Ababa. Most Germans and Americans would probably be revolted by it, and God knows I wouldn’t want to live here. But the grace with which the Ethiopians cope with it provides me with endless amusement — and admiration.

Here’s one example: when we went out for dinner Sunday night, we found a taxi whose driver sounded like he might know where the restaurant was. We bargained with him over the price, struck a deal, then piled in. Only when I took my seat in the back did I notice the 3-year-old girl strapped in next to me. She was impeccably dressed, wearing shiny zebra-striped shoes and other finery. She sat silent; drowsy but conscious. The driver (her dad)  made it clear that he adored her; indeed her name in Amharic meant “love.” Then, apologetically, he asked if we would mind if he dropped her off at his home. We told him to go ahead, and he turned off the main street, driving down unpaved roads illuminated only by our headlights and the occasional cooking fire. After a couple of minutes, he pulled up to a gate, scooped up the now-nodding toddler, and tenderly deposited her in the arms of a waiting woman.

We sped off, and not long after, we approached the street where our restaurant was located (our taxi driver in fact hadn’t known it, but he called a friend who did.) But there had been an accident, and cars from every direction were stalled, while the driver of one of the injured cars made chalk marks in the street to record what had happened. It seemed a colossal mess, the sort of thing that would halt everyone’s progress for hours, were it in San Diego or New York. But within minutes, the damaged car limped off, and our taxi driver moved centimeter by centimeter into the automotive mosh pit. Somehow he made the turn and deposited us at the Jewel of India only minutes after our 7 p.m. reservation. The food was spicy but delicious.