Because it’s the dry season and the road was not too swampy, we were able to take a different route out of the Omo Valley. The advantage of this was that we got to visit yet another tribe, the Earbore. Like most of our other tribal encounters, we spent no more than 45 minutes in the village.  We photographed several people; visited a hut. 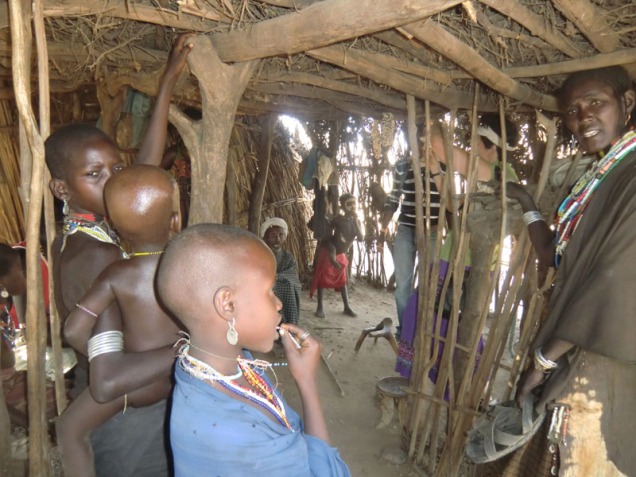 Having realized that my camera could inconspicuously capture video images, Endalk cavorted with a pack of children, teasing them with candies, to provide us with lots of lively action. Then we took to the road again.

The four hard hours to climb out of the valley and labor over the bad roads back to Arba Minch gave me plenty of opportunity to reflect on the whole peculiar experience of visiting the South Omo tribes. As a tourist, your interactions with these people are so limited. To view it in the worst light (as I suggested in an earlier post), it resembles hunting for photographic big game — human rather than bestial. It feels like there’s no real way to connect with any of the villagers, other than the smile exchanges that sometimes feel genuine and warm. Maybe if we camped in the villages, as I’ve heard some people do, it would be different. Certainly it would if you lived in one for months, conducting anthropological research. Neither of those options appealed to me, and while the limitations of what we did see and do are obvious, I feel satisfied.

Plenty of exchanges in the Western world are superficial. Walk into a hardware store or a hair salon or a movie theatre, and how deep is your encounter with the people in any of them? If you’re in a different country, outside your own culture, it’s even harder to discern the person beneath the functionary. And few cultures are more different from ours than those of the Omo Valley peoples.

The fact that they’ve learned to charge for serving as photographic subjects can heighten the sense that we’re using one another. I’ve heard other tourists comment on how tourism has “ruined” the tribes, making them rapacious and corrupting once-innocent interactions. I see it differently. As Steve observed at one point, the Omo Valley tribespeople own almost nothing EXCEPT for their intellectual property: the fantastic ways in which they dress and ornament their bodies. They have the means to defend that property (by banishing or even punishing those who refuse to pay up.) If they sell access to their designs to get things they want (be that razor blades or bullets or candies or cell phones), who am I to criticize them? How does their behavior differ from that of Lady Gaga or Justin Bieber?

Another topic that surfaces among Omo Valley travelers is how long these cultures will survive. The powers-that-be are building a dam on the upper Omo, and it may affect some of the tribal agricultural practices. A new (paved!) road heading south to Kenya is also in the works.  Cell phone towers are sprouting throughout the Valley, and some folks, like that Bodi chief, already have phones too. As the contact with outsiders increases, as they see images of how everyone else in the world dresses and acts, for how much longer will they cling to their harsh prehistoric lifestyles? As do others, I hear the clock ticking, counting down the time that’s left for the way they’ve lived for so long. But while it still exists, I feel fortunate to have seen it.