One of the marks of travel competence, in my opinion, is being able to figure out how to have fun, even when circumstances change and the setting is unlikely.  We had a small test of that ability yesterday, and we passed.

To simplify our journey into the Saloum Delta, we had decided to leave Popenguine Wednesday morning, travel to Kaolack, and spend the night there. We knew Laura and Albie expected to pass through Kaolack around 3 p.m. Thursday, and arriving the night before would relieve us of any stress about missing that connection.

The only problem was this meant we would have to spend most of the day in Kaolack, a great crossroads of Senegal but by all accounts a singularly lackluster town. (The French proprietress of the Balafon, our hotel in Popenguine, had wrinkled her nose when asked how long it would take to travel there. She never went, she said, because why would anyone want to?)

You might not travel to Kaolack to stay at Le Relais.  But apart from the unpleasant smell that permeated the town upon our arrival, the hotel seemed to us an excellent way station.  Well-tended gardens filled much of the grounds, and the pool was large and welcoming, if a bit murky. Our room, which cost about $65 a night boasted air conditioning, a TV, and hot water, and a shower that worked well.  Although the power went out almost immediately after our arrival, the sound of a generator kicked in around dusk, and we ate excellent fish and surfed the internet on our laptops in the huge, well-lighted dining room. 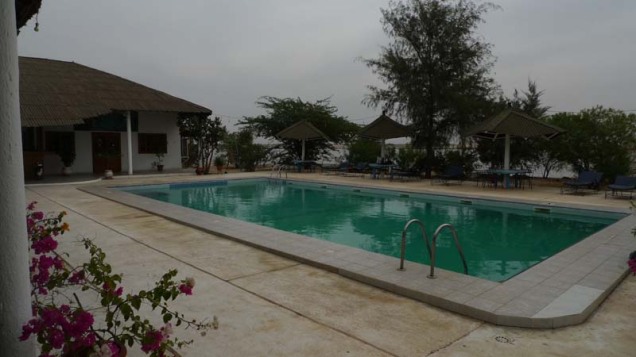 We’d read in the Rough Guide that Kaolack’s two principal “sights” were its covered central market (“one of the largest in all of West Africa,”) and its mosque.  So the next morning we asked the friendly receptionist if he could help us secure a taxi to drive us to them and wait while we visited both.  He called a young man named Moussa who arrived in a clean, well-maintained Toyota Echo and said he’d serve as our chauffeur for 10,000 CFA (roughly $21). We bargained this price down to half, then set off.

Although we’d told Moussa he didn’t have to act as a guide, when we arrived at the central market, he seemed eager to accompany us, and as it turned out, we were happy to let him lead us the dark, crowded, fetid labyrinth. On Moussa’s heels, we both felt relaxed scanning the tiny stalls filled with fabulous fabrics, flip-flips, recycled glass bottles, live poultry, spices, grains, fruit, jewelry, and a thousand other goods. Some of the vendors assailed us, but far less aggressively than the touts in Egypt.

We did make two purchases — several oranges, tangerines, and bananas (for just under $3), and 3 small but charming necklaces.  Asked a ridiculous 10,000 for the latter we refused, but when I got the price down to 3500, I accepted. High drama erupted, however, when I started to pay: violent shouting between Moussa and the seller, culminating in Moussa snatching the money and signaling us to stomp off behind him. A bit further on, he found identical necklaces being sold by some ladies — for which I paid 1500. (Apparently the injustice of the first price was too intolerable for him to bear.)

Our visit to the mosque played out differently. Moussa quickly found two guides to lead us through it — one tall and haughty and French-speaking and the other with an ebullient command of English. I was stunned by the beauty of the interior — as vast, I think, as the great mosques in central Cairo, and ornamented with glowing stained glass, huge ornate chandeliers, intricate Moroccan woodwork, and acres of pristine Persian-style carpeting. We left our shoes at the door and I wore Steve’s safari hat, but that’s where the formality ended. They seemed proud to be showing off the place, and they insisted we photograph one detail after another. Here are two: 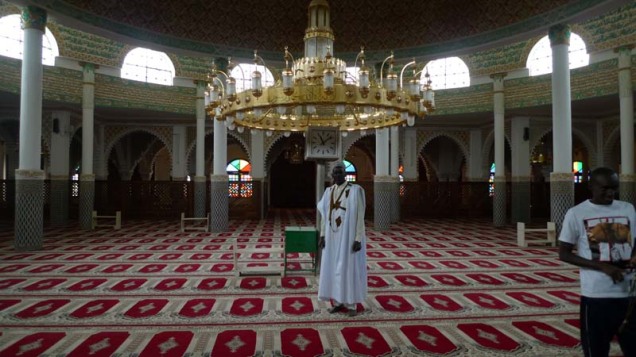 One thought on “Travel Quiz”