Tuesday, December 28
One of the first characters we met here yesterday morning was a young woman named Ardyce (I may be misspelling her name). She was a member of the group of 8 who made the trip yesterday morning from Dakar to Bandia National Park (a 70-minute ride from the capital, and billed as a cheap and easy way to sample an African safari in Senegal.) Steve and I sat with her in the back of our taxi: Ardyce’s mom, visiting from Florida, got the front seat. I think Ardyce was about 24, graduated with a masters in journalism last summer and now on a Rotary scholarship to work and study in Senegal. She wants to be a foreign correspondent and told me Dakar wasn’t a bad place to try to launch such a career. She acknowledged that the city had many awful, trying aspects; in her first weeks, she had called home every day weeping and ready to return to the US.  But now, after just 4 months of living in it, she had grown so attached to the place that it was painful to think of leaving.  The only complication was that she had a boyfriend back in the US, and she wasn’t sure how he’d feel about settling down in Africa. 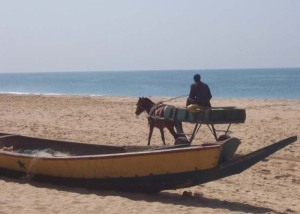 Ironically, Steve got into a conversation today with a young African that touched upon the same theme.  After visiting the park yesterday, we moved on to Popenguine, the nearby beach town on Senegal’s “Little Coast.” We’re happily installed at the Balafon lodge ($32 a night), and after a long breakfast this morning at the wifi cafe on the beach below our hotel, Steve took off alone to stroll around the tiny village.  His young conversational partner (who spoke French and bits of English) asked Steve why he didn’t move here. Steve later recounted that he had answered that Popenguine was just like his home back in the US.  I snorted that that was ludicrous.  I knew Steve was thinking that this place is hot and sunny and lush with many of the same plants that have been transplanted to San Diego (rampant bougainvillea!).  But the streets are also dirt, and boys deliver bottles of water driving horse drawn carts, and the girls and women walk around with baskets on their heads. The power went out about 9 last night, so when we got back to our room after dinner (fish caught with nets from the beach, earlier that afternoon), we had to shower by kerosene lantern.  The water was unheated.

It struck me that just those sorts of differences, added together, constitute culture shock. On your first trip to Paris, the fact that everyone speaks French and the elevators are tiny might make you experience it. But the more you travel and the greater the part of the world you see, the areas of culture shock shrink. I’ve spent so much time in Europe over the years, I imagine I’d feel only a shadow of it were I to visit Hungary (even though I’ve never been there.)

Still, even though Steve and I were hiking on the Wild Coast of South Africa only 10 months ago, I’m once again experiencing the shock of being in Africa. It’s not unpleasant. On the contrary, for me, one of the greatest pleasures of travel is being jolted by sights and sounds and smells that are shockingly new to me — they sharpen my senses and bring me most fully into the present moment.

They burn experiences into my memory such as our arrival at Dakar Airport. After touching down about 9:30, we moved hassle-free through customs and immediately found our luggage wheeling around on the carousel.  Then we had to go through a bizarre drill of hoisting it onto a conveyor belt. Our suitcases traveled through a large black box and emerged past a fat guy in a security uniform who was paying no attention at all to any of it or us.  But apparently someone in Senegal felt this charade was necessary before tourist could be allowed into the arrivals hall.

I couldn’t figure out how to get my I-phone to either text OR phone our B&B, so I finally mustered the courage to approach an enormous policeman who looked like he could have been Idi Amin’s bodyguard and ask if I could borrow his cell phone. Looking disgusted, he dialed for me but at almost the same moment, our pre-arranged driver materialized.

Bada turned out to be warm, welcoming fellow, and after helping us change money and buy a SIM card, he led us to a scarily dark and run-down parking lot and ushered us into a cab.  Then he climbed on his motorscooter and drove off. Our taxi driver followed his single taillight through the crumbling streets of major thoroughfares, then turned into narrower creepier streets. It was pitch-black when we arrived at the B&B, unloaded our suitcases from the trunk, and hefted them through the fine dust of the street and into the pitch-black building.

It turned out that Dakar was also experiencing yet another power outage. In the morning the world was sunny and warm and everything looked much more welcoming. Now, sitting in the cool breeze of Popenguine and typing these words to the sound of the surf below, I’m already so comfortable I’ve started to take for granted things like the adjoining unfinished rooftop, bristling with rebar and unconnected power lines. That’s a bit of a shame, but I think we’ll get to experience more novelties in the coming days. Enough, I trust, to keep us awake. 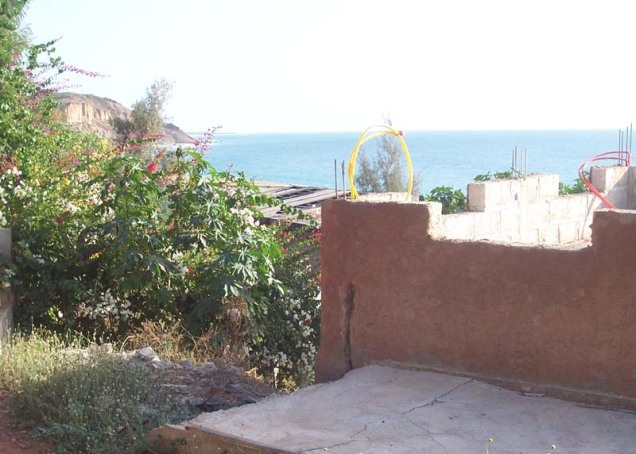 2 thoughts on “Moving to Senegal”